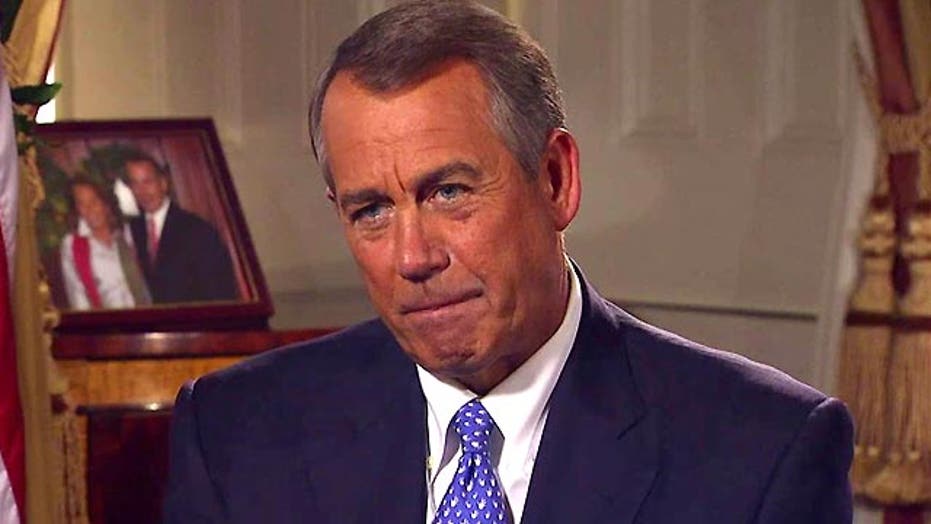 Boehner: Obama's policies are not working

WASHINGTON – House Speaker John Boehner confirmed to Fox News on Wednesday that Republicans plan to sue President Obama over his use of executive action on immigration.

“The president’s overreach when he took executive action to deal with the immigration problems in our country, frankly, in my view, is a violation of our Constitution,” Boehner said on “Special Report with Bret Baier.”

“We believe that the filing of a lawsuit to try to stop the president from - from violating our Constitution is an important step for our institution,” he added. “This isn’t about immigration. This is the president violating the Constitution, violating his oath of office, and frankly, not upholding the rule of law.”

The move to sue has been seen as an effort to appease conservatives who are upset they may be forced to accept a Department of Homeland Security funding bill that does not include provisions rolling back the president’s executive actions.

Earlier Wednesday, the White House shrugged off Boehner’s threats of a lawsuit.

“House Republicans seem to be relying more and more on the courts these days to challenge the president’s authority,” White House spokesman Eric Shultz said. “We believe that we acted within the full bounds of authority enshrined to the executive branch, and we’ll be defending that.”

Last year, the House moved to sue Obama over his administration’s delayed implementation of the employer mandate in ObamaCare.

In the wide-ranging interview with Baier, Boehner said he wasn’t surprised by the pushback he’s received from inviting Israeli Prime Minister Benjamin Netanyahu to address a joint meeting of Congress.

“The Israeli prime minister can also talk with some expertise about the growing threat of radical Islam,” Boehner said. “We’ve got a serious problem in the world and the president just wants to act like it’s going to just disappear. And so as a co-equal branch of our government, I don’t have any problem at all in doing what I did to invite the prime minister to come to Congress and address those concerns.”

Boehner also discussed hiccups he’s had with the Republican caucus.

When asked why the House would once again hold a vote to repeal ObamaCare, as is planned next week, Boehner said it came down to getting new Republican voices heard.

“We have 47 new members of Congress on the Republican side who have never had the chance to cast their vote to repeal ObamaCare,” Boehner said. “ObamaCare is hurting our economy. It’s hurting the job prospects for millions of Americans. And it’s hurting our whole health care delivery system while at the same time driving up costs for the average American.”

Boehner also said Republicans would offer an alternative to ObamaCare by the end of the congressional session.

“There are three committee chairmen that have the jurisdiction over the health care policy in our country and those three chairmen are working together to craft what we believe would be a better approach with regard to health care for the American people than ObamaCare.”