Barrett would 'radically and dramatically' change the balance of the court, Blumenthal says.

Sen. Richard Blumenthal issued a nonspecific warning of "consequences" if Republicans move ahead with the confirmation of Supreme Court nominee Amy Coney Barrett on Monday amid Democrats' talk of packing the Supreme Court or eliminating the Senate filibuster if President Trump's nominee is seated.

Blumenthal, D-Conn., was one of a parade of senators to hit the floor on Sunday night and Monday morning ahead of a likely confirmation vote on Barrett Monday evening. In remarks that ran over 40 minutes, Blumenthal touched on issues ranging from health care to abortion to a request he made for Barrett to recuse herself from any election-related cases, which Barrett declined.

But twice Blumenthal alluded to potential retaliation from Senate Democrats if Republicans succeed in seating the circuit court judge and Notre Dame law professor on the highest court in the land. 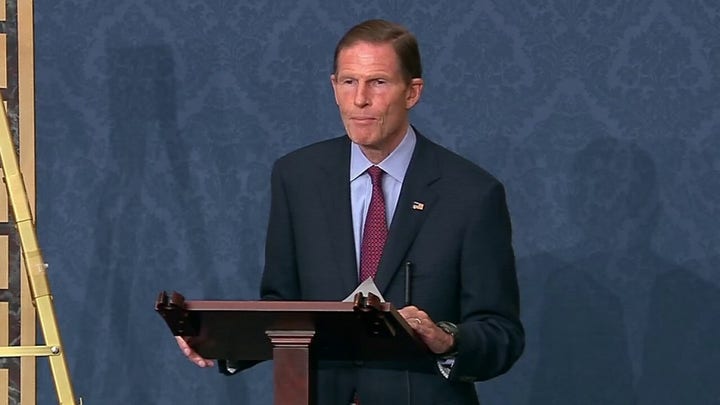 Blumenthal then warned that Barrett would "radically" shift the balance of the Supreme Court and went on to speculate about how she would rule on a variety of issues, with what he said could be dire results.

The Senate Judiciary Committee member returned to his warnings at the end of his speech.

"Nothing less than everything is at stake. A shift in the balance of the court that will last for decades if we do not correct it – and believe me, there are appropriate measures that should be considered," Blumenthal said.

Blumenthal did not specifically mention court-packing or getting rid of the legislative filibuster. But some Democrats have been threatening to do both of those things for months if they take the Senate and White House, even before the death of the late Justice Ruth Bader Ginsburg. And Republicans' effort to fill the Ginsburg vacancy has intensified those calls.

According to Josh Holmes, the former chief of staff to Senate Majority Leader Mitch McConnell, R-Ky., Democrats "shot the hostage before the standoff" by previously threatening to pack the Supreme Court. Indeed, no Republicans have been convinced by Democrats' court-packing threats to vote against Barrett.

Those comments have created a presidential campaign issue as Democratic nominee Joe Biden and his running mate Sen. Kamala Harris, D-Calif., have steadfastly refused to tell voters whether or not they will pack the Supreme Court.

Biden at a town hall this month said that he would decide whether he will pack the Supreme Court based on how Republicans handle the confirmation of Barrett.

He later added in an interview with Fox 2 Detroit: "I'm going to make clear my position in the next several days when they vote on this nominee, but I’ve got to keep the focus on that."