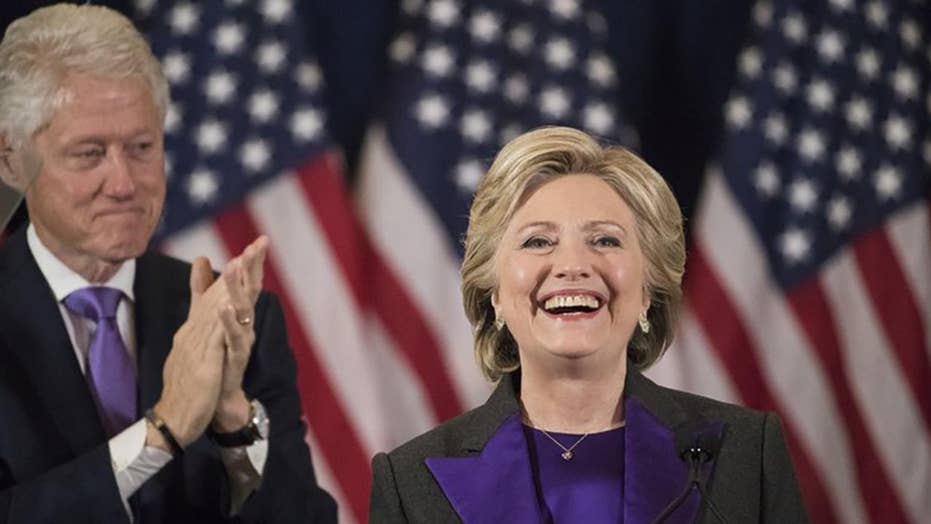 The Clintons will share stories, anecdotes that shaped their careers in public service on 13-city tour.

Bill and Hillary Clinton on Monday announced they will embark on an international 13-city speaking tour shortly after November's midterm elections, with tickets running as high as $745 and speculation swirling that the former secretary of state could announce yet another presidential bid.

The tour, which kicks off in Las Vegas, is set to run from November 2018 to May 2019. It will include several stops in the U.S. and Canada, and will cover the high-profile couple's thoughts on "one of the United States’ most controversial and unpredictable presidential elections," according to the event's organizer, Live Nation, which also handles speaking arrangements for former First Lady Michelle Obama and musicians like Taylor Swift and Jay-Z.

“Attendees will have the opportunity to hear one-of-a-kind conversations with the two leaders as they tell their stories from some of the most impactful moments in modern history," Live Nation said in a statement.

That focus is poised to rankle liberal commentators who have pushed for Clinton to stop focusing on her unexpected loss in the 2016 race, to allow for new candidates and issues to emerge. "Isn’t there someone who can convince this accomplished, inspiring, barrier-breaking superwoman to stop whining about 2016?" Michelle Cottle, a New York Times editorial writer, wrote in The Atlantic earlier this year. "Someone? Anyone?"

The Clintons, during public appearances and elsewhere, have also come under extensive fire from the #MeToo movement in recent weeks -- not only for past transgressions, but also for what critics have called their efforts to paper over them dismissively.

"Hillary Clinton is up to something."

In January, former Secretary of State Clinton drew condemnation from liberal advocates after she failed to apologize for choosing not to terminate a campaign staffer accused of sexual harassment. While Clinton wrote on Facebook that, in retrospect, she should not have made the decision to keep employing the staffer, faith adviser Burns Strider, she also explained in detail why she did.

"I didn’t think firing him was the best solution to the problem. He needed to be punished, change his behavior, and understand why his actions were wrong," Clinton said, noting that she had docked Strider's pay and ordered him to attend counseling while reassigning the woman he was accused of harassing.

"Taking away someone’s livelihood is perhaps the most serious thing an employer can do,” she continued. "When faced with a situation like this, if I think it’s possible to avoid termination while still doing right by everyone involved, I am inclined in that direction.”

That response, which Vox called "deeply unsatisfying" and The Washington Post panned as a "failure of oversight," highlighted a societal shift that would turn into a bigger problem for former President Clinton, whose once-masterfully nuanced responses to criticism largely became a liability in 2018.

In June, the former president sat for a disastrous interview with "The Today Show," in which he insisted that "I did the right thing" during the Monica Lewinsky scandal, when he denied, then admitted having an affair with a White House intern.

“Looking back on what happened then,” NBC News’ Craig Melvin asked Clinton in June, “through the lens of #MeToo now, do you think differently? Or feel more responsibility?”

In response to Lewinsky's claim that she was diagnosed with Post-Traumatic Stress Disorder (PTSD) because Clinton publicly accused her of lying about their affair, Clinton was angrily defensive, noting that “two-thirds of the American people sided with me" and that "this was litigated 20 years ago."

Even as he said the #MeToo movement was "way overdue" and that he "felt terrible" at the time, Clinton lashed out at Melvin and started wagging his finger at him.

"Nobody believes that I got out of that for free. I left the White House $16 million in debt," he seethed at Melvin. "But, you, typically, have ignored gaping facts -- and I bet you don't even know them." He then described various women he had hired into high-level government positions. "You are giving one side," Clinton said. He added that he did not feel he owed Lewinsky a personal apology because he had apologized publicly.

During his own book tour earlier this year, Clinton faced several hostile questions about his NBC interview, which he admitted "wasn't my finest hour." And in an interview on “The Late Show With Stephen Colbert," Clinton acknowledged he wanted a do-over of the interview.

Audience members might be able to ask similar questions of the Clintons this time around. Their events will “feature joint on stage conversations with the two leaders sharing stories and inspiring anecdotes that shaped their historic careers in public service, while also discussing issues of the day and looking towards the future,” according to Live Nation.

Attending the tour won't be cheap, although prices currently vary wildly depending on location. Tickets range from $75 to nearly $800, not including asking prices on the secondary market. The Clintons have reportedly made more than $150 million in speaking fees since 2001, a staggering figure that became something of a liability during her 2016 presidential run.

The upcoming tour will wrap up in May 2019 -- around the time that 2020 presidential contenders are expected to start announcing their plans to run for the White House.

This summer, Michael Goodwin wrote in The New York Post noted that Hillary Clinton had started sending a flurry of emails on behalf of her super PAC, seeking to raise money and hammering President Trump.

"Hillary Clinton is up to something," Goodwin wrote. "For now, I am convinced Clinton wants to go for it. Doubters should recall the line about pols who get the presidential itch: There are only two cures — election or death. Besides, the third time could be the charm."