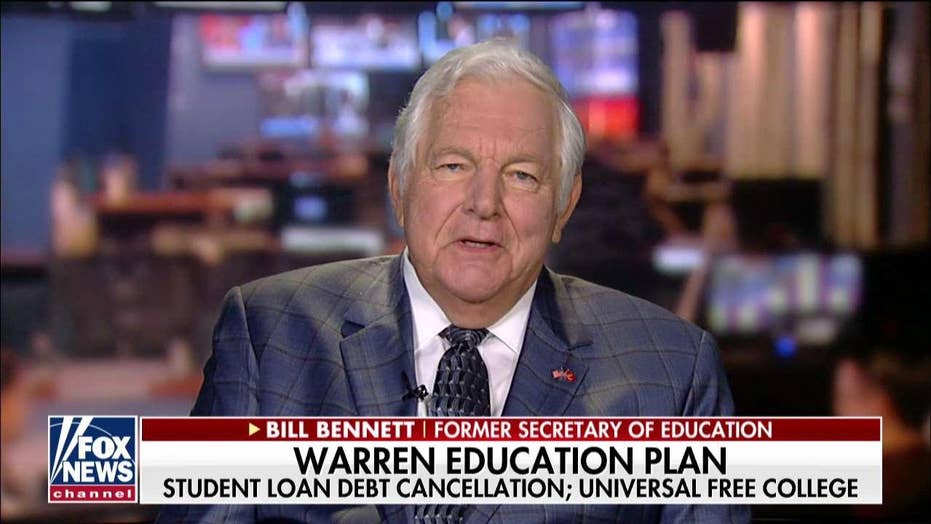 Bernie Sanders announced on Monday that he hopes to cancel the $1.6 trillion student loan debt in America and introduce a tax on stock bond and derivatives trades to make up the balance. Elizabeth Warren's legislative proposal also includes loan forgiveness, with the exception of borrowers with a household income of more than $250,000.

"I don't think it's good economics or good policy," Bennett, who served as Education Secretary under President Reagan, said on "America's Newsroom."

"The problem started in 2007, I'm sorry to say, during the Bush administration, when we shifted from private sector to the government," he said. "The government has largely created this mess. Now they are going to try to solve it? I don't think so," he continued.

FINANCIAL ADVISER: HERE'S WHAT PARENTS SHOULD DO AMID EXPLODING STUDENT LOAN DEBT CRISIS

He added that the plan is "regressive" and a "bad idea."

"My argument is, the more federal aid there is or federal spending, the higher tuitions will go," Bennett said. "Supposing we make college free for everyone, what do you think the first thing colleges will do is? Raise tuition yet again," he continued.

Sanders has proposed a tax plan on financial transactions which he predicts will raise more than $2 trillion over the next decade, Forbes reports. But Bennett hit back against the idea of college being "free" because of the tax.

"These are people who invest money in IRAs, people who save money, and employers," he said.  "It isn't free. It comes out of the consumer and citizen's hide."

Bennett dismissed the possibility that the plan, which Sanders introduced in an address Monday morning, would ever become law.

"President Trump should be able to shoot this one down pretty easily," he said.