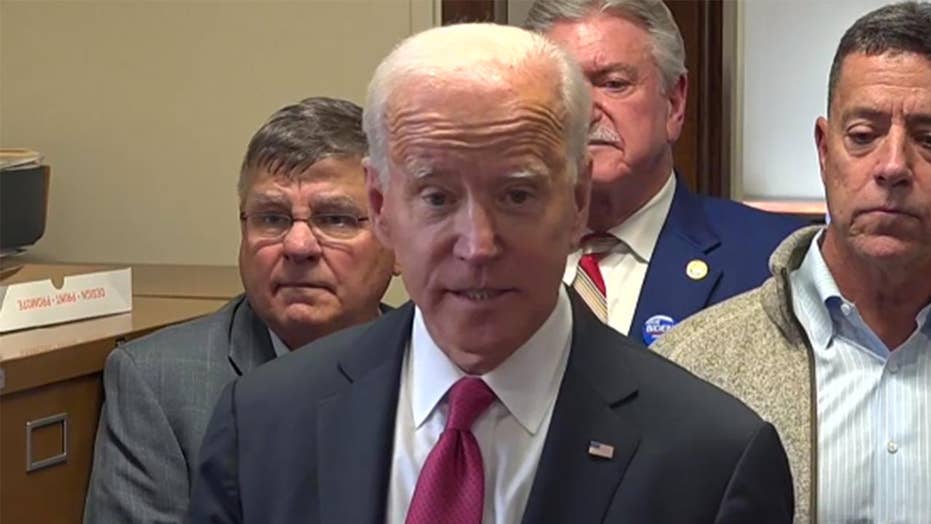 Biden on the ballot in New Hampshire, welcomes Bloomberg

CONCORD, N.H. – Joe Biden says he welcomes Michael Bloomberg into the race for the Democratic presidential nomination. And the former vice president dismissed suggestions that a likely candidacy by the billionaire business mogul and former New York City mayor is a reflection of his own performance as he runs for the White House.

Biden was in New Hampshire on Friday to file to place his name on the first-in-the-nation presidential primary ballot. His appearance came the morning after news that Bloomberg filed his paperwork on Friday – ahead of a deadline – to designate himself as a candidate in Alabama’s Democratic presidential primary.

Bloomberg -- a former independent who registered last year as a Democrat -- flirted with a presidential bid early this year but in March ruled out a run. His top advisers said on Thursday that he changed his mind because he worried the current crop of 2020 hopefuls were not “well-positioned” to beat President Trump next November.

“I welcome him in the race. Michael's a solid guy and let's see where it goes. I have no problem with him getting in the race,” the former vice president told reporters.

Biden shot down talk that Bloomberg is likely to launch a Democratic nomination bid because Biden’s own campaign is struggling. Some recent polls have suggested the frontrunner is losing ground to rivals like Sens. Elizabeth Warren and Bernie Sanders.

“In terms of he's running because of me, the last polls I looked at, I'm pretty far ahead,” he emphasized.

And Biden took a shot at reporters, saying, “I know you guys like this fiction about how things have closed down and everything's moving.”

Asked by Fox News if he’s talked with Bloomberg in recent days, the former vice president appeared to confirm the two have had a recent conversation, saying “I've spoken with Michael a lot.”

But he refused to elaborate, saying “it would be inappropriate of me to tell you about any conversations I had or didn't have with him about whether or not he was going to run.”

If Bloomberg launches a campaign, he could quickly spend millions on his own behalf. Biden – who’s long pushed for publicly funded elections and who’s struggled with his fundraising compared to some of his top 2020 rivals – didn’t directly answer when asked if he was concerned.

Instead, Biden praised Bloomberg’s contributions to the efforts to curb gun violence and to combat climate change.

Calling him an “honorable guy,” Biden said, “Michael Bloomberg has put a lot of money behind things that causes I care a lot about from dealing with keeping guns off the street and assault weapons, et cetera. He's done a lot for dealing with a whole range of issues.”

The conventional wisdom is Bloomberg – who like Biden is considered more moderate than others in the race - could take votes away from Biden. But longtime New Hampshire Sen. Lou D’Allesandro, a top Granite State Biden supporter, dismissed such concerns.

“Our guy is solid at this point in time,” the state senator stressed.

He said that Democrats in the state weren’t clamoring for another candidate to enter the race, noting they “are very satisfied with the current field of candidates.”

Biden -- accompanied by former four-term Democratic Gov. John Lynch -- passed through a cauldron of supporters packed into the halls of the historic New Hampshire Statehouse as he arrived to file. And after he filed, he headlined a rally with supporters.

While Biden remains at the fore in national polling, he’s slightly behind top-tier rivals Sanders of Vermont and Warren of Massachusetts in the latest New Hampshire survey. The two progressive standard-bearers hail from states seen as New Hampshire neighbors.

A couple of hours before Biden’s appearance, tech entrepreneur Andrew Yang filed to place his name on the primary ballot.

While complimenting Bloomberg, Yang predicted that “I do think that he’s going to have an uphill climb in the race, in part because of New Hampshire, where the people here in New Hampshire love to meet a candidate in person, take their temperature, look into their eyes, sometimes have them in their living room. I don’t think that’s going to be possible with Mike.”

And Yang – who’s campaigned extensively in the state over the past year and a half – emphasized that “there are some things money cannot buy and you can’t replace thousands of conversations in New Hampshire and in the early states with advertising. It’s just not possible. I welcome Mike into the race in the sense that he is a great American leader and has a lot to offer but I think he’s got his work cut out for him”

New Hampshire is the next major deadline Bloomberg faces. The deadline for candidates to file to place their name on the first-in-the nation presidential primary is next Friday, November 11.

Bloomberg aides told Fox News that there’s no word yet on whether the former New York City mayor will come to New Hampshire to file. But they added that they'll do "everything necessary to keep all of our options open.”