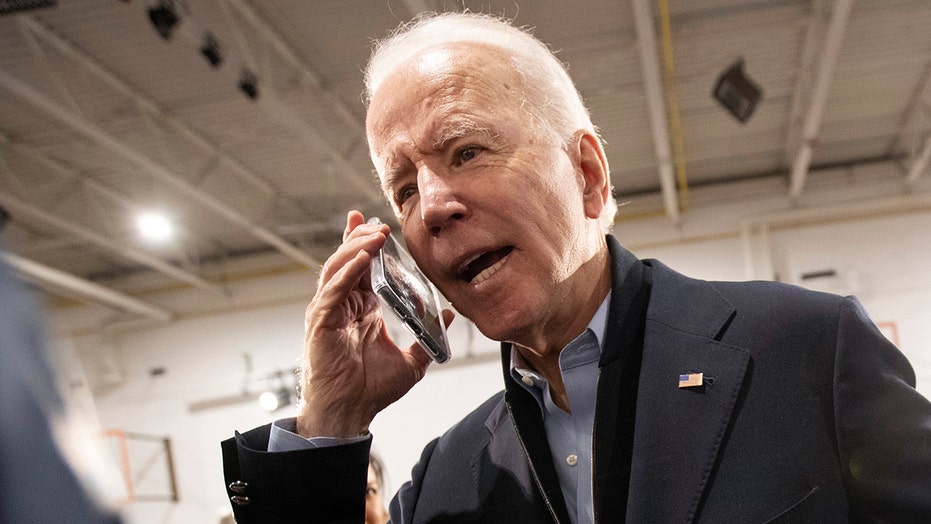 BIDEN SINKING, BLOOMBERG RISING
AP: “Joe Biden’s third presidential bid enters a critical stretch after a disappointing finish in the Iowa caucuses sent the former vice president on to New Hampshire with a skittish donor base, low cash reserves and the looming threat of billionaire rival Michael Bloomberg and his unlimited personal wealth. In New Hampshire on Tuesday, Biden insisted he had a ‘good night’ in Iowa even as he trailed [Pete Buttigieg and Bernie Sanders] … That leaves some establishment Democrats, including some Biden supporters, questioning his contention that he’ll reclaim clear front-runner status in the race against President Donald Trump once the primary fight moves beyond overwhelmingly white Iowa and New Hampshire to more racially diverse electorates. And it’s a reminder of how Biden’s previous presidential campaigns never advanced beyond Iowa. … Most precarious for Biden: Some of the would-be donors he could win over with a strong showing are giving new looks to Bloomberg…”

New Hampshire set for split decision - St. Anselm College: “Bernie Sanders and Joe Biden lead the field in a virtual tie with 19% support among first-in-the-nation primary voters. Sanders is up 10 points from the Saint Anselm College Survey Center’s November poll. Biden is up four points, but his support has remained consistent since he entered the race last April. After leading the November poll, Pete Buttigieg has dropped to 14%. He remains ahead of Elizabeth Warren and Amy Klobuchar, who round out the top of the field at 11% each. ‘Sanders’ rise is testament in part to the fact that hard campaigning in New Hampshire does persuade voters,’ said NHIOP Executive Director Neil Levesque. … Tom Steyer (5%), Andrew Yang (4%), and Tulsi Gabbard (3%) have some support in the Granite State, as does Mike Bloomberg (2%) who did not file for the New Hampshire primary. With a week to go until primary day, 11% of voters remain undecided.”

Iowa still flailing - Fox News: “Pete Buttigieg is narrowly leading the Democratic presidential field in the Iowa Caucuses, according to initial returns that the party at last began reporting late Tuesday afternoon following a massive delay linked to technical breakdowns. But Vermont Sen. Bernie Sanders is close behind the former South Bend, Ind., mayor, with 71 percent of precincts reporting in the first batches released by the embattled state party. Sanders is also ahead in the popular vote, with 24 percent to Buttigieg's 21 percent, Elizabeth Warren's 19 percent and Joe Biden's 15 percent. It was still not clear when the party would release the complete vote totals. The returns relevant to delegate count show Buttigieg with 26.9 percent and Sanders with 25.2 percent. Warren trailed with 18.4 percent and Biden was hovering in fourth with 15.4 percent, just ahead of Minnesota Sen. Amy Klobuchar.”

South Carolina GOPers try to prank Dems - The [Charleston, S.C.] Post and Courier: “A group of prominent Upstate Republicans is preparing to launch a wide-scale effort this week to encourage GOP voters across South Carolina to vote for U.S. Sen. Bernie Sanders in the Feb. 29 Democratic primary…”

THE RULEBOOK: ARMY STRONG
“Let a regular army, fully equal to the resources of the country, be formed; and let it be entirely at the devotion of the federal government; still it would not be going too far to say, that the State governments, with the people on their side, would be able to repel the danger.” – James Madison, Federalist No. 46

TIME OUT: ORANGE YOU A GOOD BOY
Smithsonian: “Tim Gottwald [a plant pathologist with the United States Department of Agriculture] will never forget … the signs he’d learned to associate with huanglongbing, or citrus greening—a devastating and wildly infectious bacterial infection that slashed the United States’ orange juice yields by more than 70 percent in the span of a decade. … Once they’ve begun to sport splotchy foliage and stunted fruit, trees can be diagnosed with a single glance. … Unfortunately, the converse isn’t true: Infected trees can appear normal for months, sometimes years, before visibly deteriorating, leaving researchers with few reliable ways to suss out sick citrus early on… [Gottwald and his colleagues have] taught dogs to recognize the telltale scent of a huanglongbing infection—an odor that eludes the attention of humans, but consistently tickles the super-sensitive schnozz of a mutt. Once trained up, canines can nose out the disease within weeks of infection, trouncing all other available detection methods in both timing and accuracy…”

TRUMP SET TO BEAT THE RAP IN SENATE TODAY
Roll Call: “A day after President Donald Trump presented what amounted to a summary of how he’ll campaign for reelection, the Senate will vote on whether he should continue his first term. The 4 p.m. vote, all but assured to acquit Trump, will close a formal, bitter four-month fight over whether Trump abused his office and tried to obstruct Congress in its investigation. Trump didn’t bring up the ‘I’ word in his address to Congress on Tuesday, but there were plenty of signs that it was the background against which he was speaking, from the House impeachment managers sitting together in a prime spot in the House chamber to Trump refusing to shake Speaker Nancy Pelosi’s hand after presenting her with a copy of the speech before he delivered it. Senators will have one more opportunity to explain their vote and offer their opinion on the president and investigation into his conduct.”

Jones a ‘yea’ - Fox News: “Alabama Democratic Sen. Doug Jones announced Wednesday morning that when the Senate convenes to decide a verdict in President Trump's impeachment trial, he will vote to convict. Jones, seen as a possible swing vote because he is running for reelection in a state that heavily supported Trump in 2016, issued a statement in which he referenced his oath of office and how he resolved to ‘keep an open mind’ during the trial before making a difficult decision. ‘After many sleepless nights, I have reluctantly concluded that the evidence is sufficient to convict the president for both abuse of power and obstruction of Congress,’ Jones said…”

Impeachment a fundraising goldmine - Politico: “Impeachment has become a gold mine — turning even some rank-and-file lawmakers into fundraising juggernauts as they took starring roles in prosecuting or defending President Donald Trump. A number of Democrats and Republicans who sit on the key committees investigating Trump saw their war chests flooded with cash — and their national profiles raised — during the months-long impeachment fight, which has consumed Washington and dominated headlines since September. And there is real evidence that impeachment played a role in the fundraising boom, at least for Republicans. Donation pages for WinRed — the GOP’s online fundraising tool — that included the word ‘impeach’ or ‘impeachment’ raised 300 percent more than pages that did not, according to a source familiar with the fundraising platform’s operations.”

State of the Union a partisan food fight - NYT: “For President Trump and Speaker Nancy Pelosi on Tuesday night, the State of the Union was hostile. The mutual snubbing began the moment Mr. Trump walked into the House chamber and continued until he finished speaking, when Ms. Pelosi stood, an expression of vague disgust on her face, and tore up her printed copy of his speech — in full view of the television cameras, while Mr. Trump had his back turned. The interaction between Mr. Trump and Ms. Pelosi, who had led the drive to impeach him, was one of the most anticipated moments of the president’s appearance at the Capitol the night before the Senate is expected to acquit him in his impeachment trial. The two had not seen each other since October, when Ms. Pelosi abruptly left a White House meeting after lecturing a scowling Mr. Trump.”

AUDIBLE: CHOCOLATE RAIN
“I was fixing to put it in the plastic recycling one day at home, and I thought, shoot, I can put water in that.” – Tennessee state Rep. Kent Calfee explaining to the Tennessean why he was drinking from a chocolate syrup bottle while waiting for Gov. Bill Lee's second State of the State address to begin Monday night.

NEVER TOO LATE FOR LOVE
WIVB: “Watching Ray Kinz and his 6-year-old dog Bonita together, it’s easy to see they are inseparable. With such a close bond they’ve formed, it’s hard to believe the two just met this past December. The Pitbull Terrior mix was passed over at the Niagara [Niagara, N.Y.] SPCA for nearly 500 days. … ‘When I went in I just asked them which one’s been there the longest and which is the oldest,’ said Kinz. ‘And that’s where Bonita came from,’ he laughed. ‘The two of them just fell in love,’ said Niagara SPCA event coordinator, Kim LaRussa. Just a day later, Kinz made the adoption official and it was quite the celebration. … ‘[W]hen we got in everyone was waiting to see her off. They had confetti, balloons and treats,’ he said. ‘It was a pretty big deal.’ The video of Bonita excitedly leaving the shelter, as staff cheered her on went viral.”

AND NOW, A WORD FROM CHARLES…
“A war of necessity is a life-or-death struggle in which the safety and security of the homeland are at stake. The war on terrorism is such a war. So was World War II.” – Charles Krauthammer (1950-2018) writing in Time magazine on Nov. 5, 2001.