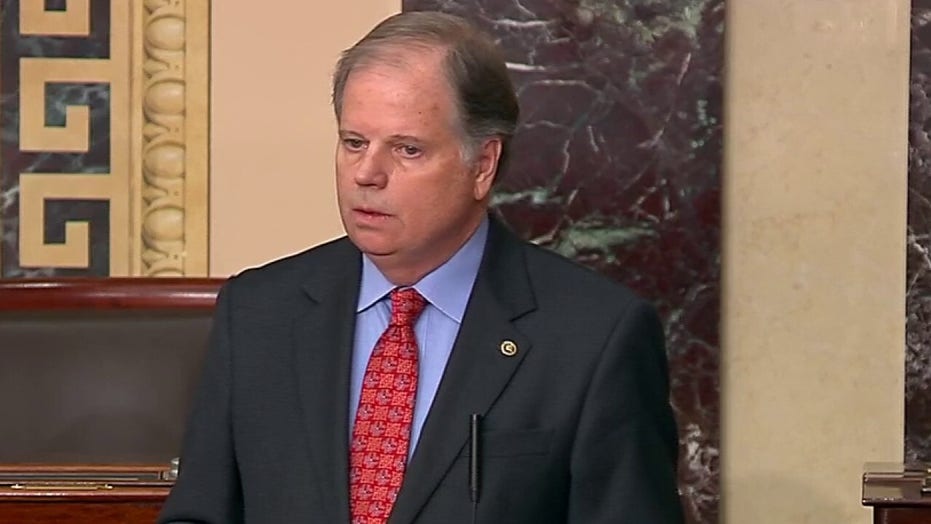 Sen. Doug Jones says he will vote to convict President Trump on both articles of impeachment

I did not run for the Senate hoping to participate in the impeachment trial of a duly elected president, says Alabama Democratic Senator Doug Jones.

Alabama Democratic Sen. Doug Jones announced Wednesday morning that when the Senate convenes to decide a verdict in President Trump's impeachment trial, he will vote to convict.

Jones, seen as a possible swing vote because he is running for reelection in a state that heavily supported Trump in 2016, issued a statement in which he referenced his oath of office and how he resolved to "keep an open mind" during the trial before making a difficult decision.

"After many sleepless nights, I have reluctantly concluded that the evidence is sufficient to convict the president for both abuse of power and obstruction of Congress," Jones said, adding that he "read thousands of pages of transcripts, watched videos of testimony, [took] copious notes, reviewed history and precedents and discussed this case with colleagues, staff, and constituents."

Ultimately, Jones concluded that Trump's dealings with Ukraine "placed his personal interests above the national interests," and jeopardized national security. Jones said he believes that by delaying military aid to Ukraine and seeking an announcement that a foreign country was investigating his political rivals, Trump did more than simply act inappropriately, as some Republicans have said, but abused his power.

Jones did offer some criticism of House Democrats in discussing the charge of obstruction of Congress. While he concluded that Trump is guilty due to a refusal to cooperate in the House's impeachment inquiry, he did recognize that the tactics of House Democrats made this a difficult question. Instead of challenging Trump's assertion of executive privilege in the court system, they either rescinded or opted not to issue subpoenas, then claimed that Trump's use of privilege was evidence of obstruction.

"The second article of impeachment, obstruction of Congress, gave me even more pause," Jones said. I have struggled to understand the House’s strategy in their pursuit of documents and witnesses and wished they had done more.

Despite the criticism of the House's inquiry, Jones said that he believed Trump was guilty anyway.

"The president’s actions demonstrate a belief that he is above the law, that Congress has no power whatsoever in questioning or examining his actions, and that all who do so, do so at their peril," he said. "That belief, unprecedented in the history of this country, simply must not be permitted to stand."

Jones explained his decision further in remarks on the Senate floor Wednesday morning.

"Throughout the trial, one piece of evidence continued to stand out for me," he said. "It was the president's statement that under the Constitution we have Article II and I can do anything I want. That seems to capture this president's belief about the presidency."

Jones is one of several swing votes whose decisions were eagerly awaited. Fellow Democrat Joe Manchin, D-W.V., indicated Monday that he was still undecided, but suggested that a formal censure would be a proper measure instead of removal from office. Sens. Lisa Murkowski, R-Alaska, and Susan Collins, R-Maine, said they will vote in Trump's favor. Sen. Mitt Romney, R-Utah, is expected to address the Senate Wednesday afternoon.