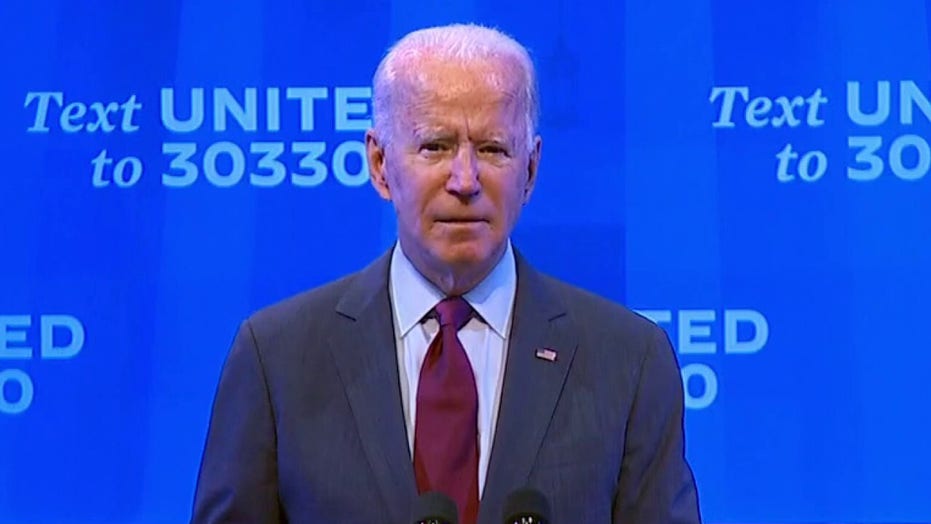 In remarks delivered Sunday morning, Biden claimed that the right thing to do would be to wait to fill the vacant seat on the court until after January's inauguration.

"The Senate has to stand strong for our democracy," Biden said in remarks Sunday afternoon. He went on to say that senators should "take a step back from the brink," and that "this is a time to de-escalate."

Biden went on to claim that "the very soul of our country is at stake" in November's election, as issues such as abortion, immigration and the environment hang in the balance. He said that is why people are going to the polls this year.

"Their voices may not matter to Donald Trump. They may not matter to [Sen.] Mitch McConnell," Biden said. "But there are Senate Republicans out there who know in their hearts that if they shut out the voices of those during a voting period, during an election, they’re closing the door on American democracy thereafter."

President Trump told "Fox & Friends" co-host Pete Hegseth in an interview that aired Sunday morning that he thinks Barrett could be confirmed ahead of the Nov. 3 election, saying there's a "tremendous amount of time." The confirmation process is currently scheduled to kick off Oct. 12.

"I think we could have it done easily before the election," he told Hegseth during an exclusive one-on-one interview following the nomination, which aired Sunday morning, adding that they were "going to try and have it done quickly."

Biden's criticism focused in large part on concerns that -- if confirmed -- Barrett would vote to eliminate the Affordable Care Act (ACA), as the Supreme Court is readying to hear arguments in a case involving the law known as ObamaCare one week after November's election.

"It doesn’t matter what the American people want," Biden said Sunday. "President Trump sees his chance to fulfill his explicit mission: steal away the vital protections of the ACA from countless families that have come to rely on them for their health, their financial security and the lives of those they love.”

Biden referenced Barrett's past remarks made before she was a judge in which she criticized Chief Justice John Roberts' decision that upheld ObamaCare by classifying the penalty attached to the individual mandate as a tax, and thus falling under Congress' authority.

The penalty dropped to zero during Trump's administration, leading Republicans to claim that because there is no longer a tax attached to the mandate, it is now unconstitutional. If Barrett is confirmed before the election, it is possible that she may be involved in the ruling on the matter.

This has been a common theme of Democrats' attacks on Barrett. Earlier Sunday, Sen. Debbie Stabenow, D-Mich., told "Fox News Sunday" that President Trump's goal has been to do away with the Affordable Care Act, and claimed that he would only nominate someone who would rule the way he wanted on the matter.

“The No. 1 priority of the president of the United States, Donald Trump, has been to take away people’s health care," Dabenow said, adding that Trump "certainly has given every indication that he wants the Supreme Court to act in favor of the case that he has supported."

On the same program, Labor Secretary Eugene Scalia said that attacks on Barrett based on ObamaCare were a "red herring" and that "it reflects a bit of frustration on the part of the Democrats on how they might attack her nomination."