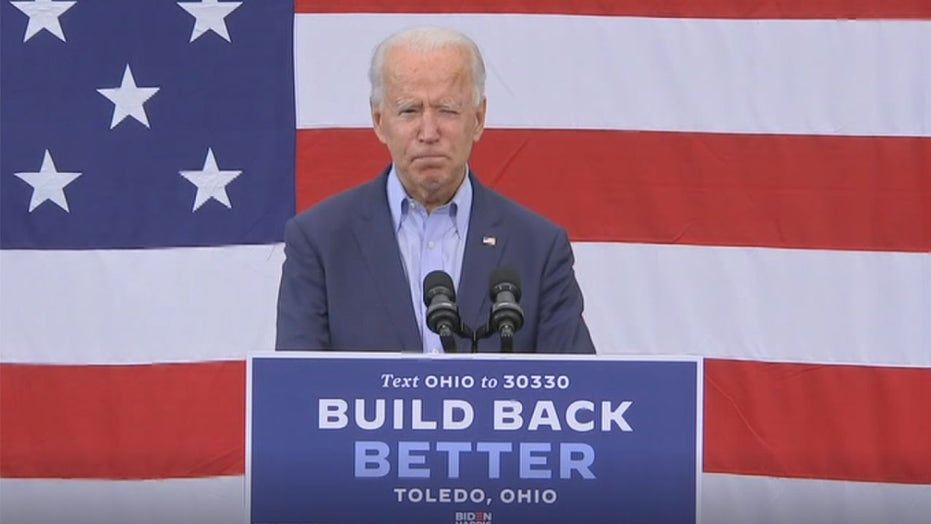 Biden: The longer that Trump is president, the worse he seems to get

Joe Biden raised eyebrows yet again on Monday for remarks he made on the campaign trail.

While briefly taking questions from reporters en route to a campaign event in Ohio, Biden was asked if Judge Amy Coney Barrett's faith should be "considered" during her confirmation to the Supreme Court, something the Democratic nominee flatly rejected.

However, as part of his explanation, he recalled a time when he "got in trouble" regarding the questioning of someone's faith.

"You may remember, I got in trouble when we were running against the senator who was a Mormon, the governor, OK? And I took him on," Biden said. "No one's faith should be questioned."

That governor was then-former Massachusetts Gov. Mitt Romney, the Republican nominee for president against Barack Obama in the 2012 election. Romney was elected Utah senator in 2018.

Later on, while closing his stump speech at a campaign drive-in event in Toledo, Biden touted America's ability to come out of a national crisis "stronger" than it was coming in.

"Sleepy Joe Biden had a particularly bad day today. He couldn’t remember the name of Mitt Romney, said again he was running for the U.S. Senate, and forgot what State he was in. If I did any of this, it would be disqualifying. With him, he’s just Sleepy Joe!" Trump exclaimed.

This isn't the first time Biden accidentally told supporters that he was running for the Senate. Back in February, at a Democratic event in South Carolina, he misspoke about which office he was seeking.

"You're the ones who sent Barack Obama the presidency. And I have a simple proposition here: I'm here to ask you for your help," Biden pleaded to Democratic voters. "Where I come from, you don't go very far unless you ask. My name's Joe Biden. I'm a Democratic candidate for the United State's Senate. Look me over. If you like what you see, help out. If not, vote for the other Biden. Give me a look though, OK?"

Biden ended up winning the South Carolina primary, which helped catapult him to clinching the Democratic nomination.

Last week, the former VP was slammed for a viral clip of him suggesting why people were able to quarantine during the coronavirus pandemic.

The 10-second clip, which was originally shared on Sept. 29, was just a snippet of comments the Democratic nominee made during a Sept. 15 roundtable with veterans in Tampa, Fla.