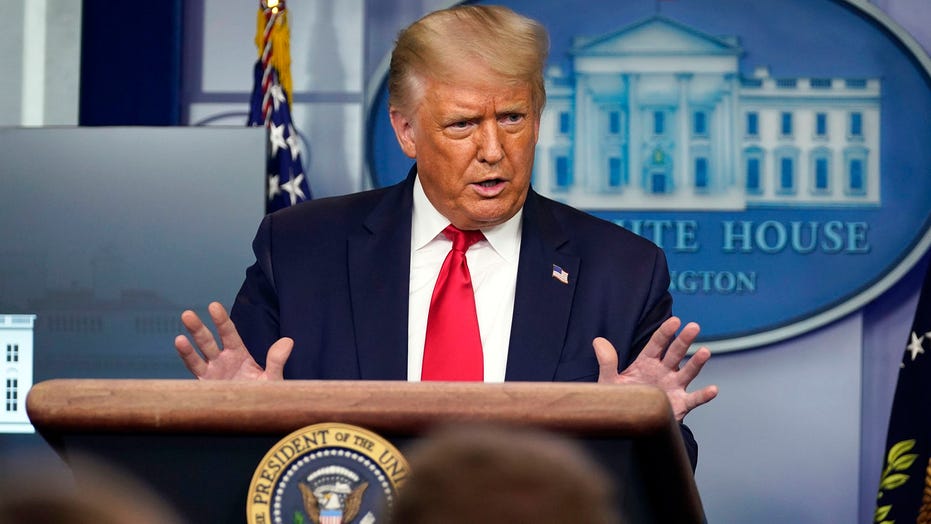 "Voting by mail is safe and secure," Biden tweeted. "And don't take my word for it: Take it from the President, who just requested his mail-in ballot for the Florida primary on Tuesday."

Records from the Palm Beach County Supervisor of Elections website show that a request for the president and first lady Melania Trump came Wednesday.

USA Today reported Thursday that the ballots would have to travel to Washington, D.C., where the couple could vote and then return before 7 p.m. ET Tuesday, when all mail-in ballots must be submitted.

According to the Sun-Sentinel, the number of people voting by mail two weeks before the vote has already exceeded the number of mail-in ballots cast in August 2016 and 2018.

Biden's jab comes on the heels of weeks of harsh criticism from the president regarding the use of mail-in ballots, telling the American people that mail-in voting would boost bad actors attempting election fraud in the upcoming November election.

On Thursday, the president told Fox Business' Maria Bartiromo that part of the reason negotiations over a fourth economic relief package remain delayed is a Democratic-led push for funding for expanded mail-in ballots amid the pandemic.

"It's their fault," Trump said. "They want $3.5 billion for something that's fraudulent ... for the mail-in votes, universal mail-in ballots. They want $25 billion for the post office. They need that money so it can work and they can take these millions and millions of ballots."

The president went on to slam the practice, claiming that ballots have been “sent to dogs” and "dead people."

Echoing National Institute of Allergy and Infectious Diseases Director Dr. Anthony Fauci, the president went on to say that “there is nothing wrong with getting out and voting” amid the coronavirus pandemic.

“I think if carefully done, according to the guidelines, there’s no reason that I can see why that not be the case,” Fauci told ABC News this week. “If you go and wear a mask, if you observe the physical distancing, and don’t have a crowded situation, there's no reason why you shouldn't be able to do that.”

Trump singled out Florida as an exception.

Last week, he tweeted that his supporters should request an absentee ballot and vote by mail there because the election system in the Republican-run battleground state is "Safe and Secure, Tried and True."

Democrats have pushed back at the president's "baseless" charges, and argue that Trump and the Republican Party are trying to suppress the vote.

Election experts do say that voting by mail is more susceptible to fraud than casting a ballot in person, but they've seen no evidence of widespread fraud or that absentee balloting favors Democrats.

With states and localities increasingly implementing COVID-19-related regulation changes at polling locations, more Americans are expected to send in their ballots by mail this year than in any election in the nation’s history.