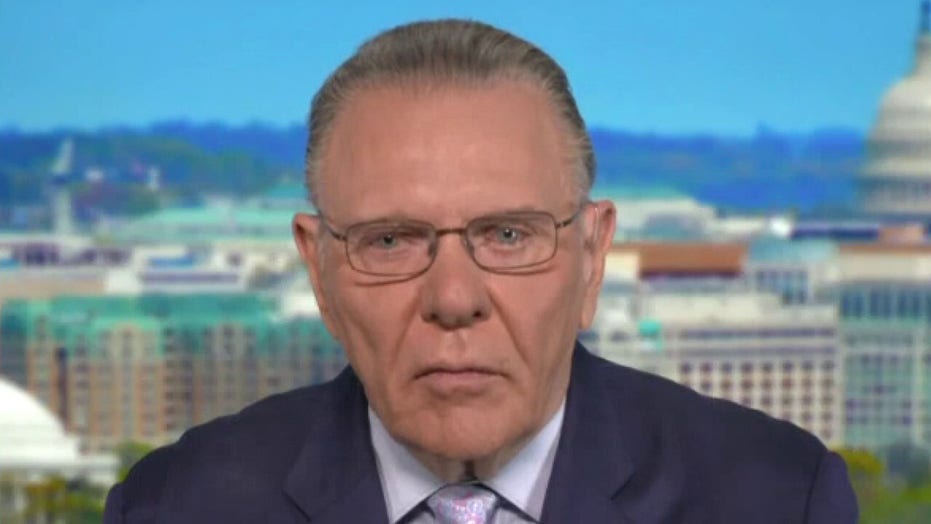 Gen. Jack Keane: ‘We failed to complete the mission, it’s that simple’

President Joe Biden addressed the nation Tuesday afternoon for the first time since American troops fully withdrew from Afghanistan and pinned partial blame on former President Donald Trump for some of the chaos that unfolded during the withdrawal.

"The previous administration’s agreement said that if we stuck to the May 1st deadline that they had signed on to leave by, the Taliban wouldn’t attack any American forces," the president said during his Tuesday speech shifting blame to negotiations Trump had with the Taliban before he took office. "But if we stayed all bets were off, so we were left with a simple decision. Either follow through on the commitment made by the last administration and leave Afghanistan or say we weren’t leaving and commit another tens of thousands more troops going back to war. That was the choice. The real choice between leaving or escalating."

Biden said that the Taliban was in its "strongest military position since 2001" when he took office.

The president also added that August 31 was not an "arbitrary deadline" to withdrawal American troops but instead it was designed to "save lives."

Biden did say during his speech that he takes "responsibility" for the decision to leave Afghanistan and the issues that resulted from that choice.

"I take responsibility for the decision," Biden said. "Now some say we should have started mass evacuations sooner and couldn't this have been done in a more orderly manner? I respectfully disagree."

As the speech unfolded, the phrase "Blaming Trump" began trending on Twitter, with many prominent conservative voices expressing disapproval with Biden’s attempt to shift the focus to Trump.

"Oh, now he’s blaming Trump of course. Biden says Taliban was in its strongest position ever when he came into office in Jan, controlling more than half the country," Fox News contributor Tammy Bruce tweeted. "Then how is it that he insisted just a few weeks ago that the Taliban were not going to take over the country?"

"The Taliban onslaught started coming once Joe Biden got into the White House," Trump’s former Acting Director of National Intelligence Richard Grenell tweeted during the speech. "The Taliban knew they couldn’t make the move when Trump was in office."

"How many times did he blame Trump?" Rep. Ronny Jackson, who served as Trump’s White House doctor, tweeted during the speech. "Mr. Biden, YOU ARE THE COMMANDER IN CHIEF! STOP blaming Trump for your FAILURES! You’re a FAILED President and you need to RESIGN!"

Biden has repeatedly cited his predecessor in multiple statements and speeches, and Trump has issued a flurry of statements the past couple of days, going as far as arguing that it’s time for the president "to resign in disgrace."

Biden officials have attempted to make the argument that the administration was handcuffed by an agreement with the Taliban signed by President Trump in Doha, Qatar in February 2020, which included a U.S. pledge to remove troops from Afghanistan.

"I bear responsibility for, fundamentally, all that's happened of late," Biden said last week. "But, you know as well as I do that the former president made a deal with the Taliban to get all American forces out of Afghanistan by May 1."

But Biden can go only so far in claiming that agreement boxed him in. It had an escape clause: The U.S. could have withdrawn from the accord if Afghan peace talks failed. They did fail, but Biden chose to stay in the agreement, although he delayed the complete pullout from May to September.

Chris Miller, acting defense secretary in the final months of the Trump administration, chafed at the idea that Biden was handcuffed by the agreement.

"If he thought the deal was bad, he could have renegotiated. He had plenty of opportunity to do that if he so desired," Miller, a top Pentagon counterterrorism official at the time the Doha deal was signed, told The Associated Press in an interview.

Renegotiating, though, would have been difficult. Biden would have had little leverage. He, like Trump, wanted U.S. troops out of Afghanistan. Pulling out of the agreement might have forced him to send thousands more back in.

U.S. officials made clear at the time that the agreement was conditions-based and the failure of intra-Afghan peace talks to reach a negotiated settlement would have nullified the requirement to withdraw.

One day before the Doha deal, a top aide to chief U.S. negotiator Zalmay Khalilzad said the agreement was not irreversible, and "there is no obligation for the United States to withdraw troops if the Afghan parties are unable to reach agreement or if the Taliban show bad faith" during negotiations.

Biden has publicly stated that he would have removed all troops from Afghanistan even if Trump had not made the Doha arrangement.

Trump addressed critics of his plan in a radio interview with Hugh Hewitt last week and said that a Taliban attack on U.S. troops in March would have caused him to end the agreement and strike the Taliban.

"We would not have stood for any soldiers or any Americans being killed or shot at or hurt in any way," Trump said. "That was in there. And Hugh, for 18 months, not one American soldier was killed. Not one. Eighteen months. And that was because of the agreement."

Trump added, "It was conditions-based. Now there were many other parts of the agreement also. And if they violated them, you know that, we went in and bombed the hell out of them, and they never would. They never would have come into Kabul."