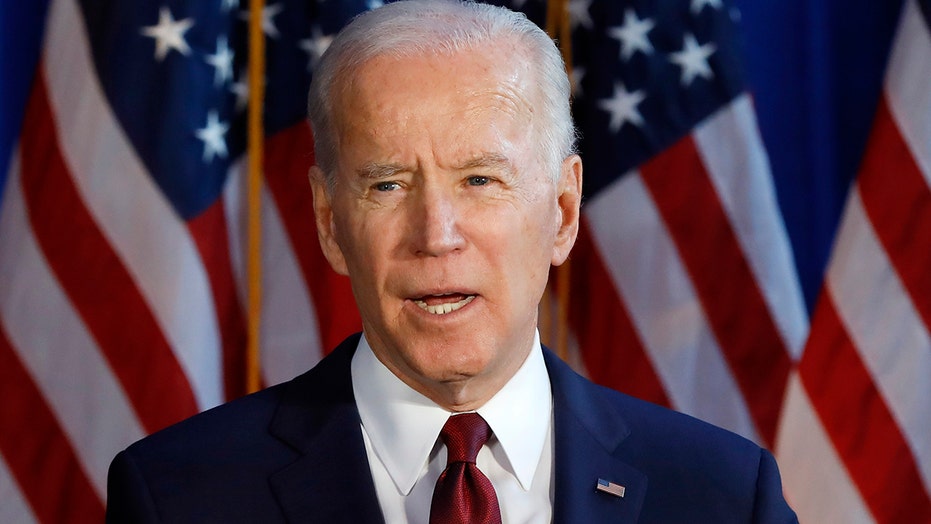 Presumptive Democratic presidential nominee Joe Biden, sequestered in his Delaware home with in-person campaign operations halted because of the coronavirus, attempted to hold a campaign rally for voters in Tampa Bay, Fla., on Thursday night, but the glitch-riddled event instead drew mockery from Republicans and the media.

Shaky audio and video plagued the nearly hourlong event as Florida politicians, among them Rep. Charlie Crist and Rep. Kathy Castor, tried to bring the former vice president's message to voters through the numerous technological issues. Then, nearly 40 minutes into the rally, it was Biden's turn to speak.

"They introduced me? Am I on?" Biden asked someone off-screen as he approached the camera, taking off a pair of dark aviator sunglasses.

BIDEN CAMPAIGNS IN FLORIDA – FROM HIS HOME IN DELAWARE

"Good evening, thanks so much for tuning in. I wish we could have done this together and it [had] gone a little more smoothly but I'm grateful we're able to connect virtually and thank you..." Biden continued before his audio feed became unintelligible mid-sentence.

The audio and video problems continued through Biden's speech, with the former vice president's lips moving out of sync with the sound and a significant amount of his talk impossible to understand through the tech problems.

"The candidate's own audio was going in and out all glitchy," Evan Axelbank of Fox13 tweeted. "How can a national campaign allow this to happen? Do they not have Zoom?"

A story on Vice described the rally as "[s]o plagued by technological problems it looked like it was being run by local seniors attempting Zoom for the first time."

The event was part of a push by Biden to resume at least some campaign trail-style events, as the candidate has held 25 fundraisers since March 3 and three press conferences, but has been unable to visit voters in their towns and cities across the country. That in-person connection is a strength of Biden's, who brands himself as an old-fashioned retail politician. His Thursday events – a roundtable with African-American leaders in Jacksonville and then the Tampa Bay rally – appear to be Biden’s first since becoming the all-but-certain nominee and moving to a general election battle against President Trump to specifically target a key battleground state.

The Jacksonville roundtable did not have the kind of tech problems that plagued the Tampa Bay event.

Despite the candidate's own acknowledgment of the technical issues at the top of his speech Thursday, Biden and his campaign did not appear to publicly comment on glitches.

The virtual events in Florida come just a couple of days after two of the political masterminds behind former President Barack Obama’s historic 2008 presidential election victory urged Biden to beef up his digital game and be more aggressive in taking the fight to Trump amid the unique 2020 political circumstances transformed by the coronavirus pandemic.

David Axelrod – who was the senior strategist for Obama’s 2008 campaign and 2012 reelection – and Obama's 2008 campaign manager David Plouffe, in an opinion piece in The New York Times, urged the candidate to break out of the “Biden in the basement” setting from his TV studio in the basement of his Delaware home.