President Biden, in his first address to a joint session of Congress Wednesday night, laid out his vision for America, through a slew of policy proposals and a legislative wish list, while vowing to work with both Republicans and Democrats to deliver on his agenda.

Biden delivered his address, which lasted just over an hour, from the House chamber Wednesday night, outlining proposals from continuing to address the coronavirus pandemic, to his jobs package, to universal preschool, healthcare, immigration reform, gun control, foreign policy and more.

"My fellow Americans, while the setting tonight is familiar, this gathering is just a little bit different. A reminder of the extraordinary times we’re in," Biden said upon taking the podium.

Typically, there are approximately 1,600 people at a presidential address of this kind, but due to social distancing requirements amid the coronavirus pandemic, only approximately 200 guests were in attendance, including 80 House members and 60 senators.

"Throughout our history, presidents have come to this chamber to speak to Congress, to the nation and to the world, to declare war, to celebrate peace, to announce new plans, and possibilities," Biden said. "Tonight, I come to talk about crisis and opportunity-- about rebuilding the nation, revitalizing our democracy, and winning the future for America."

BIDEN'S ADDRESS TO CONGRESS: EVERYTHING TO KNOW

"As I stand here tonight, we are just one day shy of the 100th day of my administration. 100 days since I took the oath of office—lifted my hand off our family Bible—and inherited a nation—we all did—that was in crisis," Biden said, pointing to the coronavirus pandemic, the economic downfall brought on by the pandemic, and the assault on the Capitol on Jan. 6, which he described as "the worst attack on our democracy since the Civil War."

"Now—after just 100 days—I can report to the nation: America is on the move again. Turning peril into possibility. Crisis into opportunity. Setback into strength," he said.

Biden, touting his first 100 days in office, said his administration has "acted to restore the people’s faith in our democracy to deliver."

The president applauded Congress for passing the American Rescue Plan, which he called one of the "most consequential" plans in "history," saying the $1,400 stimulus checks are "making a difference" for families across the country.

"We’re already seeing the results," Biden said, noting that the U.S. is on record to cut child poverty in the country "in half this year" thanks to the package, and said the economy "created more than 1.3 million new jobs in 100 days."

"More jobs in the first 100 days than any president on record," Biden said. 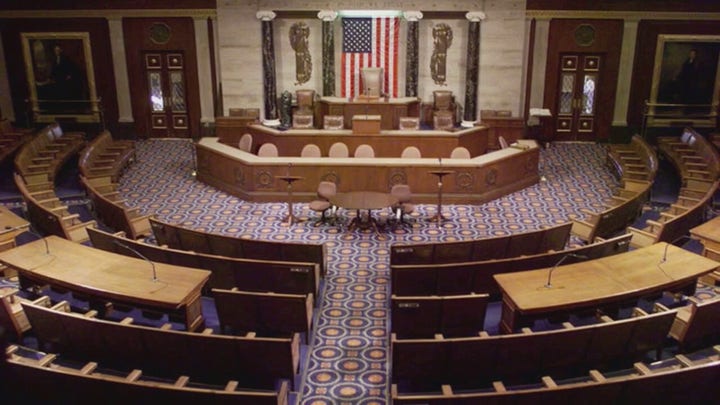 "We will have provided over 220 million COVID shots in 100 days—thanks to the help of all of you," Biden said, noting that the administration is "marshaling every federal resource" to get vaccines to more than 40,000 pharmacies, to setting up community vaccination sites.

Biden, from the podium, urged all Americans over the age of 16 to get vaccinated "right now, right away."

"Go get vaccinated, America. Go and get the vaccination," Biden said, noting that the "progress" related to the coronavirus pandemic in the first 100 days of his administration "has been one of the greatest logistical achievements this country’s ever seen."

The president went on to detail his $1.9 trillion American Jobs Plan—his proposal to rebuild the nation’s infrastructure and pump money into manufacturing, transportation, renewable energy and combating climate change—saying it "will add millions of jobs and trillions of dollars in economic growth for years to come."

Biden said the plan is the "largest jobs plan since World War II," and discussed bringing manufacturing jobs back to the United States from Beijing, while saying there is "no reason" American workers cannot lead the world in manufacturing electric vehicles and batteries.

"American tax dollars are going to be used to buy American products, made in America, to create American jobs. That’s the way it’s supposed to be and it will be in this administration," Biden said.

"I know some of you at home wonder whether these jobs are for you. So many of you feel left behind and forgotten in an economy that’s rapidly changing. It’s frightening. I want to speak directly to you," Biden said. "These are good-paying jobs that can’t be outsourced."

The president said that "nearly 90% of the infrastructure jobs" created under the plan "do not require a college degree," and added that "75% don’t require an associate’s degree."

Meanwhile, Biden formally introduced the American Families Plan, which calls for universal "high-quality preschool" for all children between the ages of 3 and 4.

The plan would provide two years of free community college to be made available to all Americans, in addition to offering new funding for historically Black colleges and other minority-serving institutions. The plan would also bring a renewed focus on teacher training in the United States, as well as expanded child tax credits and a national paid leave program.

Senior administration officials told Fox News Wednesday that the American Families Plan is expected to cost $1.8 trillion, with the universal pre-school program alone set to cost approximately $200 billion, and the free community college provision costing taxpayers about $109 billion. Under the plan, Dreamers would also qualify for free education at community colleges and would have access to Pell Grants, which would, in turn, be increased by $1,400.

As for paying for his proposals, the president again vowed he could do so "without increasing the deficit," while promising not to "impose any tax tax increase on people making less than $400,000 per year," while pointing to "corporate America" to pay their "fair share."

Biden went on to slam former President Trump’s 2017 tax cuts, saying it added "$2 trillion to the deficit" and was beneficial to "the top."

Biden proposed to bring the top tax bracket for the wealthiest 1% of Americans "back up to where it was when George W. Bush was president—39.6%."

"We’re going to get rid of the loopholes that allow Americans who make more than $1 million a year pay a lower rate on their capital gains than working Americans pay on their work," Biden said. "This will only affect three tenths of 1% of all Americans by that action. And the IRS will crack down on millionaires and billionaires who cheat on their taxes—That’s estimated to be billions of dollars."

He added: "I’m not out to punish anyone, but I will not add to the tax burden of the middle class of this country. They’re already paying enough."

Biden called his proposal "fair" and "fiscally responsible," while saying it will "raise the revenue to pay for the plans I’ve proposed that will create millions of jobs that will grow the economy."

Separately, the president said he would work with Congress this year on health care and the Affordable Care Act—specifically lowering the prices of prescription drugs.

"It won’t just help people on Medicare. It would lower prescription drug costs for everyone," Biden said, adding that the money saved would go to strengthening the Affordable Care Act and expanding medicare coverage benefits "without costing taxpayers an additional penny."

"It’s within our power to do it, let’s do it now," Biden said. "We’ve talked about it long enough, Democrats and Republicans. Let’s get it done this year."

He added: "Health care should be a right not a privilege in America."

Biden also proposed the creation of a new agency within the National Institute of Health dedicated to advanced research projects for health.

"Here’s what it would do—it would have singular purpose to develop breakthroughs to prevent detect and treat diseases like Alzheimers, Diabetes and Cancer," Biden, who lost his eldest son, Beau, to brain cancer, said. "So many of us have deceased sons, daughters, relatives who died of cancer."

Biden, during his time as vice president, led President Obama's "Cancer Moonshot" initiative launched in 2016 to double the rate of progress and advances in cancer prevention, diagnosis and treatment.

As for foreign policy, the president said that he is advancing one that "benefits the middle class," and is "making sure every nation plays by the same rules in the global economy, including China."

"In my discussion with President Xi, I told him that we welcome the competition – and that we are not looking for conflict," Biden said. "But I made absolutely clear that I will defend America's interests across the board."

"America will stand up to unfair trade practices that undercut American workers and American industries, like subsidies for state-owned enterprises and the theft of American technologies and intellectual property," Biden added, noting that the U.S. "will maintain a strong military presence in the Indo—Pacific just as we do with NATO in Europe – not to start conflict – but to prevent one."

As for Russia, Biden said he is not looking for "escalation," but will respond to Moscow "proportionately."

Meanwhile, Biden also called on Congress to act on police reform, and "root out systemic racism."

"My fellow Americans, we have to come together to rebuild trust between law enforcement and the people they serve, to root out systemic racism in our criminal justice system," Biden said. "We need to work together to find a consensus."

He added: "Let’s get it done next month, by the first anniversary of George Floyd’s death."

Biden also called on Congress to pass the equality act to protect LGBTQ Americans, and the Violence Against Women Act, voting legislation, like H.R. 1, and gun control legislation that would ban assault weapons and high—capacity magazines.

The president also addressed immigration— calling for Congress to pass legislation to protect Dreamers, and provide a pathway to citizenship.

"Immigrants have done so much for America throughout this pandemic and throughout history. The country supports immigration reform," Biden said. "Let’s act."

While he discussed immigration reform, the president did not address the crisis at the U.S. southern border, as his administration continues to grapple with a migrant surge.

The Biden Administration has cast the situation as a "challenge," and blamed the Trump administration for its immigration policy. But initial CBP numbers for last month indicate that the agency is on track to have encountered more than 171,000 migrants in March—a 15 year high.

In closing, Biden again addressed the Capitol riot on Jan. 6.

"As we gather here tonight, the image of a violent mob assaulting this Capitol, desecrating our democracy remain vivid in all of our minds. Lives were put at risk, many of your lives. Lives were lost. Extraordinary courage was summoned. Insurrection was an existential crisis, a test of whether our democracy could survive. And it did," Biden said, while saying the "struggle is far from over."

Biden said adversaries of America "are betting we can’t."

"We have to prove them wrong," Biden said. "Autocrats will not win the future. We will."

"We’re vaccinating the nation. We’re creating hundreds of thousands of jobs. We’re delivering real results people can see and feel in their own lives. Opening the doors of opportunity. Guaranteeing fairness and justice," the president said.

The president is required by the Constitution to "from time to time give to the Congress Information on the State of the Union."

But Biden’s speech Wednesday night was a Joint Session Address—which presidents deliver to Congress in the first months after assuming office instead of a State of the Union, which they do starting their second year.

Biden’s address took place later than most new presidents in recent years. Former President Trump, for example, gave his first address to Congress on Feb. 28, 2017. The delay in Biden’s address, the White House said, was largely attributable to the coronavirus pandemic.