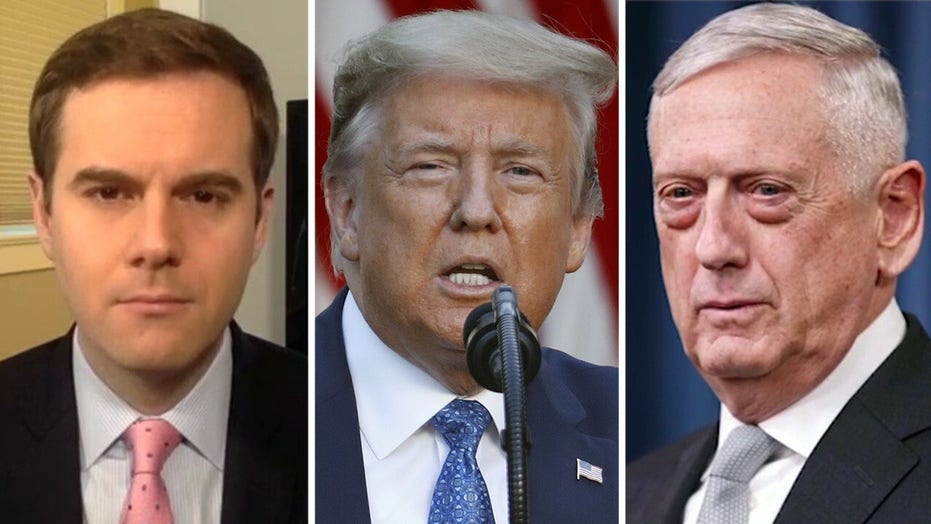 Guy Benson: Trump should listen to what Mattis is saying instead unleashing childish attacks

Joe Biden is calling the scathing criticism of President Trump by his first defense secretary -- retired Marine Gen. James Mattis -- a “powerful indictment” of the president’s response to the unrest in cities across the country sparked by the death of George Floyd while in police custody.

The day after Mattis described the United States' past three years "without mature leadership" under Trump, who “tries to divide us” and who threatens constitutional order, the former vice president and presumptive Democratic nominee tweeted that "Jim Mattis and I haven’t always agreed on everything, but you'd be hard-pressed to find a more powerful indictment of Trump's actions and character than the one he's written.”

TRUMP FIRES BACK AFTER MATTIS' CONDEMNS PRESIDENT'S 'MOCKERY' OF THE CONSTITUTION

Then quoting from Mattis’ statement, Biden added: "We do not need to militarize our response to protests. We need to unite around a common purpose."

Biden’s been extremely critical of the president’s response to peaceful protests, as well as violent clashes in the week and a half since Floyd died after a Minneapolis police officer put his knee on Floyd’s throat for at least eight minutes in moments captured on cellphone footage.

The statement by Mattis -- which he gave to The Atlantic on Wednesday -- came after the president threatened to deploy the military in cities across the country. And it came after federal forces on Monday forcibly dispersed a crowd of demonstrators from St. John’s Episcopal Church in Lafayette Square in the nation’s capital, which allowed the president to make the short walk from the White House to hold a Bible in front of the church for a photo op that included Defense Secretary Mark Esper.

“When I joined the military, some 50 years ago,” Mattis said, “I swore an oath to support and defend the Constitution. Never did I dream that troops taking that same oath would be ordered under any circumstance to violate the Constitutional rights of their fellow citizens -- much less to provide a bizarre photo op for the elected commander-in-chief, with military leadership standing alongside.”

Excoriating the president, he urged Americans to "reject and hold accountable those in office who would make a mockery of our Constitution."

The president tweeted that Mattis’ “primary strength was not military, but rather personal public relations. I gave him a new life, things to do, and battles to win, but he seldom 'brought home the bacon'. I didn’t like his 'leadership' style or much else about him, and many others agree. Glad he is gone!"

Mattis resigned in late 2018 after disagreeing with the president’s move to reduce the deployment of U.S. troops in Syria.

Mattis served in the Marine Corps for 44 years, rising to the rank of general during the wars in Afghanistan and Iraq. He was already serving for two years as commander of the U.S. Joint Forces Command when then Sens. Barack Obama and Biden were sworn in as president and vice president, respectively, in January 2009. Mattis held that position until 2011 when he became commander of the U.S. Central Command.

Mattis retired from that position in 2013 after reportedly not seeing eye-to-eye with the Obama White House over his desire to increase the U.S. troop presence in Syria, which was engulfed in a civil war.