Former Vice President Joe Biden on Thursday called for a nationwide mask mandate to help fight the spread of the coronavirus pandemic.

“Every American should be wearing a mask when they’re outside for the next three months at a minimum,” Biden told reporters in Wilmington, Del.

The presumptive Democratic presidential nominee spoke after sitting down for a briefing on the coronavirus with public health experts. He was joined at the briefing by his newly named running mate, Sen. Kamala Harris of California.

TRUMP SAYS HE'S 'A BELIEVER IN MASKS,' BUT STOPS SHORT OF NATIONAL MANDATE IN CORONAVIRUS FIGHT

"Let’s institute a mask mandate nationwide starting immediately and we will save lives. The estimates are we will save over 40,000 lives in the next three months if that is done," Biden emphasized.

And the former vice president stressed that wearing a mask "increases exponentially the prospect that if you are a carrier and you don’t even know it, that you will not infect anyone if you cough, sneeze, sing, shout."

And pointing to the nation's death toll from the coronavirus, Biden said that "a lot of people are dying. We’re up over 160,000 people dead so far."

The current death toll in the U.S. stands at just over 166,000 people, with more than 5.2 million confirmed cases of COVID-19 across the country.

On Wednesday, there were nearly 56,000 new cases reported and 1,499 deaths from the coronavirus, the highest number of fatalities in a single day since May.

“That’s what real leadership looks like,” Harris said after Biden’s comments on masks.

President Trump has not called for a nationwide mandate.

Last month, the president said he is “a believer in masks” but added that he’s leaving it up to state governors to decide whether or not to implement an order requiring people to wear them in public. 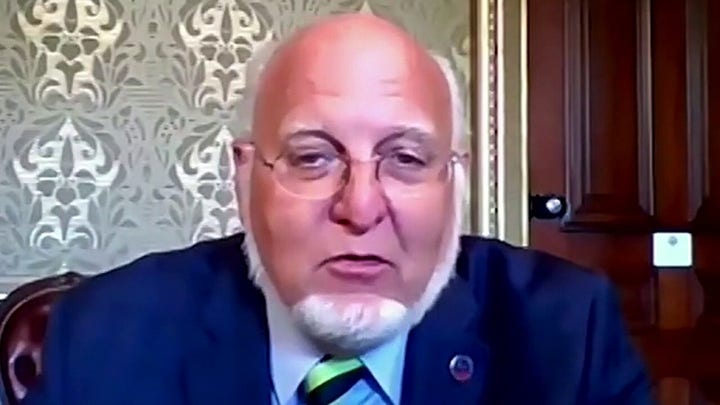 Speaking during an exclusive interview on “Fox News Sunday,” the president deferred to state officials on the issue of masks when questioned by moderator Chris Wallace.

“Everybody who is saying don’t wear a mask – all of sudden everybody’s got to wear a mask, and as you know masks cause problems, too,” Trump said. “With that being said, I’m a believer in masks. I think masks are good.”

Last month, the president wore a mask in public for the first time during a trip to Walter Reed National Military Medical Center.

It was a striking reversal for Trump, who had rebuffed wearing a face covering in public since the pandemic swept across the nation in March.

Biden -- who for months has repeatedly criticized the president's handling of the coronavirus -- emphasized that "it didn’t have to be this way."

He aruged that if the president had acted earlier in responding to the coronavirus, lives would have been saved.

The president has repeatedly praised his response to the coronavirus - and responding to charges that he downplayed the pandemic at first, Trump points to his ban in early February from incoming flights from China, where the pandemic originated.

Hours before Biden and Harris spoke, the president said in an interview with Maria Bartiromo on the Fox Business Network that "we're still in the pandemic, which will be going away, as I say, it will be going away. And they scream, 'how you can you say that?' I said, 'because it's going to be going away.'"

A new national poll indicates that 52% of Americans say the United States is doing a worse job than other nations handling the coronavirus pandemic, with 29% saying the U.S. is coping about the same as other countries, and just 15% saying America’s doing a better job.

The survey, by Monmouth University, also showed that only 38% feel the U.S. will be able to limit the impact of the virus in the coming weeks.

According to the poll, 40% of Americans approved of the job the president’s doing combating the coronavirus pandemic, with 57% giving him a thumbs down.

Biden took two questions from reporters ahead of the coronavirus briefing, but neither the former vice president or Harris answered questions after making their comments regarding the mask mandate.

The mask mandate was showcased in a TV commercial that the Biden campaign quickly turned around on Thursday. In the 60 second spot, Biden also calls for increased coronavirus testing, personal protective equipment for all health care workers on the front lines in the battle against the pandemic and more support for schools and child care programs.

The former vice president also emphasized that “we need to protect the populations most at risk: our seniors - vulnerable populations with preexisting conditions. We need real plans, real guidelines with uniformed, nationwide, standards.”

The Biden campaign says the ad will run on TV and digitally in key general election battle ground states as part of their weekly buys of $20-24 million.