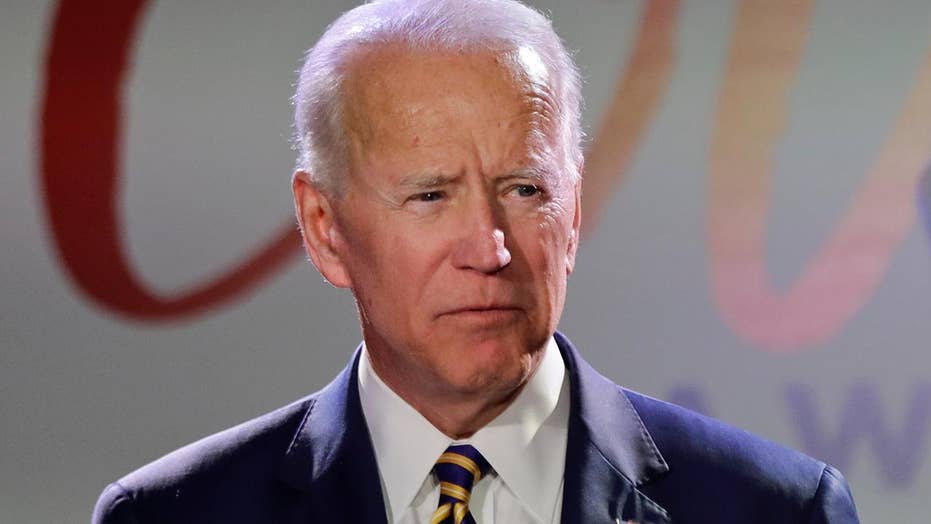 The former vice president argues that the party has not shifted far-left. Is he right? The 'Fox News @ Night' Power Panel debates.

Joe Biden is expected to declare his candidacy for president next week, two sources with knowledge of the former vice president’s plans confirmed to Fox News on Friday.

“The plan is to go Wednesday,” said a person close to Biden’s inner circle, who asked for anonymity to speak more freely. “But it could slip to Thursday.”

MORE SIGNS, BOTH INTENTIONAL AND UNINTENTIONAL, OF EXPECTED BIDEN 2020 RUN

The source added that “the theme for the announcement is going to be ‘the battle for the soul of America.’”

The announcement, first reported by The Atlantic, would end months of speculation as the 76-year-old Biden mulled making what would be a third White House bid. Despite the recent #MeToo controversy complicating his would-be campaign, the former vice president has remained at the top of most public opinion polls.

The rollout, according to sources, could include a retail event with Biden and his wife Jill either later on the day of the announcement or the following day. That would be followed by a policy speech within a week that lays out the broader themes of the campaign. The rollout would then continue with visits to the early voting primary and caucus states over the course of a month.

Sources confirmed that the Philadelphia Museum of Art – known nationally for the scene of the fictional Rocky Balboa’s training on the museum’s steps in the movie "Rocky" – is under consideration as a site for a speech by Biden during the campaign rollout.

News of the launch came one day after Biden traveled to Boston to address and support striking Stop & Shop supermarket workers. The move appeared to be another signal the former vice president – who’s long been a friend to the labor movement – was gearing up for a White House bid.

It was the latest sign that Biden was planning to push past the controversy that arose when numerous women alleged Biden had made them feel uncomfortable with what was described as inappropriate touching. As more and more women came forward, Biden eventually addressed the controversy, vowing to be "more mindful about respecting personal space."

As Biden prepares for next week’s expected launch, sources tell Fox News that campaign staff is being lined up and Biden political advisers are in the process of hiring political operatives in the early voting primary and caucus states.

Nearly every public opinion poll in the race for the 2020 Democratic presidential nomination suggests that Biden, thanks to his strong name recognition, would start his campaign as the front-runner among a field of nearly 20 contenders.