JERUSALEM, Israel – President Biden signed a declaration in Jerusalem Thursday pledging never to allow Iran to acquire nuclear weapons and committing to partnering with other countries to confront Tehran’s aggression and destabilizing activities in the region.

The Jerusalem U.S.-Israel Strategic Partnership Joint Declaration was announced following a bilateral summit between Biden and Israeli Prime Minister Yair Lapid in the Israeli capital. This reaffirms the U.S. strategic commitments to its closest ally and seeks to expand the longstanding security relationship between the countries. It also promises to broaden and build upon the Abraham Accords normalization agreements initiated by former President Donald Trump in 2020.

President Joe Biden will meet with Israeli and Palestinian leaders during his trip there. In Saudi Arabia he will meet with Crown Prince Mohammed bin Salman. ((AP Photo/Susan Walsh))

Biden said that a nuclear-armed Iran would be a threat to all. "Ensuring Iran never obtains a nuclear weapon is of vital security interest to Israel and the United States and for the rest of the world as well," said Biden in a press conference following the signing. "I continue to believe that diplomacy is the best way to achieve this outcome, and we'll continue to work with Israel to counter other threats from Iran throughout the region."

OIL, IRAN AND NORMALIZATION TOP THE AGENDA AS BIDEN EMBARKS ON TRIP TO ISRAEL AND SAUDI ARABIA

Lapid said words and diplomacy alone would not stop Iran.

"The only thing that will stop Iran is knowing that if they continue to develop their nuclear program the free world will use force," he said, adding, "The only way to stop them is to put a credible military threat on the table."

Biden arrived in Israel on Wednesday afternoon as part of his first trip to the Middle East as president. On Friday, Biden will visit the West Bank city of Bethlehem to hold meetings with Palestinian Authority President Mahmoud Abbas before heading to Saudi Arabia, where there is also concern about Iran’s growing hegemony in the region and its efforts to become a nuclear nation.

There is also hope that his stop in the region’s largest country will repair U.S. relations with the House of Saud, paving the way to alternative oil sources as Russia’s war in Ukraine drives up gas prices, and also strengthening regional alliances with states that share U.S. interests. There are few expectations that Biden’s flight from Tel Aviv to Jeddah in Saudi Arabia will immediately establish formal ties with Israel. 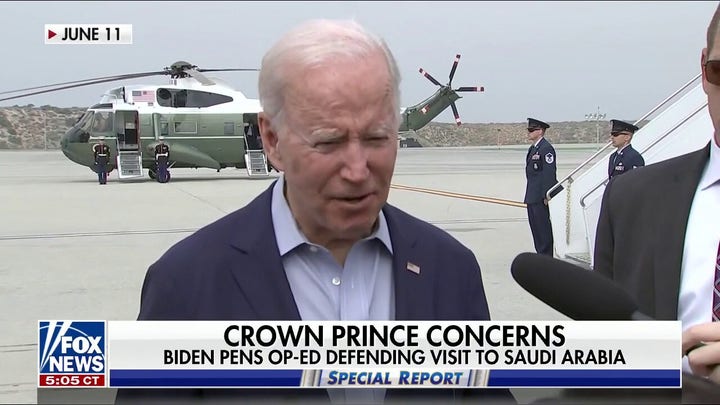 Biden has faced criticisms over his trip to Saudi Arabia over the country’s human rights record, in particular the 2018 assassination of prominent Saudi dissident and journalist Jamal Khashoggi. Immediately following the president’s inauguration, the administration released a CIA assessment claiming that Crown Prince Bin Salman had directly ordered Khashoggi’s murder.

In response to a journalist’s questions over his visit to Saudi Arabia, Biden said: "My views on Khashoggi have been absolutely clear, and I have never been quiet talking about human rights."

He said the overall goal of his trip to Saudi Arabia was to promote U.S. interests and reassert its influence in the region. "We are meeting with nine other heads of state, not just Saudi Arabia," said Biden. "I want to be clear we must continue to lead in the region and not leave a vacuum that will be filled by China or Russia."

A readout from the closed-door meetings between the two leaders and their teams Thursday said Lapid had reiterated to the president Israel’s opposition to a return to the 2015 nuclear deal with Iran, known as the Joint Comprehensive Plan of Action, and emphasized the need to pressure Iran to return to the negotiating table for an alternative agreement.

"I am hopeful that it will be a step in the right direction of Biden explicitly putting military force on the table," Mark Dubowitz, CEO of the Washington, D.C.-based Foundation for Defense of Democracies (FDD), told Fox News Digital.

Dubowitz said "It was a rhetorical shift, which is helpful. But it needs to be backed by a more explicit presidential declaration, a congressional authorization for the use of military force, and force positioning — as well as the transfer of more advanced weaponry to Israel — in order to break the nuclear will of Iran’s supreme leader."

A poll published by the Israel Democracy Institute ahead of Biden’s visit found that the majority of Israelis, 75%, are dubious about whether the president would consider their interests on the matter of confronting Iran.

Biden and Lapid also discussed the importance of the Abraham Accords and expanding regional cooperation to include more countries.

In his statement during the press conference Thursday, Lapid commended the president for flying from Israel to Saudi Arabia and asked him to take a message of peace to the leaders of Saudi Arabia, Qatar, Kuwait, Oman, and Iraq, who he will meet with this weekend. 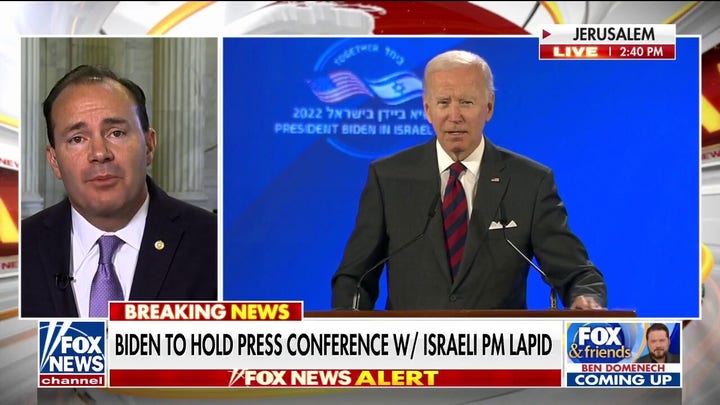 Biden responded that he would carry that message and "continue building on the Abraham Accords, which I strongly support because they deepen Israel's integration into the broader region and establish lasting ties for business cooperation and tourism."

Although it appears Biden’s visit to the region will unlikely bring about the immediate establishment of ties between Israel and Saudi Arabia, there is hope that a small, but growing number of measures will bring the countries closer together.

Asher Fredman, director for Israel at the Abraham Accords Peace Institute, told Fox News Digital that "peace and normalization between Israel and Saudi Arabia will most likely take place through a series of small, measured and increasingly open steps."

"This will take time, but we are moving in the right direction," he said, adding, "growing cooperation between Abraham Accords nations in areas such as trade, energy and innovation is already demonstrating the tremendous potential of peace to the countries of the region, including Saudi Arabia."

"With Europe in the midst of a land war and peace spreading through the Middle East, President Biden’s trip from Jerusalem to Jedda reflects the fact that expanded regional cooperation can help provide solutions to urgent challenges in fields such as food, energy and logistics," added Fredman.

Biden and Lapid also held the first-ever I2U2 virtual summit together Thursday with the leaders of India and the United Arab Emirates. A White House statement following the meet-up said the goal of "this unique grouping of countries was to harness the vibrancy of our societies and entrepreneurial spirit to tackle some of the greatest challenges confronting our world, with a particular focus on joint investments and new initiatives in water, energy, transportation, space, health, and food security."

Ruth Marks Eglash reports on Israel, the Middle East and Europe. You can follow her on Twitter @reglash