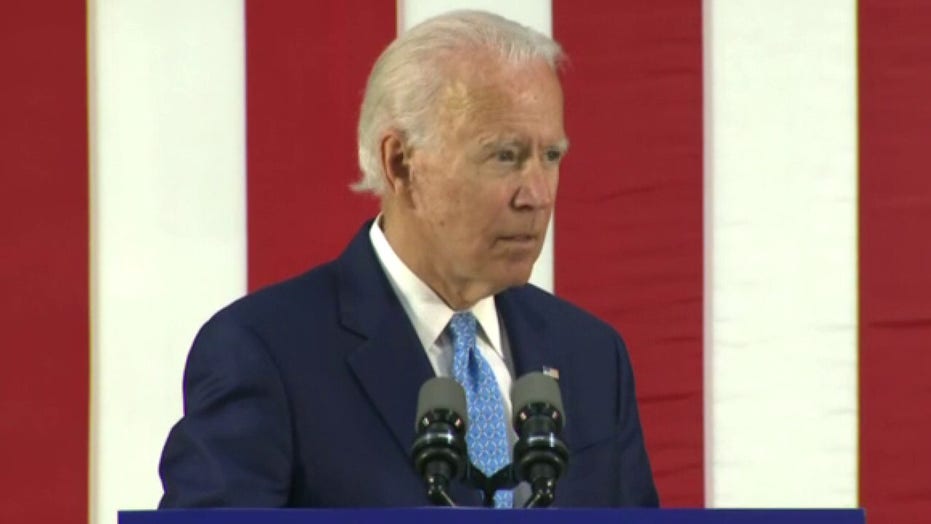 Biden: Much too early to make any judgement on polling data

2020 presumptive Democrat nominee Joe Biden reacts to the 'very good' recent polling data on his campaign at a press conference.

The former vice president’s campaign announced on Wednesday night that they, the Democratic National Committee and their joint fundraising committees hauled in a combined $141 million in June, which was by far the campaign’s best monthly figure to date.

Biden’s campaign called it a “jaw-dropping sum of money.”

The presumptive Democratic presidential nominee’s campaign also reported bringing in a combined $282 million with the DNC during the April-June second quarter of fundraising, which was another record. And officials touted that the DNC outraised their rivals for a second straight month.

The announcement from Biden’s team came just a couple of hours after the president’s reelection campaign reported that they, the Republican National Committee and their joint fundraising ventures brought in a combined $131 million in June — and more than $266 million the past three months. The June and second quarter hauls were both records for the Trump campaign and the RNC.

Trump’s team described the fundraising figures as “massive” and “staggering.”

In an email to supporters, Biden campaign manager Jen O’Malley Dillion called the fundraising figures “incredibly exciting” and said they were “a true testament that the people are standing behind Joe Biden.”

The campaign spotlighted its grassroots outreach and fundraising, reporting that 68 percent of last month’s donors were new and that the overall average online contribution was $34.

Trump campaign manager Brad Parscale – in reporting their fundraising figures – said that the “monumental June fundraising haul proves that people are voting with their wallets and that enthusiasm behind President Trump’s reelection is only growing.”

And RNC chair Ronna McDaniel emphasized that “after yet another haul of record-breaking support, the voters are speaking loud and clear -- they support President Trump.”

The president’s been raising money for his re-election bid since entering the White House three and a half years ago. And the re-election effort’s hauled in an unprecedented $947 million the past two years.

The former vice president – who declared his candidacy in April of last year - struggled to bring in cash for much of his campaign. He raised just $8.9 million in January and $18 million in February. But he saw his fundraising spike starting in March, as he became the clear frontrunner for the Democratic nomination and much of the party coalesced around his White House bid. Biden become the presumptive presidential nominee in April, as his last remaining primary rival – Sen. Bernie Sanders of Vermont  - dropped out of the race and backed the former vice president.

The fundraising reports come as Biden’s widened his lead over Trump in most national public opinion polls. He also tops the president by single digits in most of the recent surveys in the key general election battleground states.

Along with polls, fundraising is another crucial campaign metric. The fundraising dollars can be used by candidates to hire more staffers, increase grassroots voter outreach efforts, and produce and run TV, digital, radio, print ads, and direct mail.