Could we see a Biden versus Beto 2020 Democratic primary?

Biden, who served as President Barack Obama’s vice president for both terms, has long been mentioned as a potential 2020 candidate after he considered a presidential run in 2016.

The Associated Press reports that past and current advisers to Biden, 76, have expressed some “concerns about age” and have raised the possibility of O’Rourke, 47, as a possible running mate.

Last month, O’Rourke (whose birth name is Robert Francis) lost his bid to unseat Texas Sen. Ted Cruz, but nonetheless became a national Democratic figure who managed to pull in more than $80 million in donations -- and was the subject of multiple media profiles that zeroed in on his skateboarding and punk rock background.

O’Rourke himself has zoomed to the top of initial 2020 polls as a possible presidential candidate, leapfrogging prospective (but still-unannounced) candidates including Sens. Elizabeth Warren, D-Mass., Cory Booker, D-N.J., and Kamala Harris, D-Calif.

But on Friday, O'Rourke again demurred on a possible run: “No decision, no decision on that,” he said during a town hall meeting in Austin, Texas.

Even so, he offered the audience his thoughts on what the Democrats’ candidate will need in 2020.

"This is the mother of all tests for this democracy and whether we can run a campaign, have candidates at all levels from school board to the White House who are willing to focus on issues, on our potential, on our promise, on the future instead of our fears, instead of attacking one another personally, instead of going for the most base impulse and instincts among us,” he said. 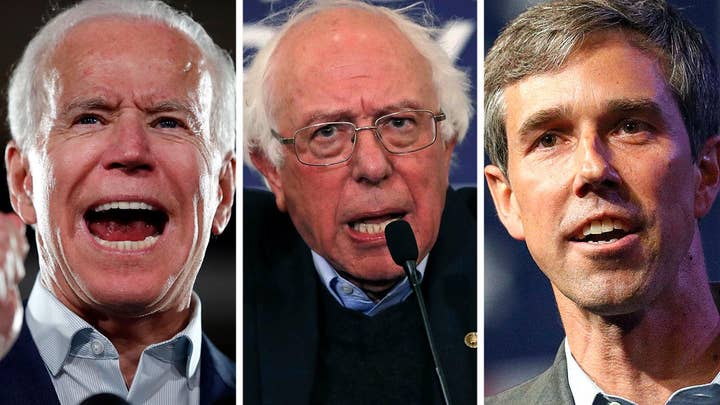 Should Biden capture the presidency, he'll be the oldest person ever to win the White House. President Ronald Reagan was 73 when he won re-election, while President Trump was 70 in 2016.

Age could therefore prove to be a vulnerability for Biden, and is why he is reportedly considering O’Rourke as a running mate. It may also be why he is emphasizing his experience and decades as a public servant as selling points.

“I think I’m the most qualified person in the country to be president. The issues that we face as a country today are the issues that I’ve worked on my whole life,” Biden, who was a senator for 36 years, told a crowd in Montana this month, according to The Missoula Current.

According to AP, Biden intends to spend the coming weeks deliberating with family over his next steps and is expected to make a decision in January or February.

Trump has welcomed the idea of a Biden run, having frequently feuded with the former vice president, and said running against Biden would be a “dream” during an interview with CBS News earlier this year.

“Look, Joe Biden ran three times. He never got more than 1 percent, and President Obama took him out of the garbage heap, and everybody was shocked that he did,” Trump said at the time. “I’d love to have it be Biden.”