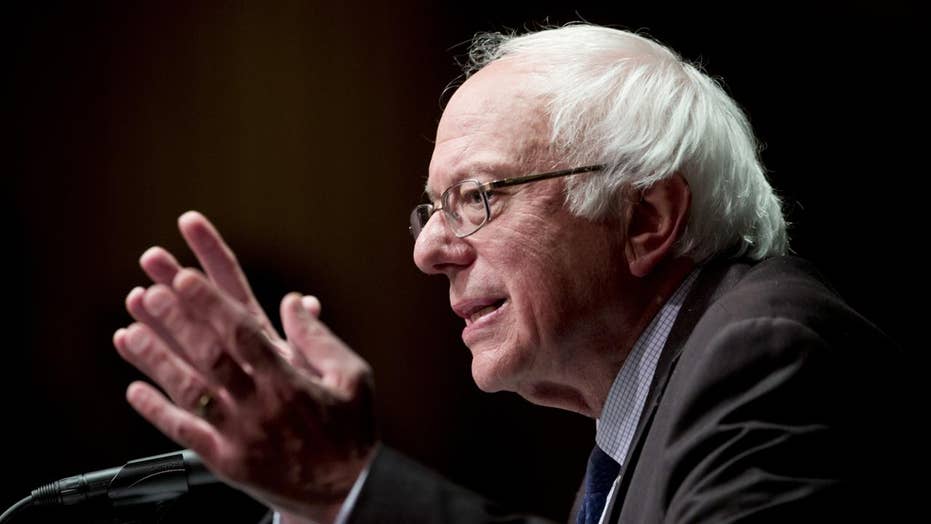 Sen. Bernie Sanders wants to guarantee a job for all Americans

Marc Lotter, former special assistant to President Trump, on Sen. Bernie Sanders's (I-Vt.) proposal for the federal government to guarantee a job paying $15 an hour and health-care benefits to every American worker.

The speculations of Vermont Senator Bernie Sanders making another bid for President in 2020 were fueled on Monday after his former campaign manager said he “has more energy than people half his age” and could produce medical records showing he could serve a full term as president.

Sanders announced Monday that he will seek re-election to the U.S. Senate. There was little doubt that he will run again in 2018 for the seat he has held since 2007, but his maneuvers in the political environment are largely viewed as the preparation for the 2020 campaign.

He dismissed the criticism of Sanders’ age, who will be 79 in 2020, as a reason why he shouldn’t run. “Anybody who follows Bernie Sanders for one day and sees his schedule, and how rigorous it is, and how he drives everybody around him, works them into the ground with the amount of work and energy he has, I think they would understand that his chronological age is just not really a measure of his true age,” he said in an interview with left-wing online magazine Salon.

“Bernie Sanders is an extremely energetic and vigorous person, and has more energy, I would say, than people half his age,” Weavers added.

While remaining tight-lipped, the former campaign manager said Sanders could produce medical records showing he could serve a full term as the president. “I’m certain that he could. Yes,” he said.

Weavers suggested Sanders’ 2016 run was a conflict between the party’s establishment and the grassroots who are more sympathetic to socialism and opposed to Bill Clinton’s third way politics.

“Bernie Sanders is an extremely energetic and vigorous person, and has more energy, I would say, than people half his age."

Next month, Sanders will swing by California – but he won’t lend his support to any of the candidates running in midterms. Instead, he will effectively campaign in the state that Hillary Clinton won by nearly 10 percent in the Democratic primary.

He will meet with trade unionists and rally with Black Lives Matter activists such Shaun King and Patrisse Cullors. Sanders was criticized in 2016 for failing to reach out to Black voters and earn their vote in Southern states.

But despite Sanders’ best attempts to energize the support among diverse groups, many remain skeptical he could connect them the way other candidates, even Clinton, managed to do.

“I do believe Bernie Sanders struggled then and clearly now with black voters overall,” said Ray McKinnon, a black pastor from Charlotte, North Carolina, told Vox. “The guy’s from Vermont, it’s not like he has a massive [black] constituency. He failed to connect on a visceral sense.”

Sanders came under fire last month after brushing off the legacy of former President Barack Obama, describing him in an event as “charismatic individual” and “extraordinary candidate” while simultaneously saying the Democratic Party hasn’t achieved much in the last 15 years.