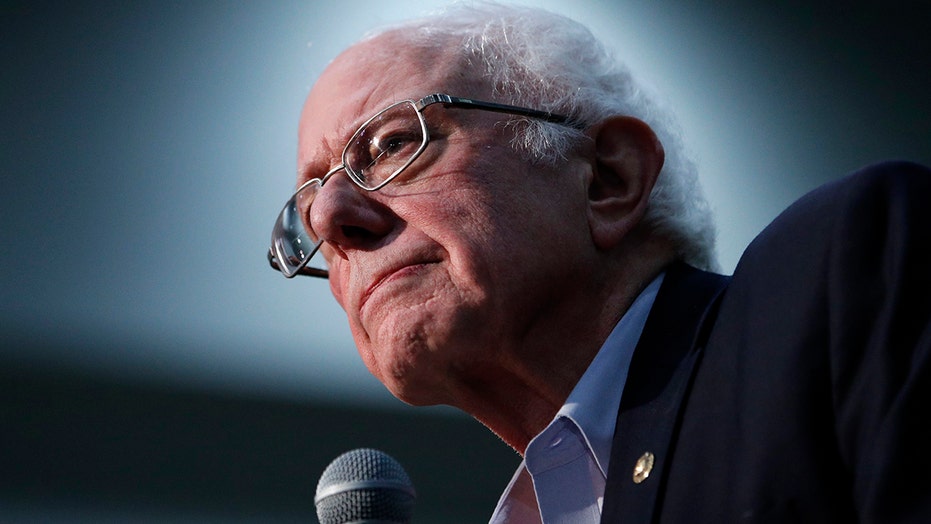 Sen. Bernie Sanders, I-Vt., says he does not consider himself the Democrat front-runner in the upcoming presidential elections, but he's confident he is the one to beat President Trump in a 2020 face-off.

"We are the strongest campaign to defeat the most dangerous president in modern American history," Sanders said at a CNN town hall event in New Hampshire just days before the first-in-the-nation primary is slated to take place on Tuesday.

Sanders, who has consistently polled in the top four candidates vying for the Democratic nomination -- neck and neck with former Vice President Joe Biden, and leading Sen. Elizabeth Warren, D-N.H., and former South Bend, Ind., Mayor Pete Buttigieg -- is projected to beat Trump is a theoretical matchup 49 percentage points to 45.3, according to RealClearPolitics polling data.

The numbers suggest he is almost as close as Biden is to beating Trump, as he polls at 50 percentage points to 44.7.

Still, some voters worry that the infighting among Democrats -- even as the field is expected to thin out following the first four primaries -- will deter the party from defeating Trump.

Sanders lambasted the president -- who just one day earlier was acquitted on two charges of impeachment -- for his "ugliness, racism, homophobia and religious bigotry," and said: "I have zero doubt that we will bring the party together."

Sanders, along with several of the other Democrat hopefuls, packed up from Iowa and moved on to New Hampshire, even as the vote count initially remained uncertain in a heavily botched first attempt at early voting.

"We've got enough of Iowa, I think we should move on to New Hampshire," Sanders said of the ordeal. "It is really sad that the Democratic Party of Iowa, if I may say so, screwed up the counting process quite so badly."

Both Sanders and Buttigieg claimed victory in the state. The Iowa Democratic Party (IDP) reported 100 percent of the votes on Thursday night -- three nights after the caucuses closed.

Sanders reiterated Thursday night at the town hall that he garnered 6,000 more popular votes than any other candidate, while Buttigieg has held firm that he is the caucus' winner because of his lead in state delegate equivalents (SDE) – which are the traditional way the Iowa caucus results have been reported for half a century. Sanders has argued that this method has become increasingly unimportant in determining caucus victories.

Sanders said he predicted that he and Buttigieg will have an equal number of delegates when all the caucus data becomes available.

Regardless, both candidates are projected to lead in New Hampshire, as well. A Monmouth University poll released Thursday shows Sanders has the support of 24 percent of likely voters, mildly ahead of Buttigieg who is polling at 20 percent.