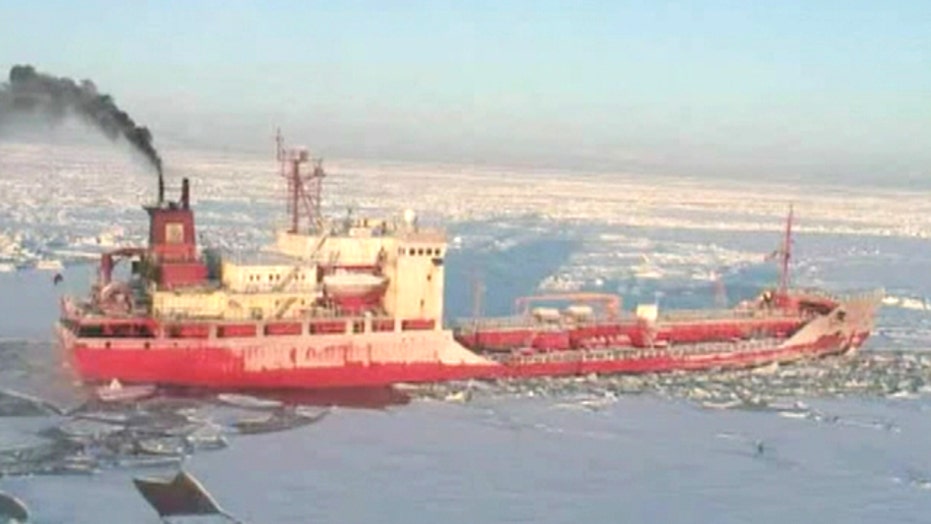 New Cold War brewing between US, Russia in the Arctic?

While the Obama administration focuses on hotspots like the Middle East and Asia, some lawmakers worry the U.S. is ignoring what could be a critical battleground – the Arctic Ocean.

The permanent sea ice around the North Pole has been receding since the 1970’s. Countries are now staking their claims, whether it’s for oil, valuable shipping lanes or national defense.

“The Arctic is already in play,” said Rep. John Garamendi, D-Calif. “We do know there are many countries that are trying to set their sights on the Arctic, and that’s going to be an issue.”

The biggest immediate concern, some say, is the need for more icebreakers -- vessels that can navigate the still-treacherous conditions. The U.S. Coast Guard has just two, and they have been busy. In 2012, the Healy escorted a ship to deliver oil to Nome, Alaska. And just weeks ago, the Polar Star was sent to the Antarctic to help free two research vessels stuck in ice. Both icebreakers are nearly 40 years old.

Russia, meanwhile, has 25 icebreakers. Six of them are nuclear powered.

Alaska Democratic Sen. Mark Begich is critical of the Obama administration for largely ignoring the Arctic, and the battle for influence happening there.

“It’s like they’ve never heard of it,” he said. “With the Obama administration we’ve had to push back pretty hard to convince them and show them why they need to invest in not only icebreakers, but forward operating bases for the Arctic.”

Begich still views Russia as a valuable ally, but one that could dominate the economic benefits in the Arctic if the U.S. doesn’t catch up soon.

But others say if oil and shipping lanes are what’s at stake, private industry -- and not taxpayers -- should bear the cost. A new icebreaker runs nearly $800 million. It even costs $300 million to retrofit an existing ship to be an icebreaker.

“I think the Pentagon hasn’t really proven the need yet,” said Bill Hartung, of the Center for International Policy. “Nobody is going to attack us from up there. If there’s issues getting to resources, I think we’re going to need some rules of the road and cooperative to deal with that.”

Complicating the push for more icebreakers is the timing and budget turf wars. The Coast Guard, which operates the ships, says they’re too expensive to absorb the cost. But the Navy doesn’t want to pony up the money, either, citing the Pentagon’s mandate to cut $70 billion in spending over the next two years.