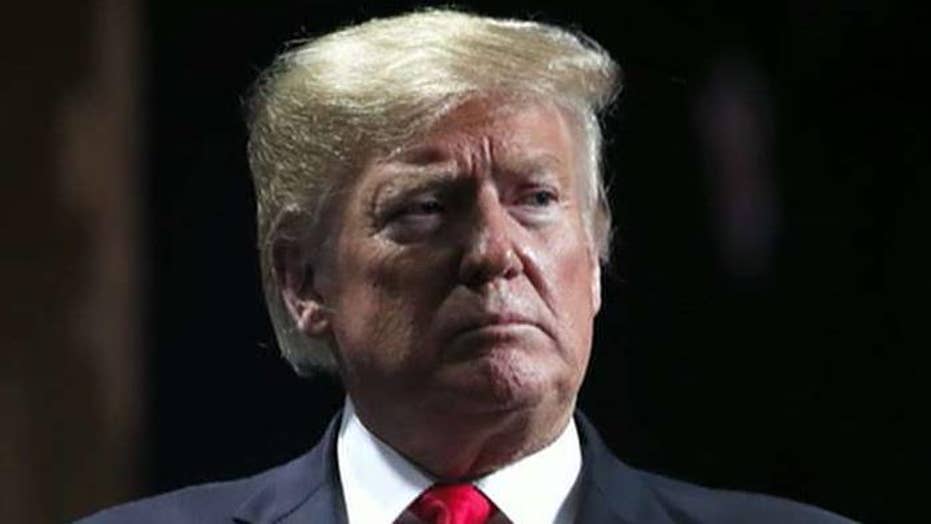 Stew Leonard's Supermarket Stores CEO weighs in on the impact a tariff hike on Mexico would have on American goods.

A weekend news report claiming the U.S. immigration pact with Mexico was a hodge-podge of recycled ideas that America's southern neighbor had already agreed to is coming under fresh criticism, as the Trump administration denies it and a separate report challenges the claims.

The debate follows President Trump's move to threaten crushing tariffs against Mexico, only to back off late Friday claiming he had extracted an agreement with the country to confront the flow of migrants from Central America. The New York Times, in a report Trump continues to slam, swiftly challenged the administration's narrative by claiming parts of the agreement were already in the works before the tariff drama.

But The Washington Post on Tuesday published a separate report, citing Trump administration and Mexican officials as well as documents, giving a different perspective. The Post called Mexico’s promises “unprecedented” and the measures “more substantial” than promises made by Mexican officials in the past.

According to the joint declaration issued by the State Department, Mexico will take “unprecedented steps to increase enforcement to curb irregular migration, to include the deployment of its National Guard throughout Mexico, giving priority to its southern border.”

U.S. officials told the Post they were impressed with Mexico’s promise to deploy 6,000 national guard troops to its border. Mexican government documents said it was “the first time in recent history that Mexico has decided to take operational control of its southern border as a priority.”

But the Times’ story published Saturday reported that the Mexican government had already pledged to deploy its guard to the border in March during talks with former Homeland Security Secretary Kirstjen Nielsen.

Trump blasted that report, calling it a “FRAUD” and “nothing more than a badly reported ‘hit job’ on me.”

And on Sunday, acting Homeland Security Secretary Kevin McAleenan pushed back and insisted “all of it is new,” including the agreement to dispatch 6,000 troops—a move Mexico has described as an “acceleration.”

“This is the first time we’ve heard anything like this kind of number of law enforcement being deployed in Mexico to address migration, not just at the southern border but also on the transportation routes to the northern border and in coordinated patrols in key areas along our southwest border,” McAleenan said on “Fox News Sunday,” adding that “people can disagree with the tactics,” but “Mexico came to the table with real proposals.”

The Times report did say that Mexico’s pledge of 6,000 troops was “larger than their previous pledge,” and that Mexico’s “agreement to accelerate the Migrant Protection Protocols could help reduce what Trump calls ‘catch and release’ of migrants in the United States by giving the country a greater ability to make asylum-seekers wait in Mexico.”

Through the agreement, the U.S. is slated to extend its policy of returning asylum applicants to Mexico while their claims are processed. The U.S. also committed to accelerating asylum claims while Mexico said it will “offer jobs, healthcare and education according to its principles.”

The deal also stated that Mexico will take “decisive action” to dismantle smuggling and trafficking operations, while both countries will increase cooperation to protect the border.

On Monday, Secretary of State Mike Pompeo said the deployment of the 6,000 Mexican troops was “the biggest effort to date that the Mexicans have committed.” Pompeo acknowledged that it was “something that we pressed for with them throughout the time of the negotiations.”

He added: “I’ve seen some reporting that says that these countless hours were nothing, that they amounted to a waste of time. I can tell you that the team here at the State Department believes full-throatedly that this an important set of agreements, important set of understandings, one that we’ll continue to work on.”

But even as the president called the agreement “successful,” he suggested he may again seek to impose tariffs on Mexico if they fall short of their end of the bargain.

“We have fully signed and documented another very important part of the Immigration and Security deal with Mexico, one that the U.S. has been asking about getting for many years. It will be revealed in the not too distant future and will need a vote by Mexico’s Legislative body!” Trump tweeted.

“We do not anticipate a problem with the vote but, if for any reason the approval is not forthcoming, Tariffs will be reinstated!” he added.

For now, the deal ends plans by the Trump administration to slap a 5 percent tariff on all goods coming into the U.S. from Mexico -- something that had sparked fears from both Democrats and Republicans in Congress about the possible economic fallout from such a move. The tariffs were slated to go into effect Monday and continue to increase each month, reaching 25 percent by Oct. 1, 2019.

The U.S.-Mexico deal also comes amid an escalating crisis at the border, with U.S. Customs and Border Protection reporting last week that it apprehended or encountered more than 144,000 migrants at the border in May—levels not seen in over a decade.