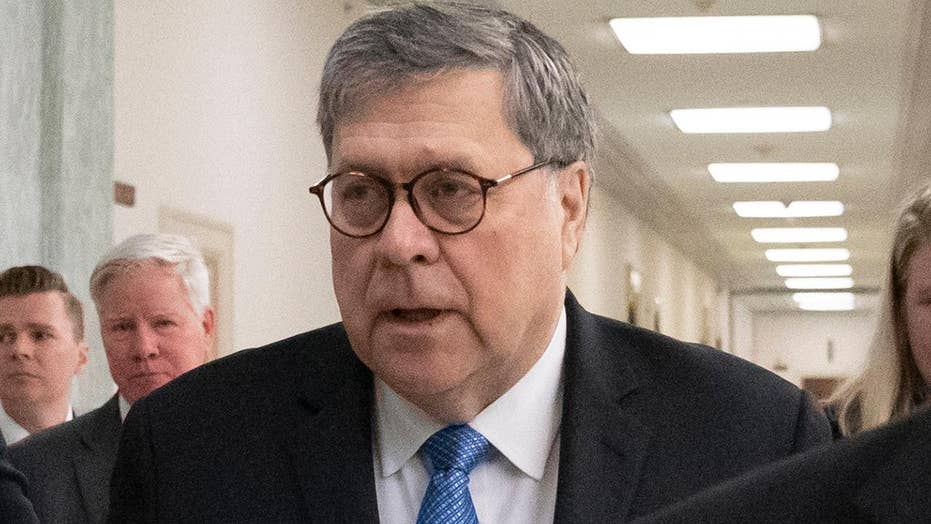 The attorney general is set to make his first appearance before Congress since the release of the Mueller report; Catherine Herridge reports on what to expect at the House budget hearing.

Attorney General William Barr is set to testify Tuesday morning on Capitol Hill, in his first appearance before lawmakers since he revealed the long-awaited central findings of Special Counsel Robert Mueller's investigation into Russian interference in the 2016 election.

Top Democrats have made it clear that, following multiple media reports citing leaks from those close to Mueller's team, Barr will have some explaining to do.

The hearing -- conducted by the House Appropriations Commerce, Justice, Science, and Related Agencies Subcommittee and scheduled to begin at 9:30 a.m. ET -- is expected to include a number of questions on routine budgetary matters. The hearing was scheduled to address Barr's fiscal year 2020 spending request for the Justice Department.

However, Fox News is told Barr's four-page summary of Mueller's conclusions will feature prominently. The subcommittee's chairman, Democrat José Serrano of New York, will cast doubt on Barr's actions in his prepared opening remarks, according to an excerpt released by his office late Monday.

"In extremely quick fashion, you turned a 300-plus page report into a 4-page letter that supposedly summarized [Mueller's] findings," Serrano will say.

Speaking to Fox News on Monday, Serrano indicated that while Barr mainly will face questions concerning appropriations, the Mueller findings would be "almost impossible" to ignore during the hearing.

Serrano also said he was worried Barr would send the Mueller report to Congress with "too many scratch-outs" and redactions.

Barr's letter to lawmakers, which stated that Mueller found no evidence of Trump-Russian collusion despite efforts by Russians to involve the Trump campaign, also said that Mueller had not exonerated Trump on the issue of obstruction of justice.

Barr and Attorney General Rod Rosenstein cleared the president of criminal culpability on that count as well, noting that Mueller had provided evidence on both sides of the issue and left the determination up to them. In his letter, Barr noted that legally-mandated redactions were in progress before the report itself could be released to lawmakers.

"Last week, the New York Times reported that the Special Counsel’s office had already created summary documents that were ignored in your letter, and that some investigators within the Special Counsel’s office felt that your summary understates the level of malfeasance by the President and several of his campaign and White House advisors," Serrano's prepared statement asserts.

WOW: CHELSEA HANDLER SAYS SHE HAS 'FEELINGS' FOR ROBERT MUELLER

"The American people," Serrano will say, "have been left with many unanswered questions; serious concerns about the process by which you formulated your letter; and uncertainty about when we can expect to see the full report."

Trump attorney Rudy Giuliani hit back against those leaks last week in an interview with Fox News' "MediaBuzz" with Howard Kurtz.

“That leak really indicates all you need to know about Mueller’s prosecutors,” Giuliani, who favors releasing the Mueller report, said on the Times’ unnamed sources. “Leaking like that…that’s been the biggest canard in this investigation.”

House Appropriations Committee Chairwoman Nita M. Lowey, D-N.Y., will also slam Barr's handling of the report as "unacceptable," according to her prepared remarks.

"I must say, it is extraordinary to evaluate hundreds of pages of evidence, legal documents, and findings based on a 22-month long inquiry and make definitive legal conclusions in less than 48 hours," Lowey will say. "Even for someone who has done this job before, I would argue it is more suspicious than impressive."

The statement also said that every page of Mueller's report was marked that it may contain grand jury material "and therefore could not immediately be released."

A Justice Department official, speaking Thursday on condition of anonymity to discuss a confidential process, said summaries of the findings that Mueller's team included as part of its report also contained grand jury information, making it hard for a swift release.

Fox News is told the Tuesday hearing could also focus on the Trump administration's recent decision not to defend ObamaCare in court, as well as solutions to gun violence.

Serrano's opening statement will be followed by remarks from the top Republican on the subcommittee, Alabama Rep. Robert Aderholt.

On Monday, Aderholt told Fox News he hopes the hearing will focus primarily on appropriations, and not the Mueller report.

Lowey will also speak prior to Barr's opening statement.

Barr will then present an opening statement. The hearing, which is expected to run approximately until noon, will then toggle between questions posed by Democrats and Republicans.