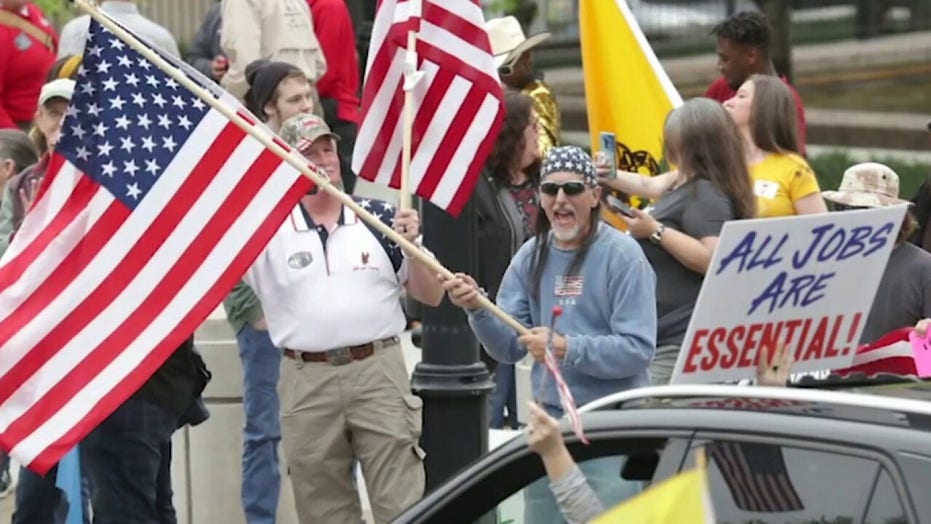 Department of Justice spokesperson Kerri Kupec explains on 'The Story.'

Attorney General Bill Barr has instructed federal prosecutors to "be on the lookout" for overly restrictive state and local shutdown orders that may infringe on people's constitutional rights.

In a memo issued Monday, Barr recognized that while some restrictions are necessary and proper for combating the coronavirus pandemic, others could go too far.

"If a state or local ordinance crosses the line from an appropriate exercise of authority to stop the spread of COVID-19 into an overbearing infringement of constitutional and statutory protections, the Department of Justice may have an obligation to address that overreach in federal court," Barr said.

The attorney general noted that while in the past, the DOJ warned against orders that discriminate against religious institutions, "the Constitution also forbids, in certain circumstances, discrimination against disfavored speech and undue interference with the national economy."

The Justice Department previously filed a statement of interest in a Mississippi lawsuit, siding with a church after local officials tried to stop Holy Week services broadcasting to people sitting in their cars in the parking lot.

While some states are in the process of loosening restrictions as the number of cases decreases, others remain as vigilant as ever. Protests have popped up in some areas of the country as shutdown orders have resulted in a skyrocketing unemployment rate.

In a recent appearance on Hugh Hewitt's radio program, Barr said some state orders were "disturbingly close to house arrest." He said that while the goal was to flatten the curve of COVID-19 cases, that goal has largely been achieved and states should now use "more targeted approaches."

Barr said in his memo that he is placing the head of the Justice Department’s civil rights division and the U.S. attorney for the Eastern District of Michigan in charge of coordinating the department’s efforts to monitor state and local policies and take action if needed.

"Many policies that would be unthinkable in regular times have become commonplace in recent weeks, and we do not want to unduly interfere with the important efforts of state and local officials to protect the public," Barr's memo said. "But the Constitution is not suspended in times of crisis."

President Trump was asked at a Monday press briefing about Barr's directive.