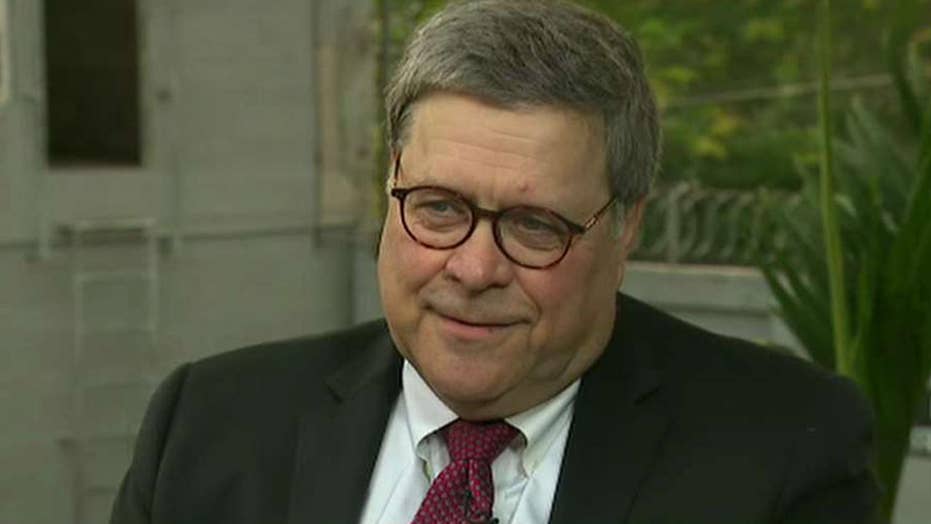 Attorney General William Barr sits down with Bill Hemmer to discuss the use of the anti-Trump Steele dossier by intel officials.

Attorney General Bill Barr, in an exclusive interview with Fox News, revealed that the recently announced review of the origins of the Russia probe will focus in part on a controversial briefing that intelligence officials gave President Trump shortly before he took office in 2017.

Barr told Fox News’ Bill Hemmer in the interview aired Friday that one portion of the review -- which he has tapped U.S. Attorney John Durham to lead -- would cover the time period between Election Day and Inauguration Day, saying “some very strange developments” took place during that time.

Barr specifically was referring to the early January 2017 briefing intelligence officials gave then-president-elect Trump at Trump Tower, and “the leaking of information subsequent to that meeting.” At that meeting, Trump was briefed by intelligence and law enforcement officials on Russian election meddling -- and was also informed by former FBI Director James Comey about the now-infamous anti-Trump dossier which included salacious allegations against him. Details later leaked to the press.

“That’s one of the things … we need to look at,” Barr said of the briefing.

Earlier this week, former FBI general counsel James Baker said he and other officials were "quite worried" that it could look like Comey was trying to blackmail Trump when he first told him about the allegations in the dossier. Baker, on an episode of Yahoo News podcast "Skullduggery," said that "analogies" were made to J. Edgar Hoover--the former FBI director who famously abused his power to blackmail individuals.

"We were quite worried about the Hoover analogies, and we were determined not to have such a disaster happen on our watch,” Baker said, hoping to convey to the incoming president that they did not want to continue the "legacy" of Hoover's blackmailing.

Baker did not recall the moment he first heard about the Steele dossier but remembered the bureau taking it "seriously" and said they were "obligated to deal with it" and determine whether anything about it was true, but insisted they didn't accept it "as gospel." He did, however, believe Trump had to be briefed on the dossier because it was "about to be disclosed to the press."

As for the dossier itself, Barr said he is “not sure what role it played,” but it is part of the review.

“It’s a very unusual situation to have opposition research like that, especially one that, on its face, had a number of clear mistakes and in a somewhat jejune analysis,” Barr said. “And to, and to use that, take it to conduct counterintelligence against an American political campaign is a strange—would be a strange development.”

With Special Counsel Robert Mueller's report now complete, the attorney general has opened a new phase by pursuing a formal review into the conduct of the original investigation. Earlier this week, it was revealed that Barr had appointed Durham, the U.S. attorney from Connecticut, to lead that investigation -- to cover “all intelligence collection activities” related to the Trump campaign during the 2016 presidential election and any misconduct during the early stages of the FBI’s original Russia probe.

He is expected to focus on the period before Nov. 7, 2016—including the use of FBI informants as well as alleged improper issuance of Foreign Intelligence Surveillance Act (FISA) warrants.