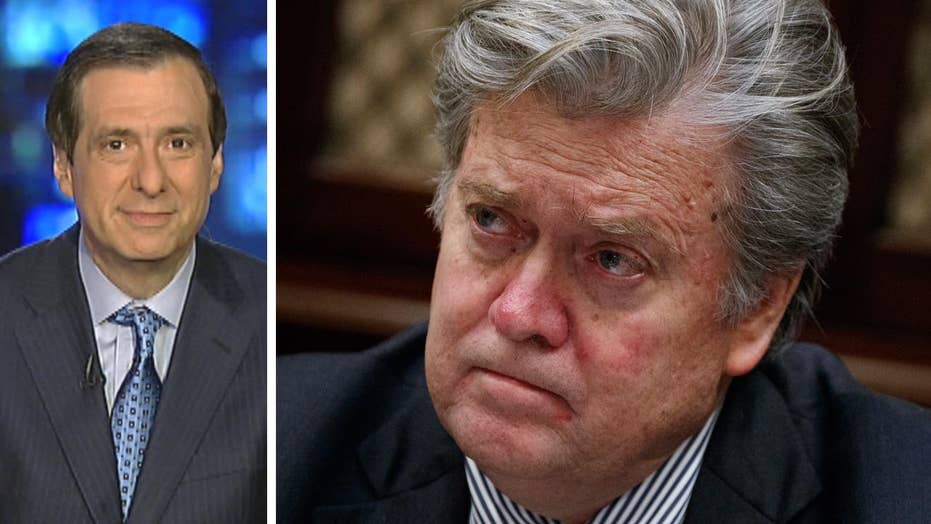 Kurtz: The bullseye on Steve Bannon

I don’t know whether Steve Bannon has a long-term future in the White House, but I do know this:

The press wants him out.

There has been an almost obsessive focus with the fate of President Trump’s chief strategist, and the tone of the stories about the internal battles is unmistakable.

And the Kushner faction, which includes a couple of Wall Street veterans, happens to favor the kind of compromises that most journalists want.

As an added bonus, Bannon has made no secret of his loathing for the press. So there’s an element of payback here as well.

I’m not minimizing the importance of these battles. Since Trump is not a fiercely ideological leader, the voices he listens to may well shape the future of his administration.

But there is a tendency in some media quarters to depict the combative Bannon as a Svengali who is pulling the president’s strings. The reality is that Trump was sounding nationalist themes, especially on trade and economic issues, decades ago. The reality is that Bannon joined the campaign for the final 2-1/2 months.

That is not to minimize his importance as a force in the White House. Trump respects Bannon as a former Goldman Sachs executive and Hollywood entrepreneur who made his own fortune. But Trump is at heart a dealmaker who prides himself on flexibility.

It’s also true that the president wants to be the star of his own show. Bannon hasn’t exactly sought a high profile, passing up every television interview request since he joined the campaign. But the Time magazine cover on him—“The Great Manipulator”—didn’t please the boss.

The infighting, waged through constant leaks to the press, is all too real and goes well beyond Bannon. But the friction between Bannon and Kushner reached the point where Trump told them to work things out, or he would do it for them. And a son-in-law tends not to lose that kind of battle.

A couple of presidential interviews this week have fueled the notion that Bannon is on thin ice. Trump told the Wall Street Journal that Bannon is “a guy who works for me.”

And the president said this to New York Post columnist Michael Goodwin: “I like Steve, but you have to remember he was not involved in my campaign until very late. I had already beaten all the senators and all the governors, and I didn’t know Steve. I’m my own strategist.”

To me, that’s a bit of a brushback pitch to remind Bannon that hey, he’s staff, and that it was Trump that got Trump elected.

But the Washington Post says Bannon has been “publicly humiliated by his boss.”

The paper called him “a marked man,” and then used this medical metaphor:

“The president’s comments were described by White House officials as a dressing-down and warning shot, though one Bannon friend, reflecting on them Wednesday, likened Bannon to a terminally ill family member who had been moved into hospice care.”

There were also leaked and damaging assessments in the New York Times, which said Bannon is keeping a low profile due to his “isolation inside the White House,” with aides describing Trump’s “growing irritation” with all the credit he is getting.

And this zinger, quoting a source as saying Trump has described Bannon as “not a team player.”

But for all the journalistic drama, both papers get around to acknowledging that nothing may change.

The Post: “For now, at least, Bannon may survive the turmoil.”

The Times: “One person with firsthand knowledge of internal White House dynamics…insisted that no immediate changes were likely.”

Bannon is a symbol. To many Trump supporters, he represents the defiant, revolutionary conservatism they want from the president. To many Trump detractors, and many media types, he represents an undisciplined, extremist ideology--a pirate, in Newt Gingrich's word. It's still unclear whether he'll ultimately have to walk the plank.