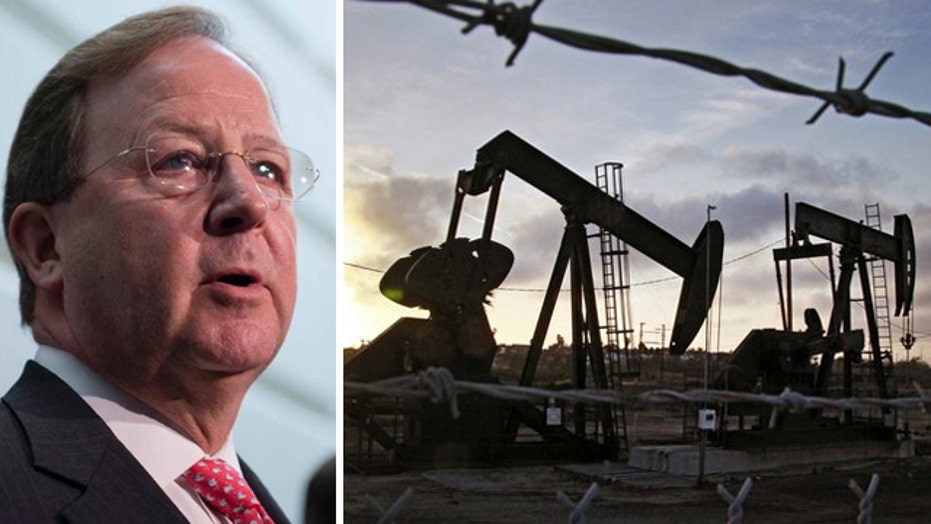 Congressional Republicans are leading a bipartisan effort to lift a decades-old ban on oil exports, arguing the recent surge in domestic-energy production and other factors have pushed the embargo past its prime.

To be sure, the United States has recently emerged as the world’s largest energy producer -- largely the result of the relatively new method of extracting natural gas and hard-to-get oil known as “fracking.”

Supporters of the plan, including many in the oil and gas industry, essentially argue that lifting the ban would help the U.S. economy. They say it is now slowing future energy production and exploration and that U.S. companies could profit from getting an abundance of domestic energy products on world markets.

“I’m optimistic about our efforts,” North Dakota GOP Rep. Kevin Cramer told FoxNews.com on Wednesday. “We have bipartisan support and a broad understanding of the issue among members.”

He touts the legislation as a potential boon for the U.S. economy. And he prefers a measured approach to passage, amid urgent calls to immediately repeal the ban in the wake of the Iran nuclear pact, fearing that strategy will become a political football like the Keystone XL Pipeline, not the “jobs creator” he wants it to be.

Cramer and other supporters also argue that lifting the ban would result in cheaper electricity, which would spark growth in U.S. manufacturing and other sectors of the economy, beyond the oil and gas industry.

In addition, they argue, the so-called “light sweet” or “sweet” oil derived from fracking and the companion horizontal-drilling process cannot be readily processed by U.S. refineries but is exceptionally valuable overseas.

“It’s a premium product,” said Cramer, who is co-sponsoring bills by Texas Republican Reps. Joe Barton and Mike McCaul that combined have at least 10 Democratic co-sponsors.

However, calls to lift the ban, the result of the 1970’s energy crisis, have also brought out critics. And they have resulted in conflicting reports about the potential impact of adding billions of barrels of U.S. crude oil to world markets -- from gas prices increasing at pumps across the county to oil prices plummeting around the globe to the reaction from the 12-nation Organization of the Petroleum Exporting Countries (OPEC).

“Pro-ban supports would like to make it cut and dry, but it’s a very complicated issue,” Jay Hauck, executive director of the CRUDE coalition, said Friday. “It’s an onion, and you have to peel away the layers.”

The group, whose full name is Consumers and Refiners United for Domestic Energy, represents U.S. energy companies and advocates for keeping crude in the country.

Hauck argues the U.S. is indeed now the world’s biggest energy producer but has yet to achieve total energy independence, which means exporting would result in billions of barrels more annually from foreign countries, posing a greater national security risk.

One of the biggest critics of lifting the ban is Navy Cmdr. Kirk Lippold, who was in charge of the USS Cole in 2000 when terrorists attached and detonated a bomb on the destroyer at a Yemen port, killing 17 American sailors.

Lippold testified at a recent House hearing on the issue that the biggest benefactor of U.S. exports would be rival China.

In the Senate, Sen. Lisa Murkowski, an Alaska Republican and chairwoman of the Senate Committee on Energy and Natural Resources, is helping lead efforts to lift the ban.

She was among those sending early-warning signals about the Iran nuclear deal allowing the oil rich country to put 1 million barrels daily on the world market.

“We are letting Iran export its oil to markets that we prevent our own companies from accessing,” Murkowski said in late June. “Any deal that lifts sanctions on Iranian oil will disadvantage American companies unless we lift the antiquated ban on our own oil exports."

And Murkowski’s committee held a hearing June 9 on a bill that she and Sen. Heidi Heitkamp, North Dakota Democrat, have co-sponsored on lifting the ban.

However, a top Senate staff told FoxNews.com after the Iran deal was struck Tuesday that Murkowski has no intentions of holding up a major foreign policy vote or international trade legislation over lifting the ban, likely references to the Trans-Pacific Partnership pact being debated in Congress and the upcoming votes on the Iran nuclear deal.

(The staffer made the comments after a House effort to insert ban-lifting language into the trade pact went nowhere.)

Energy Secretary Ernest Moniz said this spring that he doesn’t think “an overly compelling argument has been made” to lift the ban while the U.S. continues to import 7 million barrels of crude oil daily.

However, the issue is being handled by the Commerce Department, not the Energy Department. And Moniz made clear he was not making a statement “in support of or against the idea of exports.”

Hauck said the companies that his group represents are not "absolutely, under-no-circumstances opposed" to lifting the ban if the U.S. becomes totally energy independent and it were proven that consumers and refiners would not be harmed.

Cramer says the House bills, including the third from Texas GOP Rep. Mike Conaway, could be combined or become an amendment to a large bill.

And he sees possibility in the fact that the White House has never threatened to veto such legislation.