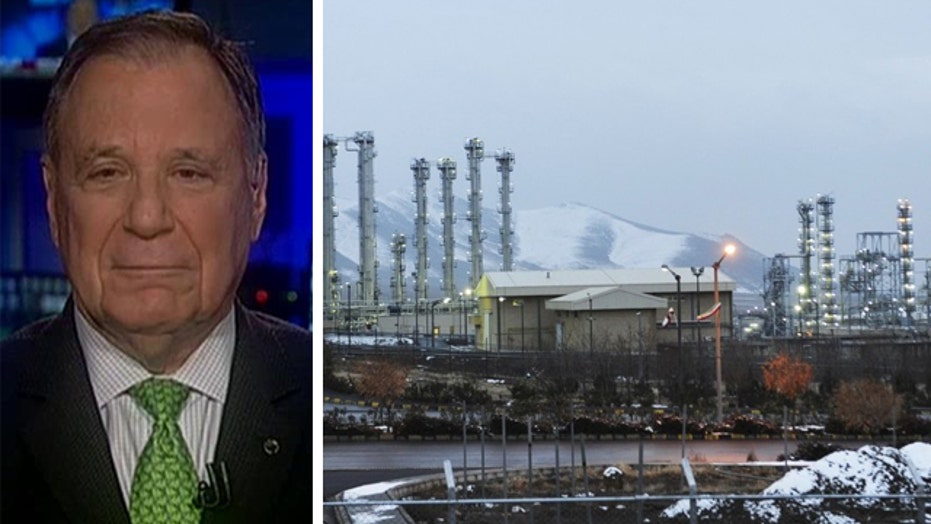 The international negotiations to strike a nuclear agreement with Iran intensified and took on a frantic tone Saturday, as France and Germany joined in the talks that have recently been limited to the United States and Tehran.

The negotiators are trying to reach an outline of an agreement by Tuesday, toward a final agreement by June 30 that would end Iran’s pursuit of a nuclear weapon.

Secretary of State John Kerry and the other negotiators have met multiple times this weekend in various formats in the Swiss town of Lausanne.

“The serious but difficult work continues,” a senior State Department official said. “We expect the pace to intensify as we assess if an understanding is possible.”

In another nod to the fast-approaching deadline, Iranian President Hassan Rouhani spoke by phone with German Chancellor Angela Merkel to emphasize the importance of reaching an agreement.

Iranian negotiator Majid Takht-e Ravanchi denied a news report that the sides were close to agreement on a text, and other officials spoke of remaining obstacles, including Iranian resistance to limits on research and development and demands for more speedy and broad relief from international sanctions.

French Foreign Minister Laurent Fabius told reporters as he arrived that the talks have been "long and difficult.”

“We've advanced on certain issues, not yet enough on others," he said.

Iranian Foreign Minister Mohammad Javad Zarif, meanwhile, suggested the blame for any impasses lies with the U.S. and its partners.

"In negotiations, both sides must show flexibility," he wrote on Twitter. "We have and are ready to make a good deal for all. We await our counterparts' readiness."

Iranian nuclear agency chief Ali Akbar Salehi described one or two issues as becoming "twisted." He told Iran's ISNA news agency that the sides were working to resolve the difficulties.

Kerry met early in the day with Zarif, before extended sessions with Fabius and Germany's Frank-Walter Steinmeier. The foreign ministers of Russia, China and Britain also were expected in Lausanne on Sunday.

"We now are standing at the threshold of a political resolution and a collective political impulse,” said Russian deputy Foreign Minister Sergei Ryabkov. “I think these chances (of an agreement) significantly exceed 50 percent."

But the diplomats also said their presence does not necessarily mean a deal is almost done.

Steinmeier avoided predictions of an outcome, saying only that a nuclear deal could help ease Mideast tensions.

"These are decisive days before us after 10 years, nearly 12 years, of negotiations with Iran," he told reporters. "The endgame of the long negotiations has begun. ... The final meters are the most difficult but also the decisive ones. ... I can only hope that in view of what has been achieved over the last 12 months that the attempt for a final agreement here will not be abandoned."

He also said that a successful conclusion of the nuclear talks with Iran "could perhaps bring a bit more calm to the region."

Iran says its nuclear ambitions are purely peaceful; other nations fear it is seeking to develop weapons.

Republicans in Congress and other critics of the Obama administration’s foreign policy fear the United States will agree to any deal, in an attempt to end years of negotiations.

The GOP-led Senate has pushed an effort to give Congress a vote on a final deal and has tried to impose additional sanctions on Iran, a strategy the White House has essentially rejected as a deal-breaker.

Progress has been made on the main issue: The future of Iran's uranium enrichment program. It can produce material for energy, science and medicine but also for the fissile core of a nuclear weapon.

The sides tentatively have agreed that Iran would run no more than 6,000 centrifuges at its main enrichment site for at least 10 years, with slowly easing restrictions over the next five years on that program and others Tehran could use to make a bomb.

Officials have told The Associated Press that the U.S. may allow Iran to run hundreds of centrifuges at the Fordo bunker in exchange for limits on centrifuge work and research and development at other sites. The Iranians would not be allowed to do work that could lead to an atomic bomb and the site would be subject to international inspections.

Instead of uranium, any centrifuges permitted at Fordo would be fed elements used in medicine, industry or science, the officials said.

Even if the centrifuges were converted to enrich uranium, there would not be enough of them to produce the amount needed to make a weapon within a year -- the minimum time frame that Washington and its negotiating partners demand.

A nearly finished nuclear reactor would be re-engineered to produce much less plutonium than originally envisaged.

Still problematic is Iran's research and development program. Tehran would like fewer constraints on developing advanced centrifuges than the U.S. is willing to grant.

Also in dispute is the fate of economic penalties against Iran. Additionally, questions persist about how Iran's compliance with an agreement would be monitored.

Fabius said France was not yet satisfied on that point.

Fox News’ Wes Barrett and The Associated Press have contributed to this report.