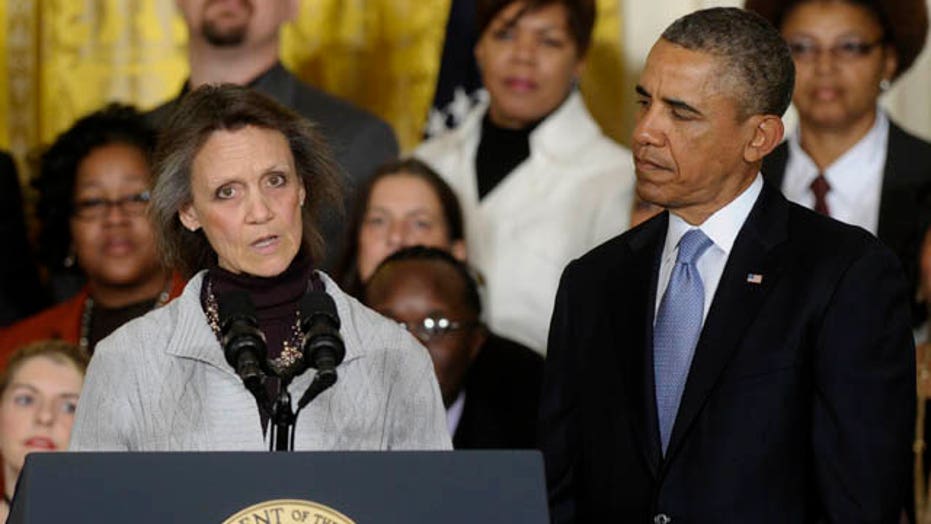 Jobless benefits push an admission of failure by Obama?

White House claims US economy is recovering, but says need for unemployment insurance is an emergency

The emerging debate about income inequality has a visceral appeal for the media—and plenty of pitfalls.

The Democrats are also pushing it in part to score political points—and the coverage has to recognize that as well.

With President Obama preparing some anti-poverty proposals and six Senate Republicans helping the Democrats win a procedural vote on extending long-term unemployment benefits, the argument over haves and have-nots is suddenly grabbing the capital spotlight. That this is unfolding on the 50th anniversary of LBJ’s War on Poverty gives it a nice historical sheen.

But the press needs to be careful here.

Most journalists have a natural instinct to side with the downtrodden. If the federal minimum wage of $7.25 is too low, that’s because it is the one benefit program that isn’t indexed to inflation, forcing Congress to fight these battles every few years. Thirteen states are raising the minimum wage higher this year. But reporters have to consider the argument that boosting the benchmark too high could discourage small businesses from hiring.

The 1.3 million people who have been jobless so long they have run out of benefits is a national tragedy. But here too, there’s a more subtle argument: how do you pay for extending those benefits—at a cost of $25 billion a year--and at what point do these “emergency” extensions run out?

I suspect a deal will get worked out for a short-term extension, but there’s a deeper ideological divide as well. Rand Paul says it’s a “disservice” to the jobless to keep extending benefits beyond a certain period because it kills the incentive to look for work. Chuck Schumer, on ABC’s “This Week,” called that “insulting” because the recipients had worked their whole lives and continue to hunt for jobs.

At the White House, surrounded by a group of unemployed people, President Obama called extended jobless benefits a “vital economic lifeline…These aren’t folks who are just sitting back waiting for things to happen…They desperately want work…These are your neighbors, your friends, your family members.” The president dismissed the notion that insurance “saps their motivation” or that the recipients are “lazy,” blaming the financial crisis he inherited from George W. Bush.

So given the natural sympathies involved, does the left/right way that the media frame most political battles help the Dems? As the Washington Post puts it:

“Democrats plan to push to increase the federal minimum wage, part of an effort to make income inequality a midterm campaign theme. Republicans are likely to resist an increase, but party leaders also face political pressure from vulnerable incumbents to demonstrate more compassion for the poor after back-to-back presidential election losses.”

But the GOP isn’t being passive. As the Post points out, Marco Rubio will give a speech today on proposed changes to anti-poverty programs, and Paul Ryan will discuss the issue with NBC’s Brian Williams on Thursday.

By the way, as Chris Cillizza points out, “Between 2009 and early 2013, the share of Republicans who said the federal government should decrease spending to assist the unemployed has more than doubled from 26 to 56 percent,” according to Pew.

With an anemic recovery and so many people hurting, there is no shortage of angles. The New York Times finds a new one:

“Persistent high unemployment among young people is adding up to $25 billion a year in uncollected taxes and, to a much smaller degree, increased safety net expenditures, a new report says.”

Obviously it’s news when a president and one party in Congress push a set of issues in a midterm election year. But since this debate takes the focus off ObamaCare, the question lingers: Are the media merely reporting this push or getting behind it?

This was an eye-opener on Mediaite:

“My given name is Zachary Hildreth, but most people in the media world know me as Jon Nicosia. I am currently the managing editor of Mediaite.com. I am also a convicted felon.”

At a data company he founded, “ I could not accept that the company I worked so hard to create was failing, so I rationalized doing things that were both unethical and illegal. Until that point, I had never gotten so much as a speeding ticket. Then, to my disbelief, I was arrested. My ‘whiz kid’ hubris even led me to refuse a plea deal that would have gotten me a one-year sentence. I paid the price with a lengthy trial that was covered by both local and national media. I was eventually convicted of multiple counts of bank fraud and larceny for which I served five years in state prison.”

Hildreth says he disclosed his criminal history to Mediaite when he was hired. “I have certainly tried to keep much of my past behind me, but for years people have been asking questions — and rightfully so.”