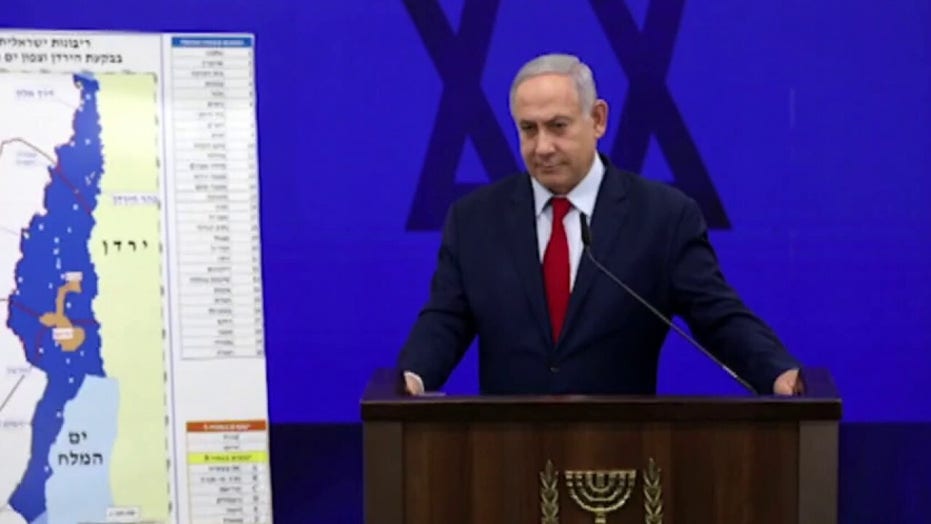 New York Rep. Alexandria Ocasio-Cortez and several other top Democrat lawmakers sent a letter to Secretary of State Mike Pompeo on Tuesday warning of severe consequences for Israel if it continues its plan to annex part of the disputed West Bank -- and the document touted support from organizations that have called for boycotting Israel entirely.

The Washington Free Beacon and other outlets obtained a copy of Ocasio-Cortez's letter, which was also signed by Sen. Bernie Sanders, I-Vt., and Rep. Rashida Tlaib, D-Mich. It warns that Israel's planned move "would lay the groundwork for Israel becoming an apartheid state," and threatens to cut off U.S. security assistance to Israel.

“Should the Israeli government continue down this path, we will work to ensure non-recognition of annexed territories as well as pursue legislation that conditions the $3.8 billion in U.S. military funding to Israel to ensure that U.S. taxpayers are not supporting annexation in any way," the letter reads. “We will include human rights conditions and the withholding of funds for the offshore procurement of Israeli weapons equal to or exceeding the amount the Israeli government spends annually to fund settlements, as well as the policies and practices that sustain and enable them.”

The document states that it has the support of a series of anti-Israel groups, including leaders of the Boycott, Divestment and Sanctions (BDS) movement against Israel. For example, one backer, American Muslims for Palestine (AMP), is a nonprofit that explicitly calls for boycotting Israel until it complies with what the group calls its "human rights" obligations.

At the same time, AMP claims to be nondiscriminatory, saying it condemns "all forms of racism and bigotry, including Islamophobia, anti-black racism, anti-immigrants, anti-Semitism, and other forms of bigotry directed particularly toward people of color and indigenous peoples everywhere."

The letter also has the support of the pro-BDS U.S. Campaign for Palestinian Rights, which Tablet magazine reported is "help[ing] facilitate tax-exempt donations to a Palestinian coalition that includes Hamas, Palestinian Islamic Jihad, the Popular Front for the Liberation of Palestine, and other groups the U.S. State Department designates as terrorist organizations."

The New York Post noted that another signatory to the letter, the Defense for Children International -- Palestine, once also faced accusations of "having ties to the Popular Front for the Liberation of Palestine, a US- and European Union-designated terrorist organization."

Meanwhile, a confidant of Prime Minister Benjamin Netanyahu confirmed that the Israeli leader's plan to annex parts of the occupied West Bank would not start on Wednesday, the original target date, as the British prime minister made an extraordinary appeal to Israel to call off the plan.

The developments cast further uncertainty over whether Israel will ultimately follow through on the explosive annexation initiative, which has drawn fierce international condemnations from some of Israel's closest allies.

Palestinians demonstrate against Israeli plans for the annexation of parts of the West Bank, in Gaza City, Wednesday, July 1, 2020. (AP Photo/Khalil Hamra)

Speaking on Israel's Army Radio station, Cabinet minister Ofir Akunis confirmed that the annexation process would not begin on Wednesday, saying that officials were still working out the final details with their American counterparts. He said he expected the annexation to take place later in July.

“Coordination with the American administration is not something that can be dismissed,” he said.

Netanyahu had aimed to start the process by Wednesday, saying he wants to begin annexing West Bank territory in line with President Donald Trump’s Mideast plan.

The Prime Minister’s Office issued a statement saying Netanyahu held discussions Wednesday with American diplomats and Israeli defense officials on the issue of annexation, and that “additional discussions will be be held in the coming days.”

The plan, unveiled in January, envisions bringing some 30 percent of the territory under permanent Israeli control, while giving the Palestinians limited autonomy in carved-up pockets of the remaining land.

But the plan has come under stiff international criticism. The United Nations, the European Union and key Arab countries have all said Israel's annexation would violate international law and undermine the already diminished prospects of establishing a viable independent Palestinian state alongside Israel. Even close allies, like Britain, have opposed it.

In a front-page article in the Yediot Ahronot daily, one of Israel's largest newspapers, British Prime Minister Boris Johnson wrote that as a “passionate defender of Israel," he was particularly troubled by its intentions. He noted his long links to Israel, dating back to when volunteered on a kibbutz as an 18-year-old and his “many visits” since then.

A Palestinian woman flashes the victory sign as she demonstrates against Israeli plans for the annexation of parts of the West Bank, in Gaza City, Wednesday, July 1, 2020. (AP Photo/Khalil Hamra)

“As a life-long friend, admirer and supporter of Israel, I am fearful that these proposals will fail in their objective of securing Israel’s borders and will be contrary to Israel’s own long-term interests,” Johnson wrote, adding that annexation “would put in jeopardy” the gains Israel has made in recent years in improving relations with the Arab world.

“I profoundly hope that annexation does not go ahead. If it does, the UK will not recognize any changes to the 1967 lines, except those agreed between both parties,” he said.

Israel captured the West Bank from Jordan in the 1967 Mideast war. The international community considers the territory occupied land, and Israel’s more than 120 settlements there illegal. The Palestinians, who seek all of the West Bank as part of a future state, have rejected the Trump plan.

Several thousand Palestinians marched in Gaza City for a “day of rage” on Wednesday to protest the annexation plans, one of several demonstrations that were expected in Palestinian areas. The protesters waved Palestinian flags and held signs calling the plan a “declaration of war” on the Palestinian people. The rally ended peacefully by the early afternoon.

While building scores of settlements that are now home to nearly 500,000 Israelis, Israel has never tried to annex West Bank territory before, saying the area is “disputed” and that its final status should be settled through negotiations. The international community considers the area occupied and its settlements to be illegal.

Palestinian Muslim clerics attend a demonstration against Israeli plans for the annexation of parts of the West Bank, in Gaza City, Wednesday, July 1, 2020. (AP Photo/Khalil Hamra)

Netanyahu has defended his annexation plan on both security and religious grounds and says the friendly Trump administration has provided a rare opportunity to redraw Israel's borders. He is eager to move forward before November's U.S. presidential election, especially with Trump's re-election prospects in question, and made sure that the coalition agreement for his new government included the July 1 date for him to introduce a plan to parliament.

But beyond the international opposition, Netanyahu has encountered some resistance from his Blue and White governing partners. Blue and White's leader, Defense Minister Benny Gantz, this week said Wednesday's target date was not “sacred” and suggested that annexation can wait while the government grapples with Israel's coronavirus crisis.

U.S. officials have said they do not want to move forward with a plan unless the two leaders are in agreement. Israeli media also reported that Israel is seeking changes in a proposed U.S. map for annexation, and that American officials are demanding an Israeli gesture to the Palestinians as compensation for any annexation that takes place.

Dovish Israeli groups have been holding street protests against the annexation plan and it has also encountered surprising opposition from some of the West Bank settlers themselves, who fear having to recognize a de facto Palestinian state and find themselves engulfed in isolated enclaves.

The majority of them, however, are pressuring Netanyahu to follow through, launching a campaign titled, "you made a promise — keep it.”