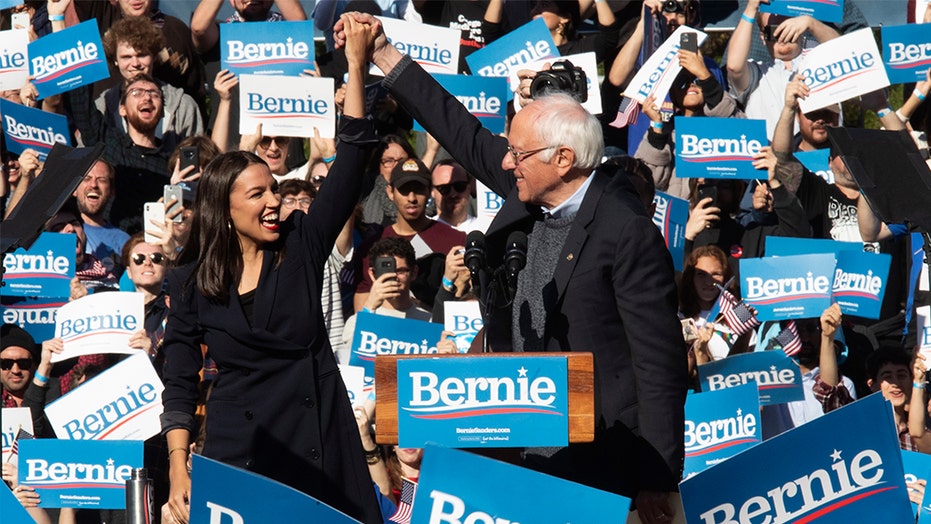 With Bernie Sanders tied up in Washington at President Trump's Senate impeachment trial, a couple of his high-profie supporters filled in for him Friday at a campaign rally in Iowa.

Rep. Alexandria Ocasio-Cortez, D-N.Y., and liberal filmmaker Michael Moore shared the duties for the 2020 presidential candidate in Iowa City. But in her speech closing out the event, Ocasio-Cortez -- who first endorsed Sanders back in October -- never once mentioned his name.

The Iowa rally -- in the home city of the University of Iowa -- was held one day after Sanders faced backlash from many Democrats after tweeting support for controversial podcast host Joe Rogan.

After several other guests spoke, Moore stepped up to the podium and began incessantly praising Sanders, an independent U.S. senator from Vermont. Moore claimed that watching Sanders on the campaign trail has made him cry.

“I’m so excited about our possibilities here. Right here in Iowa," Moore said. "Bernie was in Dubuque a couple of weeks ago and I scribbled this down here – I came to tears watching him say this.”

“It was a Q-and-A at a big town hall and someone asked him if he thought he was too old to be president of the United States [and Bernie said] 'I’ve been saying for months, I’ll tell you what’s too old -- 40 million people in this country not having health care. That’s too old.’”

Moore championed Sanders for his policies on climate change, the minimum wage and his record on civil rights, before claiming Sanders is the only candidate who can defeat President Trump in November.

At the end of his speech, Moore introduced Ocasio-Cortez and said she had "inspired" Sanders' second run for the White House.

When Ocasio-Cortez got to the stage, however, she alluded to Sanders but didn't mention his name once.

Instead, she echoed Moore's call to take a risk and said voters shouldn't settle for the status quo.

“It is bold and it is a risk,” she said. “We hedge our bets, we get more of the same. And the same has not been helping. So our job right now is to come together ...We’ve got ten days left, ten days (until the Iowa caucuses on Feb. 3)."

The New York Democrat also called for the abolition of two federal immigration agencies -- Immigration and Customs Enforcement (ICE) and Customs and Border Protection (CBP). She also advocated for Medicare-for-all, and suggested that political leaders craft the nation's environmental policy around "indigenous wisdom."

“This is not just about how we win, it’s about how we heal," Ocasio-Cortez added. "From our bodies to this land, we are going to need entirely new paradigms of public policy in order to heal."

Earlier, Sanders had called in to the rally via phone and encouraged voters to support him in the upcoming caucuses.

The self-described democratic socialist then thanked Ocasio-Cortez and Moore before launching into a list of reasons why he believes he'll win the Democratic presidential nomination.

"We are going to win because we are developing an unprecedented multigenerational, multiracial, working-class movement which is prepared to take on the corporate elite and the entire One Percent and put together an administration that stands for justice," he said. "Economic justice, social justice, racial justice, and environmental justice."

"The time is long overdue for us to have a government an economy that works for all of us," he added. "Not just the One Percent."