"This week, the second sexual assault allegation and the sixth harassment allegation was leveled against Governor Cuomo," Ocasio-Cortez and Rep. Jamaal Bowman, D-N.Y., said in a statement. "The fact that this latest report was so recent is alarming, and it raises concerns about the present safety and well-being of the administration’s staff. These allegations have all been consistent and highly-detailed, and there are also credible media reports substantiating their accounts."

A defiant Cuomo addressed the allegations during a press call on Friday afternoon, insisting he would not resign. "I did not do what has been alleged," he said.

The lawmakers spoke after the Albany Times Union reported that a woman said Cuomo aggressively groped her at the executive mansion after summoning her there to help him with a cellphone issue. Cuomo is alleged to have reached under her blouse, according to the paper.

Cuomo has denied the accusation, saying on Wednesday: "I have never done anything like this."

It was the sixth woman to come forward with allegations against Cuomo, and it is the latest in a cavalcade of accusations facing the governor, whose popularity soared in mid-2020 amid news conferences in which he presented a calm face in the early days of the coronavirus pandemic -- going on to release a book about "leadership lessons."

But he has for months been dodging scrutiny over his handling of the virus in nursing homes, particularly an order that demanded nursing homes take in COVID-positive patients. The state attorney general issued a report earlier this year that estimated that deaths had been undercounted by as much as 50 percent.

In recent weeks, that scandal has been eclipsed by the onslaught of claims of harassment and outright assault. The state AG, Letitia James, is investigating the allegations that range from accusations of inappropriate remarks and questioning to unwanted advances and groping.

Last month, Cuomo apologized for interactions that he said "may have been insensitive or too personal and that some of my comments, given my position, made others feel in ways I never intended." However, he denied inappropriately touching anyone.

But a growing number of Democrats have called for Cuomo to step down. In addition to Ocasio-Cortez, Bowman and Nadler, Reps. Nydia Velazquez, Grace Meng, Sean Patrick Maloney and Carolyn Maloney, also called for him to step down. 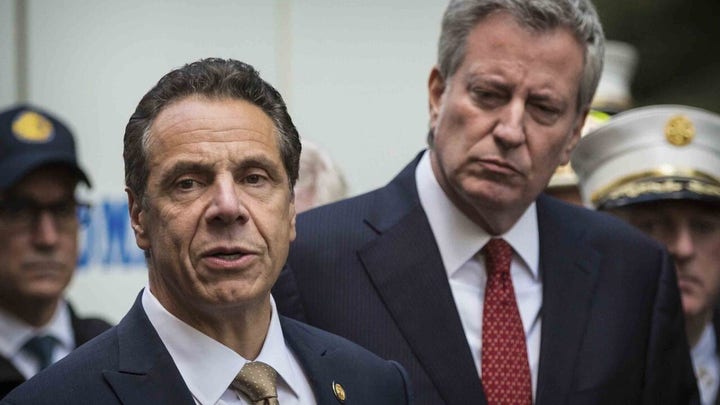 "Unfortunately, the Governor is not only facing the accusation that he engaged in a pattern of sexual harassment and assault. There is also the extensive report from the Attorney General that found the Cuomo administration hid data on COVID-19 nursing home deaths from both the public and the state legislature," the statement from Ocasio-Cortez and Bowman said.

Nadler, meanwhile, called the accusations "credible" and "serious." He said that while Cuomo is guaranteed due process, "the question before us is squarely a political judgment."

"The governor must resign. He can no longer do the job," he said, before urging him to "do something that's decent after these many many indecent revelations and simply resign."

Their statements come a day after the New York State Assembly on Thursday initiated what's seen as the first step to impeaching the governor when they opened an investigation with full subpoena power.

"The Democratic Conference is taking the first step toward impeachment by opening an investigation with full subpoena power to obtain facts and testimonies under oath," Democratic Assemblyman Ron Kim said in a statement obtained by Fox News on Thursday.

Dozens of Democratic members of the state Assembly and Senate issued a joint statement on Thursday calling for Cuomo to resign due to the two scandals.

The lawmakers, 59 in total, said that they must "decide what is best for the future of New York State," as the twin controversies have hurt Cuomo's standing and have left him "ineffective" as the state deals with health and economic crises.

"The budget, the fight against COVID-19, and restarting the economy all demand clear and trustworthy leadership," the statement read. "In light of the Governor's admission of inappropriate behavior and the findings of altered data on nursing home COVID-19 deaths he has lost the confidence of the public and the state legislature, rendering him ineffective in this time of most urgent need."

Cuomo reiterated Sunday afternoon that he will not resign until James completes her investigation.