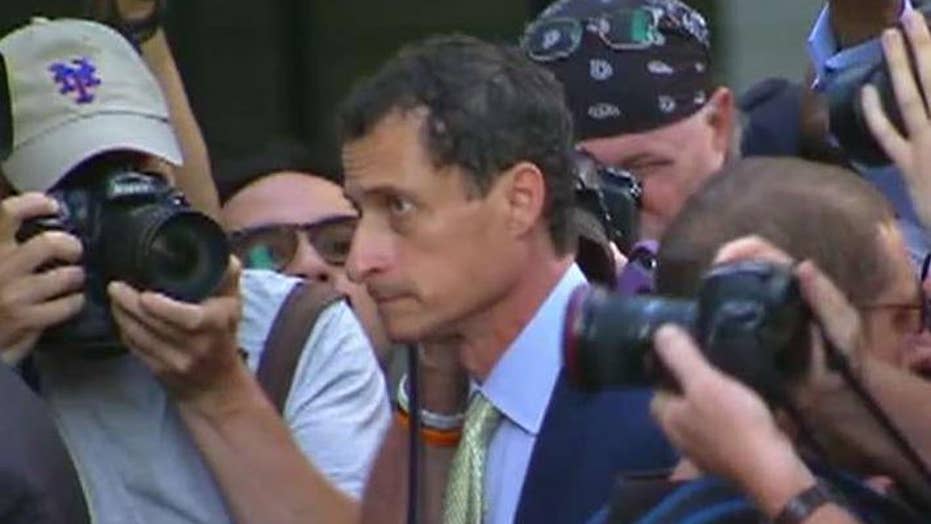 Former Rep. Anthony Weiner rose to fame with an impassioned speech in Congress in 2010, only to be taken down by a scandal that involved "sexting" multiple women for years.

The former New York Democratic congressman reported to prison in November 2017 after he was sentenced to 21 months in prison two months before on federal charges of sending sexually explicit messages to a teenage girl.

As he serves his time, Weiner and his estranged wife Huma Abedin proceeded with their divorce, opting on Wednesday to withdraw their case so they can settle it out of court.

Weiner, who openly wept as the judge read his sentencing in September, was also ordered to register as a sex offender.

A 15-year-old girl in North Carolina told the Daily Mail in 2016 that she and Weiner exchanged explicit messages for months. She claimed that he asked her to film herself undressing at one point.

Prior to sentencing, Weiner agreed to not appeal any sentence between 21 and 27 months in prison. He had faced up to 10 years in prison for the charge of  transferring obscene material to a minor.

From his start as a politician and marrying political staffer Huma Abedin, to the first reports of his "sexting" scandal, here's a look at Weiner's time in the spotlight.

Weiner and Abedin, who met in 2001, got married in New York. Former President Bill Clinton officiated the ceremony.

That same month, Weiner, who was a Democratic representative at the time, gave a moving speech on the House floor after a bill to provide aid to 9/11 emergency responders failed. Weiner gained notoriety and soon started becoming a known name in the political world.

The first photo of the scandal: a picture of Weiner in his boxer brief with a bulging crotch was posted on his Twitter account with about 40,000 followers. Weiner first claimed his Twitter was hacked.

Abedin was secretly pregnant with their son at the time.

Weiner held a tearful news conference on June 6, fessing up to the tweet.

"To be clear, the picture was of me, and I sent it," Weiner said.

Weiner announced he would be taking a leave of absence from Congress on June 11. A spokeswoman said Weiner was taking the time to "seek professional treatment to focus on becoming a better husband and healthier person."

Five days later, he officially resigned from Congress. He held a news conference in Brooklyn, New York and apologized for his actions and the embarrassment he may have caused.

After being out of the public eye for nearly two years, Weiner announced he was running for mayor of New York City. In the video announcement, Weiner, Abedin and their son appear to be a happy family, putting the scandal behind them.

"Look, I’ve made some big mistakes and I know I’ve let a lot of people down," Weiner said in the video.

"I'm running for mayor because I've been fighting for the middle class and those struggling to make it for my entire life. And I hope I get a second chance to work for you," he added.

"We love this city," Abedin said. "And no one will work harder to make it better than Anthony."

A website published screenshots of alleged conversations that contained explicit photos between Weiner and another woman.

Weiner, with Abedin by his side, held a news conference on July 23 where he admitted to the sexting. Despite the revelation, Abedin stood by her husband's side.

"What I want to say is I love him, I have forgiven him, I believe in him, and as I have said from the beginning, we are moving forward," Abedin said.

Weiner lost the mayoral primary, landing in fifth place. Bill de Blasio went on to win the Democratic nomination and the election.

The documentary "Weiner" opened in theaters. The film documents Weiner's rollercoaster career in politics and highlighted the scandal. Abedin, at the time, was one of Hillary Clinton's top campaign aides for the 2016 presidential election.

The New York Post published a story about more explicit texts the disgraced politician sent starting in 2015. One of the photos showed Weiner, in his boxer briefs, in bed with his toddler son by his side.

The next day, Abedin announced the couple was separating.

"After a long and painful consideration and work on my marriage, I have made the decision to separate from my husband," Abedin said in a statement.

The Federal Bureau of Investigation and the New York Police department announced they were opening an investigation into Weiner after a 15-year-old girl told the Daily Mail the former politician sent her lewd messages starting in January 2016. The exchange continued for months.

Weiner appeared in federal court in Manhattan on May 19 and pleaded guilty to a charge of transmitting sexual material to a minor.

"I have a sickness, but I do not have an excuse," Weiner tearfully said during his apology in court.

The judge told him he would have to register as a sex offender. Weiner agreed to not appeal any sentence between 21 and 27 months in prison.

On the same day, Abedin reportedly filed for divorce, nine months after announcing their separation.

Weiner was sentenced to 21 months in prison after his lawyers argued he should be spared from prison in a Manhattan federal court. He openly wept in court as the judge said he was also sentenced to three years of supervised release, ordered to pay a $10,000 fine and required to forfeit his iPhone. His lawyers referenced letters that attest to his character, including one by Abedin.

“With Anthony, I have repeatedly found myself in circumstances I never imagined. I am devastated by Anthony’s actions, and I understand he must face their consequences,” she said.

His lawyers referenced “Anthony’s operatic self-destruction,” describing his crime as “the final act … born of deep sickness.” But they also blamed the girl who Weiner conversed with, saying that she had a goal to affect last year’s presidential election as Abedin worked for Clinton.

Weiner’s lawyers also argued that he never purposefully sought out teenagers on the internet and didn’t engage in predatory behaviors.

“He responded to the victim’s request for sexually explicit messages not because she was a teenager but in spite of it,” the lawyers said.

The couple also asked a judge for privacy in their separate divorce proceedings. While their lawyers met with state Supreme Court Justice Michael L. Katz, Weiner and Abedin chatted casually, according to the Associated Press.

A conservative watchdog group said the FBI found about 2,800 government documents pertaining to Abedin’s work with Clinton on Weiner’s personal laptop. Those documents were reportedly sent to the computer by Abedin.

"This is a disturbing development. Our experience with Abedin’s emails suggest these Weiner laptop documents will include classified and other sensitive materials," said Judicial Watch President Tom Fitton.

Weiner reported to prison to begin his 21-month sentence. He is being held at the Federal Medical Center Devens in Massachusetts. The facility in Ayer, about 40 miles west of Boston, has an inmate population of more than 1,000 at the medical center and over 100 more at an adjacent minimum security satellite camp.

It's the same prison that once housed Boston Marathon bomber Dzhokhar Tsarnaev.

Abedin and Weiner submitted paperwork to withdraw their divorce case, the New York Post reported, citing sources. The judge announced in court that the case was "discontinued."

The couple reportedly wanted to finalize their divorce out of court in the interest of keeping their 6-year-old son out of the spotlight, according to the New York Daily News. Huma was expected appear in court on Wednesday for a compliance conference.