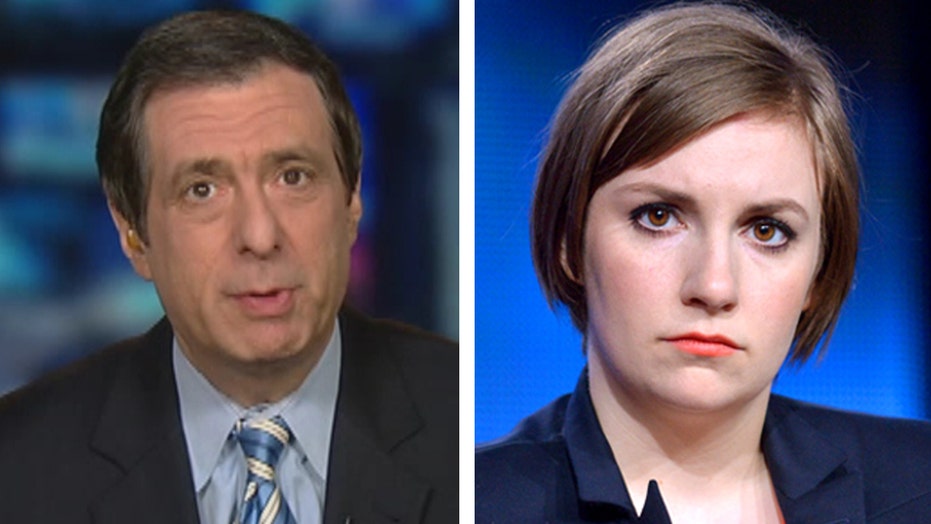 Kurtz: Lena Dunham is her own worst enemy

Whether she was raped by someone else, I have no idea.

But after the star of HBO’s “Girls” claimed in her book that she was coerced into sex by a Barry at Oberlin College, Random House is backing off.

“The name ‘Barry’ referenced in the book is a pseudonym. Random House, on our own behalf and on behalf of our author, regrets the confusion,” the publisher said in a statement to The Wrap. And Random House is willing to cough up legal fees.

This seems to be the season for disputed rape claims. Rolling Stone made a mess of its Jackie story, to the point that we don’t know what happened to her at the University of Virginia but we sure know that some of what the magazine reported didn’t happen. Bill Cosby has counter-sued his latest accuser over a drugging-and-assaulting allegation from back in 1974, but must deal with more than 20 other women who are making similar if ancient claims.

And now Dunham, the darling of the liberal intelligentsia, has raised questions about her own credibility.

In her book, “Not That Kind of Girl,” Dunham goes after an unidentified man named Barry. In one section, she says she had consensual sex with an unnamed man a decade ago but that he tried to get away with not using a condom, and “didn't say hi to me on campus the next day."

In another passage, she admits that “I am an unreliable narrator.” And then:

“In another essay in this book I describe a sexual encounter with a mustachioed campus Republican as the upsetting but educational choice of a girl who was new to sex when, in fact, it didn’t feel like a choice at all.”

This is no minor matter. Dunham got a $3.7 million advance for this book. She is something of a cultural icon, famous for taking off her clothes.

Random House notes that the copyright page contains the disclaimer that “some names and identifying details have been changed.”

But as lawyer/blogger Eugene Volokh notes, “Early in the book, when she mentions a boyfriend of hers and labels him Jonah, she adds a footnote: ‘Name changed to protect the truly innocent.’ Reasonable readers, it seems to me, reading the rest of the memoir, would assume that ‘Barry’ — whose name wasn’t accompanied with any such footnote — was actually named Barry. Even if not all readers would so conclude, many would, and quite understandably so.”

The problem, from a legal standpoint, is that there were other details that tended to identify Barry, such as that he wore “purple cowboy boots.” As Breitbart News’ John Nolte wrote after going to Oberlin to investigate, Dunham says Barry “worked at the campus library, and even names the radio talk show he hosted. To be sure we get the point, on three occasions Dunham tells her readers that her attacker is a Republican or a conservative, and a prominent one at that -- no less than the ‘campus's resident conservative.’…

“We immediately found that there indeed was a prominent Republican named Barry who attended Oberlin at the time in question.”

On the fateful night, Dunham writes, she had been drinking and doing cocaine, and took Barry back to her apartment, even though he had already made an aggressive and intrusive sexual move on her.

She discovered twice during intercourse that Barry had slipped off his condom without telling her, and then, says Dunham, she threw him out. She says Barry hurt her to the point that she had to visit a doctor. Her conclusion:

Pretty rough stuff. But simply not using someone’s name, or using a pseudonym, does not protect a writer if the person being described can be identified by others. That is why Rolling Stone committed a breach by not contacting the unnamed UVA men being accused of rape, after including identifying details about some of them.

And so a Barry who attended Oberlin, but who does not match Dunham’s description in numerous respects, hired a lawyer named Aaron Minc, who  began raising money on a site called GoFundMe for a possible lawsuit against Dunham and her publisher.

In its statement, Random House says: “We are offering to pay the fees Mr. Minc has billed his client to date. Our offer will allow Mr. Minc and his client to donate all of the crowd-funding raised to not-for-profit organizations assisting survivors of rape and sexual assault.”

This isn’t the only instance in which Dunham has invited trouble by writing about sex. The book also describes sexual experimentation with her sister, including bribing her with candy to kiss her on the lips and examining her vagina when Dunham was 7 and her sister 1 year old.

In a statement to Time, Dunham said her sister had approved the passages in advance, that “childhood sexual abuse is a life-shattering event for so many,” and that “if the situations described in my book have been painful or triggering for people to read, I am sorry as that was never my intention.” She went into a “rage spiral” on Twitter, calling the allegations “upsetting and disgusting.”

The irony, of course, is that this isn’t a case of her detractors digging into her past. Lena Dunham raised these questions about herself, in her own book, and put her publisher in the position of having to pony up money to head off legal action.

Update: Lena Dunham is defending herself in BuzzFeed.

“Speaking out was never about exposing the man who assaulted me. Rather, it was about exposing my shame, letting it dry out in the sun. I did not wish to be contacted by him or to open a criminal investigation…

“I have had my character and credibility questioned at every turn. I have been attacked online with violent and misogynistic language. Reporters have attempted to uncover the identity of my attacker despite my sincerest attempts to protect this information. My work has been torn apart in an attempt to prove I am a liar, or worse, a deviant myself. My friends and family have been contacted. Articles have heralded “Lena Dunham’s shocking confession.” I have been made to feel, on multiple occasions, as though I am to blame for what happened.