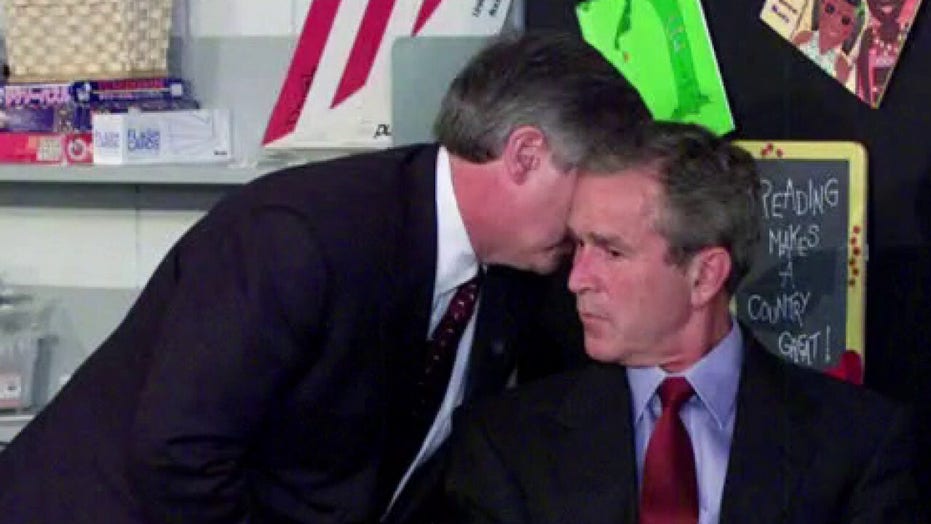 Andy Card reflects on events on Sept. 11: That was the day George W. Bush became president

The man who broke the news to President George W. Bush that America had been attacked by terrorists on the morning of Sept. 11, 2001 recalled the moment on "Your World" Friday.

"That day, the president thought he was going into a classroom to talk about his favorite topic ... education and reforming our education system," Andy Card, then White House chief of staff, told host Neil Cauvto. "We thought it was going to be an easy day."

Bush had just arrived at Emma E. Booker Elementary School in Sarasota, Fla., when he was informed a plane had hit one of the World Trade Center towers in New York City.

Initial reports stated that the aircraft was believed to be a "small, twin-engine prop plane," Card remembered. "I remember his [Bush's] reaction hearing that was, 'Oh, what a horrible accident, the pilot must have had a heart attack or something.'"

While standing outside the second grade classroom where Bush was listening to a reading of the children's book "The Pet Goat," Card was told that a second plane had hit the other World Trade Center Tower.

"That's when I knew it couldn't have been an accident. It couldn't have been a coincidence," Card told Cavuto. "So, I had to pass a test that chiefs of staff have to pass all the time: Does the president need to know? ... I thought about what I would say, I walked into the classroom ... I walked up to the president -- he did not see me coming -- I leaned over and whispered into his right ear, 'A second plane hit the second tower. America is under attack.'

"I then stood back so that he [Bush] would not ask a question or start a dialogue," Card recalled. "I imagine there was a boom microphone picking up everything, and I didn't want to have a dialogue with him, but it was an unbelievable message to deliver to a president, but even more absurd is that it had happened in a classroom of second graders."

"I honestly believe the words that most impacted [him] was when I said 'America is under attack'. And I say this -- I don't know that this is what the president thought, but that was the day he realized the real burden of being a president," Card said. "You know, that was the day he became president. He took the oath on January 20th, but I think it was September 11, 2001 that the magnitude of the responsibility, really, he acknowledged was his responsibility, and I think he lived up to the expectations that we all had."