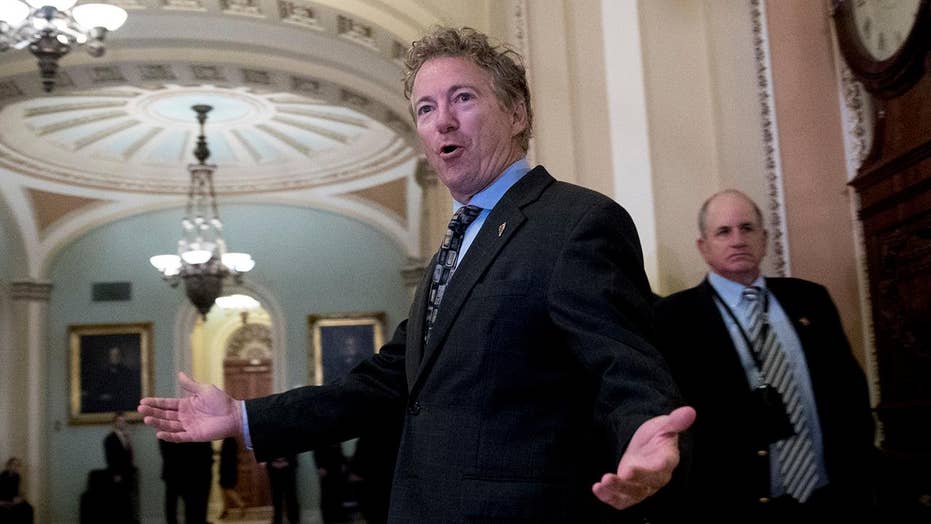 The man who allegedly attacked Sen. Rand Paul is out on $7,500 bail and -- so far -- faces only a misdemeanor charge, as questions surround the attacker's motive as well as the extent of the senator's injuries.

According to the jailer at Warren County Regional Jail, 59-year-old Rene Boucher was released on $7,500 bail Saturday.

“He faces Assault in the 4th degree, minor injury,” Jailer Stephen Harmon told Fox News on Monday, pointing further inquiries to the Kentucky State Police. “Other charges may be pending.”

But Paul, R-Ky., appears to be facing more than a “minor injury,” according to updates from his office. On Sunday, Paul was recovering from five broken ribs, including three displaced fractures, after he was assaulted by the attacker who tackled him from behind at his home. Boucher is reportedly Paul’s neighbor.

The Kentucky State Police told Fox News they are still running an active and open investigation and just learned of Paul’s condition.

State Police told Fox News on Monday that in Kentucky, there is a statute that considers an assault a felony only if there is serious physical injury.

Though the State Police was unable to provide Fox News a timeline for when their investigation will be complete, a spokesman said “it is up to Commonwealth prosecutors” whether Boucher’s charges could change from misdemeanor to felony, depending on the severity of Paul’s injuries.

“Prosecutors will review our case in its entirety and they’ll make a determination if it will be bumped up to felony,” Jeremy Hodges, master trooper and public affairs officer for Kentucky State Police Post 3 at Bowling Green, told Fox News on Monday. “The senator’s injuries are part of the investigation.”

When asked about a possible motive for Boucher, Hodges told Fox News that it was something they could not release, as “it is an active investigation” and that they are “bound by security measures in place for the senator.”

Boucher's next court appearance is set for Thursday morning.

Doug Stafford, a senior adviser to Paul, told Fox News that it is unclear when Paul will return to work because he is in “considerable pain” and has difficulty getting around, including flying. Stafford said this type of injury is marked by severe pain that can last for weeks or even months.

“This type of injury is caused by high velocity severe force,” Stafford said in a statement to Fox News.

The Bowling Green Daily News reported that an arrest warrant said Paul told police his neighbor came onto his property and tackled him from behind Friday, forcing him to the ground, all while the senator was mowing his lawn. He had trouble breathing because of the rib injury, the warrant said.

Hodges would not confirm that Boucher is Paul’s neighbor.

Sunday’s disclosures about the senator's condition came a day after Paul’s office said the senator was fine and characterized his injuries as minor.

Paul and his wife, Kelley, “appreciate everyone’s thoughts and well wishes and he will be back fighting for liberty in the Senate soon,” Stafford said.