President Trump is within his rights to invoke executive privilege, including when it comes to former White House communications director Hope Hicks, according to Alan Dershowitz.

"The president is perfectly entitled to invoke executive privilege. If they think it goes too far ... let the courts decide."

"As far as the current issue is concerned, all three branches of government have privilege," he continued. "You can't call a law clerk at the Supreme Court and ask the law clerk, 'What did you discuss with the justice?' Imagine if they tried to call legislative assistants of senators or congressmen, the same congressmen who are demanding that [Hicks] speak would be up in arms."

Dershowitz claimed there is a risk of weakening privilege power throughout the three branches of government in cases where such powers are challenged.

"That would have a big structural impact on government and on civil liberties." 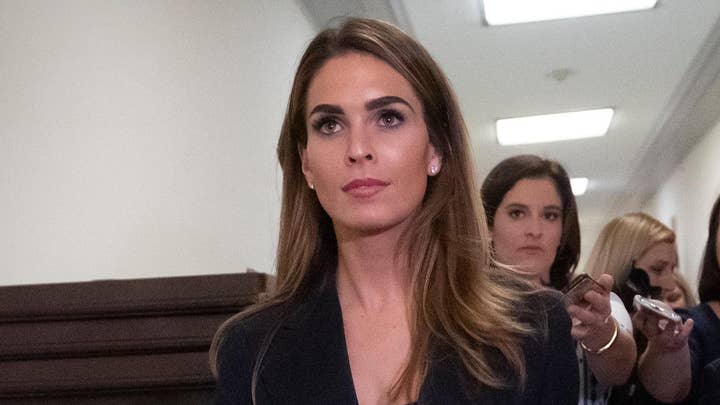 Hicks was questioned behind closed doors Wednesday by members of the House Judiciary Committee as part of the panel's review of obstruction allegations and Special Counsel Robert Mueller's report on the Russia investigation.

Some Democrats complained that Hicks – who is now the chief communications officer at Fox Corp. – was ordered by the White House to stay quiet about her time as an aide to Trump.

Earlier Wednesday, House Judiciary Committee Chairman Jerrold Nadler, D-N.Y., declined to comment on the substance of the interview: "All I'll say is Ms. Hicks is answering questions put to her and the interview continues."

In a letter Tuesday to Nadler, White House Counsel Pat Cipollone wrote that Trump had directed Hicks not to answer questions "relating to the time of her service as a senior adviser to the president."

Cipollone said Hicks was "absolutely immune" from compelled testimony with respect to her service to the president because of the separation of powers between the executive and legislative branches. The White House similarly has cited broad executive privilege with respect to many of the Democrats' investigative demands, using the president's power to withhold information to protect the confidentiality of the Oval Office decision-making process.