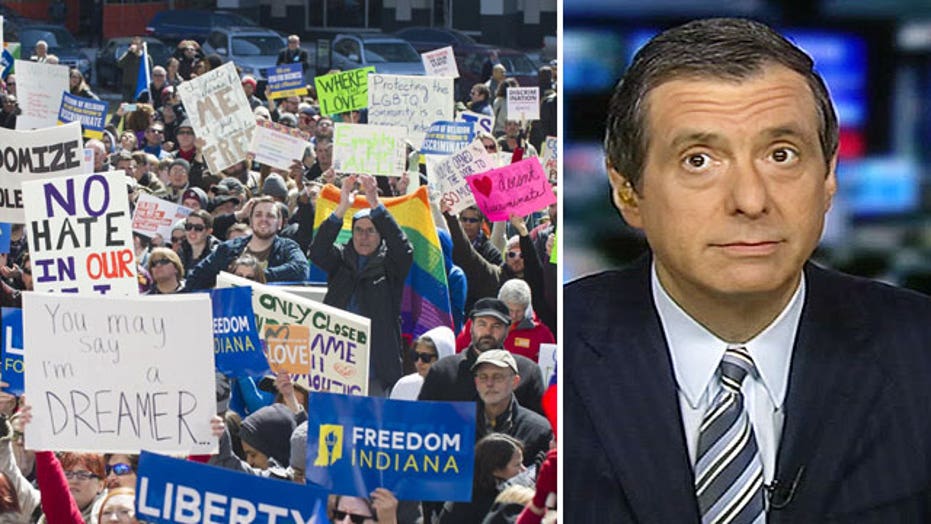 The Indiana pizza uproar is still giving me indigestion.

Just when gay rights advocates had won a victory by getting Mike Pence and the Indiana legislature to modify their religious freedom law, left-wing zealots harassed the poor folks at Memories Pizza into temporarily shutting down.

As you probably know, the contretemps began when Crystal O’Connor, one of the shop’s owners, told a local ABC station that they wouldn’t provide pies for a gay wedding. As she later told Neil Cavuto, “It is not a sin that we bring gays into our establishment and to serve them. It is a sin, though, if we cater their wedding. We feel we are participating, we are putting a stamp of approval on their wedding.”

By answering that hypothetical question, O’Connor unleashed an outpouring of hate on social media. Yelp was flooded with such images as Hitler holding a pizza and Jesus holding up a middle finger. “Avoid this place like the Plague,” one person wrote. “Sounds to me like a memory of owning a pizza place is all the owners going to have after this idiocy,” said another.

Now I don’t think it’s fair to blame this on “the left.” It’s not that liberal commentators or leading activists were mounting a crusade against the pizzeria, it’s these morons who spew venom, often anonymously, with nasty tweets, nasty emails, and now nasty restaurant “reviews.”

I get that Crystal O’Connor’s business may not have a legal right to refuse service, not that there’s a great demand for sausage and pepperoni at gay weddings or any other kind of wedding. But she wasn’t even expressing animosity toward gays and lesbians, just explaining her Christian beliefs.

This reinforces my view that the clashes in Indiana and Arkansas were largely about the politics of symbolism. Whether you’re more concerned about religious liberty or about gay rights, how many bakers and florists could have been affected by the Indiana law as originally signed, before a media and business backlash prompted Pence to accept gay rights language in the revised measure?

But the larger problem is that too many on the left want to silence free speech or punish those whose beliefs are deemed unacceptable. You see this every time a campus protest forces a conservative speaker to cancel an appearance—and that should depress honest liberals who once fervently fought for free speech.

Remember last year, when pressure from gay activists and boycott threats forced Brendan Eich to resign as CEO of the browser company Mozilla? His sin was to make a donation to the 2008 Prop 8 campaign in California, which succeeded at the time in banning gay marriage.

Keep in mind that those who don’t support gay marriage are being denounced and hounded for taking the same position that Barack Obama espoused until 2012.

Same-sex marriage is now legal in 37 states, and with young people increasingly seeing it as a non-issue, that trend will undoubtedly continue. But it’s important for all of us, in the media and elsewhere, to respect the views of a significant number of Americans who don’t agree.

On Crystal O’Connor and the pizza controversy, the Atlantic’s Conor Friedersdorf, a gay marriage supporter, frames the question around small-business owners as “should we destroy their livelihoods”:

“The owners of Memories Pizza are, I think, mistaken in what their Christian faith demands of them. And I believe their position on gay marriage to be wrongheaded. But I also believe that the position I'll gladly serve any gay customers but I feel my faith compels me to refrain from catering a gay wedding is less hateful or intolerant than let's go burn that family's business to the ground.

“And I believe that the subset of the gay-rights movement intent on destroying their business and livelihood has done more harm than good here—that they've shifted their focus from championing historic advances for justice to perpetrating small injustices against marginal folks on the other side of the culture war.”

“It is her right to believe whatever she wants. Religious liberty is guaranteed by the Constitution. But in a pluralistic society, freedom of worship cannot mean a business that serves the general public can discriminate. When I was growing up in the South, there were business owners who believed the Lord didn’t intend for different races to mix, much less marry. Federal civil rights legislation barred these businesses from acting on that belief. The proprietors got over it.”

But National Review’s Jonah Goldberg says that critics of these religious freedom laws are going overboard:

“Comparing RFRA laws to Jim Crow laws turns all of this on its head. Jim Crow laws forced tolerant businesses to be intolerant of blacks. No one, anywhere, is suggesting that people who want to do business with same-sex couples should be barred from doing so. The argument is whether the government should force a few ardent Christians (or Jews or Muslims) to participate in a ceremony that violates their faith.”

Rush Limbaugh is escalating matters further, saying the battle is part of “the Democrats’ war on Christianity” because “they resent that Christianity provides a repository for faith and confidence in something other than government, which is where they want all power localized.”

I get that passions are running high. But if Republicans and Democrats were able to find a compromise in Indianapolis, perhaps we could all lower the temperature a bit—and that includes those who think it’s great sport to harass a small pizza shop owner.