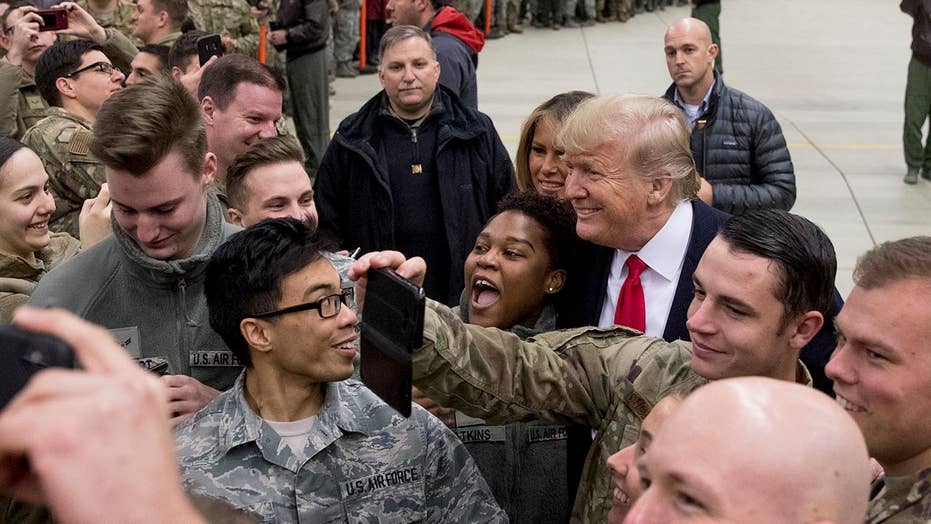 President Trump made his second unannounced visit to U.S. troops abroad on Wednesday, according to reports.

On his way back from meeting troops in Iraq, Trump stopped at Ramstein Air Force Base in Germany for refueling and met with service members there.

Trump slowly made his way down a rope line at the German base, shaking hands, signing autographs, chatting and posing for selfies. Some service members held up “Make America Great Again” caps for Trump to sign.

The president’s earlier visit to a base in western Iraq, about 100 miles west of Baghdad, was his first to U.S. forces in harm’s way overseas.

He said it’s because of U.S. military gains against the Islamic State terror group that he can withdraw 2,000 forces from Syria. Trump said the U.S. mission in Syria was to strip ISIS of its military strongholds — not to be a nation builder. He said that’s a job that should be shouldered by other rich nations — reiterating his America First policies and an ideology that challenges America’s role as global cop.

On Trump’s meeting with senior military leaders, Trump Press Secretary Sarah Huckabee Sanders said: “The generals and President Trump came up with a powerful plan that will allow us to continue our path to total victory. People will see results in a short period of time.”

Asked whether “total victory” referred to the Islamic State group, she said, “It certainly has to do with that.”

Aboard Air Force One, Sanders told reporters that Iraq’s prime minister had accepted an invitation from Trump to visit the White House.

The two leaders spoke by phone. They did not meet when Trump was in Iraq.

The White House said security concerns and the short notice of the trip prevented Trump from meeting with Adel Abdul-Mahdi.

Abdul-Mahdi’s office said in a statement that “differences in points of view over the arrangements” prevented the two from meeting face-to-face, but they discussed security issues and Trump’s order to withdraw U.S. troops from Syria over the phone.

The head of a powerful Iraqi militia that enjoys backing from Iran is threatening to expel U.S. forces from Iraq after the unannounced visit.

Qais Khazali, the head of the Asaib Ahl al-Haq militia, promised on Twitter that Iraq’s parliament would vote to expel U.S. forces from Iraq, or the militia and others would force them out by “other means.”

Khazali is an avowed opponent of the U.S. who rose to prominence as a leader in the Shiite insurgency against the U.S. occupation. He was detained by British and U.S. forces in Iraq from 2007 to 2010.

Asaib Ahl al-Haq is represented in Iraq’s parliament by the Binaa bloc, one of the two rival coalitions which together control nearly all the seats in the lawmaking body.

Likewise, the head of one of two main blocs in Iraq’s Parliament is denouncing Trump’s unannounced visit, calling it a “blatant violation of Iraq’s sovereignty.”

Iraq’s government has close military and diplomatic ties with Washington, though few parties want to be seen as overly close to the U.S.

The Islah bloc is considered closer to the U.S. than the rival Binaa bloc, which espouses close ties with Iran.