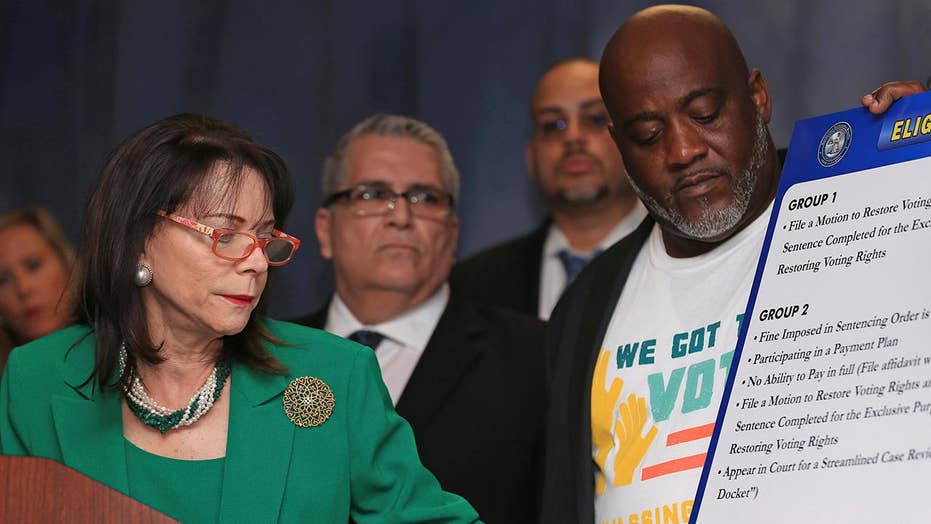 The 1.4 million ex-felons who had their voting rights restored face more issues following a bill passed by Governor DeSantis, which states felons must pay all fines and fees linked to their sentence before they can vote.

MIAMI -- Tarshea Sanderson, who was released from prison in 2016, was looking forward to heading to the voting booth to cast a ballot.

She was one of 1.4 million ex-felons whose voting rights were restored after the passage of Amendment 4. But now, whether she can vote is in doubt because of a new bill passed by Gov. Ron DeSantis.

“I was so excited. You know, we campaigned for this … we canvassed. You know we did a lot of walking in neighborhoods, talking to people, making sure this amendment passed,” said Sanderson, a Florida resident who in 2013 was convicted of scheming to defraud a financial institution.

Sanderson, who still owes $65,000 in court costs and restitution from her criminal case, will not be able to vote until she pays it all off.

The bill is part of an effort by the governor to avoid election chaos after the amendment passed – leaving state officials scrambling to figure out how to add thousands of new voters to the rolls in a matter of months.

Tarshea Sanderson says former felons like herself feel the promise of Amendment 4 has been undercut. (Elina Shirazi)

SB 7066, which DeSantis signed and went into law in June, requires former felons to pay all fines and fees linked to their sentence before they can vote.

The governor's letter to the Secretary of State on Bill 7066. (Elina Shirazi)

Florida’s Gov. Ron DeSantis put a new measure into place late June, requiring former felons to pay all fines and fees linked to their sentence before they can vote. (Elina Shirazi)

Florida State Rep. Blaise Ingoglia, a Republican who backed the measure, told Fox News the amendment was too vague and would have caused too much confusion.

But people like Sanderson argue the new measure is too restrictive. She said it may take 10 years before she can pay off her court fees and head to the polls.

Sanderson said completing a sentence should mean you have a right to vote.

“Now they're imposing all of these conditions and all of these stipulations to make it harder for us to vote,” Sanderson said.

While some opponents compare the requirements to a modern-day “poll tax” — Florida’s governor says it’s simply a part of a felon's sentence completion.

While some compare the requirements to a modern-day “poll tax” — Florida’s governor says it’s simply a part of felons sentence completion. (Elina Shirazi)

Republican legislators who backed the measure said it's only fair that felons are only allowed to vote after they finish paying off their legal debt.

“I don't think it's fair if somebody was arrested and did time for a white-collar crime and they scammed people out of $10 million, don't have to pay that $10 million back in order to vote. No, they do. Because not only is it the right thing to do. It's the moral thing to do also,” Ingoglia said.

In November, millions of Floridians voted for Amendment 4. The amendment gave back voting rights to former felons once they completed their sentences. The only exception was if felons were convicted of murder or a serious sex offense. (Elina Shirazi)

In the meantime, civil rights groups like the Florida Rights Restoration Coalition are working to register voters and raise money to help pay off their fees.

“We estimate that this legislation on fines and fees might have a direct impact on approximately 540,000 of the 1.4 million returning citizens and we are committed to working with each and every one of them to make sure that we're able to modify their sentence, and remove those financial barriers,” Desmond Meade, the executive director of the Florida Rights Restoration Coalition said.

The Florida Rights Restoration Coalition estimates that this legislation on fines and fees might have a direct impact on approximately 540,000 of the 1.4 million returning citizens. (Elina Shirazi)

He added, “Where other people see obstacles, we see opportunities.”

Several civil rights groups, including the American Civil Liberties Union, have sued over Amendment 4. Judges will decide how to move forward on the specific language in the amendment, and how that will impact these potential voters.

Those involved in the lawsuit hope to reach a conclusion before next year's election.