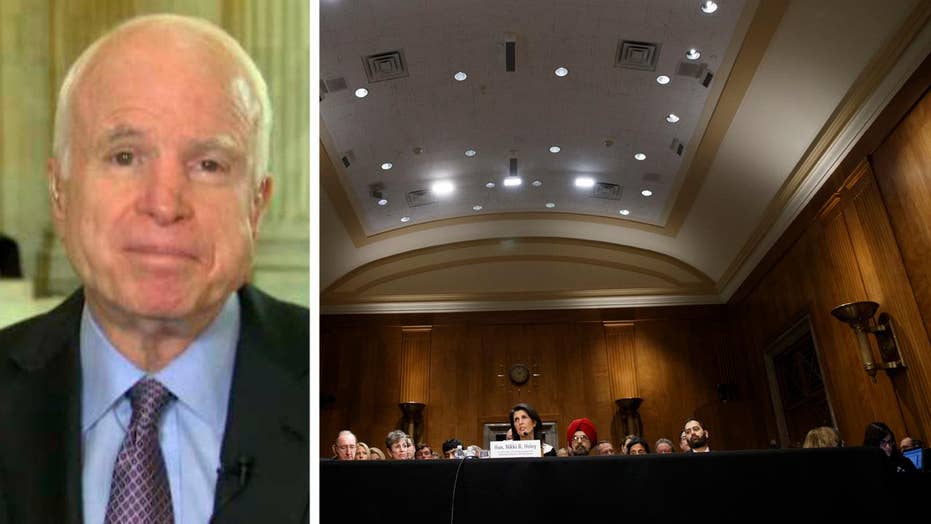 Sen.  John McCain said in an interview Wednesday that he is undecided about supporting President-elect Donald Trump’s pick for Secretary of State, Rex Tillerson.

“I am very concerned about someone who took a friendship award from Vladimir Putin, who’s a butcher,” McCain told CBS. McCain called Putin a KGB agent and said “I’ve had concerns and I’ve had several conversations with him.”

Earlier this week, McCain told Fox News that he was leaning toward supporting the former ExxonMobil CEO. When pressed about his support, McCain said, “Barely, yes. I think [Tillerson] is a good man; I think he is aware of Vladimir Putin.”

The Wall Street Journal reported that three Republican senators have expressed concern over Tillerson. Sen. Marco Rubio is reportedly undecided on his vote and said he will not discuss the matter until he comes to a decision.

During the tense back-and-forths at the Senate Foreign Relations Committee confirmation hearing last week, Rubio, R-Fla., cross-examined Tillerson on policy regarding Russia, Cuba, Saudi Arabia and the Philippines. At the end of Rubio's second questioning period, Tillerson sought to allay any concerns the aggressive Rubio may have had.

"There seems to be some misunderstanding that I see the world through a different lens, and I do not," Tillerson said. "...But I'm also clear-eyed and realistic about dealing with cultures."

Tillerson's statement followed a heated initial session during which the ExxonMobil CEO refused to specifically call Putin a "war criminal."

"I find it discouraging your ability to cite that, which I think is globally accepted," Rubio said.