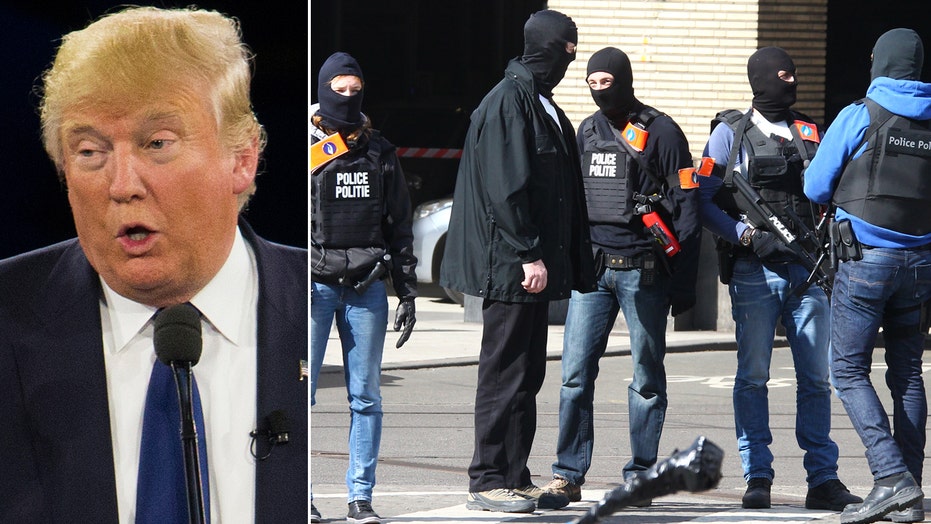 Trump: We have to be very careful who comes into our country

Republican presidential frontrunner renews call to 'close up our borders... until we figure out what is going on' following deadly attacks in Brussels

“The first job of the president is to be commander in chief,” Cruz told Fox News following the morning rush-hour attacks that killed at least 31 people in a Brussels airport and on the city’s subway system. “It’s unconscionable. It needs to change. … If I am president, I will destroy ISIS.”

“I’ve been talking about this for a long time, and look at Brussels,” Trump said on “Fox & Friends.” “Brussels was a beautiful city, a beautiful place with zero crime, and now it’s a disaster city.”

At a press conference earlier in the day in Washington, D.C., Cruz said the visa waiver program “no doubt” needs “serious scrutiny.”

And he called for an “immediate halt” to Obama’s recent plan to allow tens of thousands of Syrian refugees into the United States, as a result of that country’s years-long civil war.

“Our vetting programs are woefully insufficient,” Cruz said, arguing that ISIS has already stated its intentions to try to infiltrate terrorists among the refugees so they can “commit acts of jihad.”

Trump last year called for a temporary ban on all Muslins into the U.S. after the Paris attacks in November by Islamic extremists and the San Bernardino terror attacks in December. And he has vowed if elected to build a security wall along the entire U.S. southern border.

Democratic presidential candidate Hillary Clinton said in the wake of the attacks, “Americans stand in solidarity with our European allies.”

“Terrorists have once again struck at the heart of Europe, but their campaign of hate and fear will not succeed,” said Clinton, a former secretary of state in the Obama administration. “Today's attacks will only strengthen our resolve to stand together as allies and defeat terrorism and radical jihadism around the world."

GOP presidential candidate John Kasich said he was “sickened” by the images of the carnage and that the U.S. must “redouble our efforts with our allies to identify, root out and destroy the perpetrators of such acts of evil.”

The other Democratic presidential hopeful, Vermont Sen. Bernie Sanders, said, "We need to have significantly improved intelligence, and not just related to the United States. He have to share intelligence with the rest of the world."

Citizens of 38 countries can travel to the United States for business or tourism for up to 90 days, under the visa waiver program.

Congress recently put new restrictions on the program for dual citizens of Sudan, Iran, Iraq and Syria, but the program overall continues.

Cruz also said at the Washington press conference: “Today’s attacks in Belgium underscores that this is a war. This is not an isolated incident. This is not a lone wolf. ISIS had declared jihad. … The time for the president’s political correctness has passed. … We absolutely have to revisit our immigration policy across the board to prevent Islamic terrorists from coming in.”