The U.S. on Saturday welcomed the beginning of negotiations between the Taliban and the Afghan government, in what is hoped to be the beginning of the formation of a power-sharing government to end decades of devastating conflict in the country.

“Today is truly a momentous occasion,” Secretary of State Mike Pompeo said at the beginning of negotiations in Doha, Qatar. “Afghans have at long last chosen to sit together and chart a new course for your country. This is a moment that we must dare to hope.’

Pompeo spoke at the opening ceremony, where the Taliban also keep a political office. Talks will include issues such as a permanent cease-fire, women’s rights and the disarming of militias and Talian fighters. Power-sharing and changes to the constitution will also be discussed.

The Taliban were removed from power, where it ran a repressive regime for years, after the U.S.-led coalition after the 9/11 attacks for its role in harboring Al Qaeda terrorist leader Usama bin Laden.

The Trump administration has noted the U.S. role in helping negotiations get underway, with them coming as a result of a U.S.-Taliban peace deal signed in February -- a deal that also sees the U.S. withdrawing troops from the country, contingent on Taliban pushing back against terror groups.

“The start of Afghanistan peace negotiations marks an historic moment in the Afghan peace process and is an important step in advancing the President’s South Asia Strategy,” Defense Secretary Mark Esper said in a statement. “It is crucial for both sides to take advantage of this opportunity to make a truly Afghan-led and Afghan-owned peace process a success.”

No women are on the Taliban team, while the Afghan government’s team includes four women who have promised to keep women’s rights in any power-sharing deal that may result from the likely tense negotiations. Women under the Taliban were denied the right to work, education and to participate in politics. 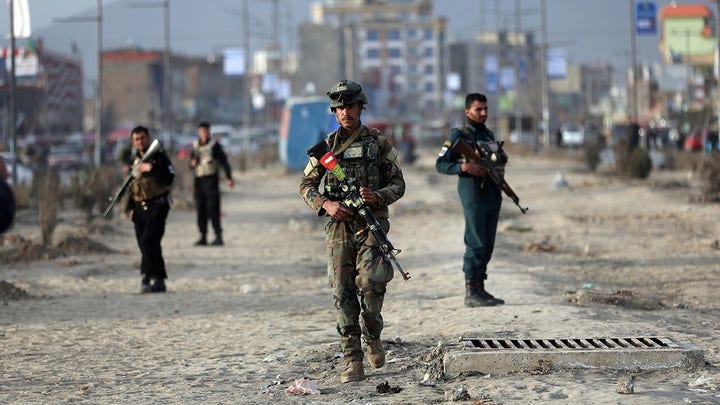 The peace talks have also been delayed, with officials noting that 1,200 have been killed and more than 15,000 injured since the agreement for talks was reached.

Pompeo said the U.S. welcomed the Taliban's commitment not to allow terror groups like Al  Qaeda to use their territory to train, recruit and fundraise, and from the Afghan government that their country should not be used as a base for international terrorists. He also said that their choices would determine the size of U.S. aid.

“I would urge you – as you make your decisions you should keep in mind that your choices and conduct will affect both the size and scope of United States' future assistance,” he said. “Our hope – our hope is that you will reach a sustainable peace and our goal is an enduring partnership with Afghanistan.”

The peace talks are the latest U.S.-led diplomatic activity in the region. On Friday, the U.S., Israel and Bahrain announced that Bahrain and Israel have normalized relations, in addition to a similar deal last month between Israel and the United Arab Emirates.