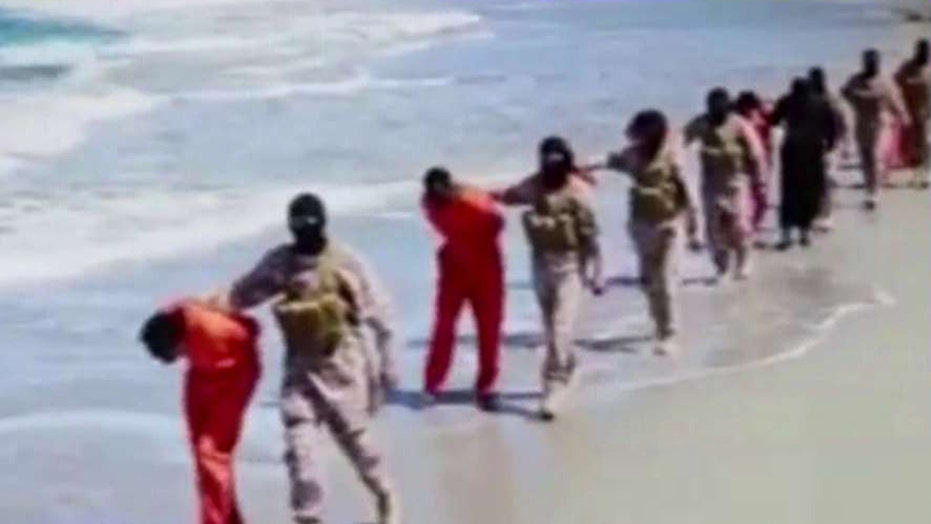 Pressure on WH to call killing of Christians genocide

ISIS responsible for a number of attacks, murders on Christians

The Obama administration is facing growing pressure to step up and formally call the violence against Christians in the Middle East genocide, as evidence of atrocities mounts ahead of a looming deadline to decide on a label.

Less than a year ago, a video surfaced purporting to show 30 Ethiopian Christian men marched onto a beach before being beheaded and shot by the Islamic State, supposedly for refusing to renounce their faith.

But with the administration facing a March 17 deadline to decide how to label the situation, officials have hedged when asked which way they may decide.

Secretary of State John Kerry faced tough questioning on Capitol Hill days ago, when pressed on why the administration hasn’t yet called the violence genocide.

“It does require a lot of fact-gathering,” Kerry said at a House Foreign Affairs Committee hearing. “I mean you have to get the facts from the ground, more than just anecdotal.”

Rep. Dana Rohrabacher, R-Calif., countered that “the whole world knows that Christians are being slaughtered in the Middle East.”

“It's clear,” he continued, “it's time for America to act -- and the excuse that we've got to study it, we've got to ask the lawyers what the wording is … It's unacceptable.”

A new ad, and petition drive, launched by the Knights of Columbus and In Defense of Christians is putting additional pressure on the administration, citing statements from presidential candidates of both parties calling what’s happening genocide.

“With the U.S. Commission on International [Religious] Freedom having stating this, with 200-plus bipartisan sponsors [of a House resolution] having stated this, with the major presidential candidates of both parties having stated this, the question is, does the State Department want to stand alone as a genocide denier?” Andrew Walther, a vice president with the Knights of Columbus, told Fox News.

He said the U.S. has a “checkered past” in terms of labeling mass killings as genocide, and said there's “a real opportunity here to get it right.”

“All you have to do is look at the pictures and you know this is genocide,” Walther said.