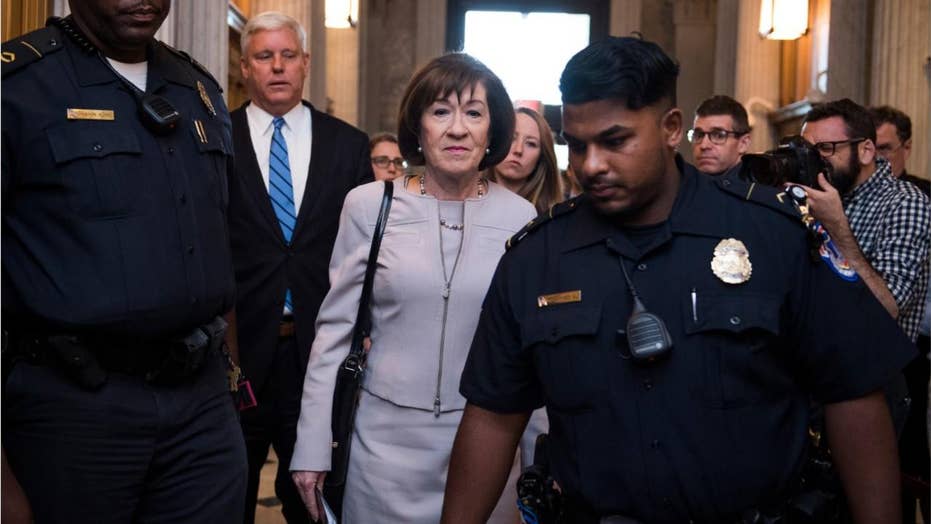 Senator Susan Collins has been targeted by liberal activist after she pledged to vote to confirm Brett Kavanaugh to the Supreme Court.

Activists’ efforts to convince lawmakers to oppose Supreme Court nominee Brett Kavanaugh descended into calls for public harassment and accusations of being a “rape apologist” after the judge gathered enough votes to get confirmed on Saturday.

Maine senator Susan Collins, a moderate Republican who’s often a swing vote on issues, paved the way for the nominee to the Supreme Court. Sources told Fox News that the confirmation vote of Kavavanaugh is expected to begin between 3:30pm and 4pm Eastern Time. The whole procedure will take up to 20 minutes.

In a fiery and lengthy speech on Friday, Collins explained her decision to support the Kavanaugh’s nomination, slamming the confirmation process that resembled a “caricature of a gutter-level political campaign” and said anti-Kavanaugh outside groups distorted the judge’s record with “over-the-top rhetoric.”

But in the wake of the unsuccessful bid to stop Kavanaugh’s confirmation, the activists both on Capitol Hill and on social media began lashing out against Collins and her colleagues.

“Senator Susan Collins is the mother & grandmother of white women in America who gave us a Donald Trump presidency. The 53%,” tweeted Linda Sarsour, a far-left activist and a leader of the Women’s March that branded Collins a “rape apologist” after the speech. “She is a disgrace & her legacy will be that she was a traitor to women and marginalized communities. History will not treat her kindly.”

“A white woman Senator is talking about presumption of innocence that is never offered to Black men in America. You are watching white supremacy live on the Senate Floor,” Sarsour said even before Collins finished her speech.

Kat Calvin, the founder of anti-voter ID group “Spread the Vote” that claims to be non-partisan, urges people to publicly harass Collins over her voting decision.

“Never let Collins have a moment of peace in public again,” she wrote.

The announcement of Collins’ voting intentions also fueled liberal activists’ hopes to use the issue to unseat the Maine senator in the 2020 election, despite being among the top 10 most popular senators in America.

An anti-Collins fundraiser page raised nearly $3 million in pledges by Friday night, with the money going to her future opponent.

“If you fail to stand up for the people of Maine and for Americans across the country, every dollar donated to this campaign will go to your eventual Democratic opponent in 2020,” the fund’s organizers wrote. “We will get you out of office.”

On Capitol Hill, the emotions reached a fever pitch, with multiple senators being targeted by loud campaigners.

“Shame, shame, shame,” screamed protestors at Democratic Sen. Joe Manchin as he announced his intention to cast his vote for Kavanaugh. The senator from West Virginia is expected to be the only Democrat voting for the nominee.

South Carolina senator Lindsey Graham, who was one of the most ardent supporters of the Kavanaugh nomination, was also accosted activists lamenting his role in the process.

“You old, white privileged patriarchy!” a woman shouted at Graham as he walked down the street to his car. The video was captured by the Daily Caller.

“Yeah, please move to South Carolina,” the senator fired back after the protester said she will vote him “out of office.”

He added: “I hope you come. You'd be welcome in South Carolina.”

The protests also spilled over to the home of Senate Majority Leader Mitch McConnell in Washington, D.C., with demonstrators holding a so-called “confirmation kegger.”

The protest was organized by employees of the Center for Popular Democracy, a group that receives millions from wealthy liberal foundations and incites activists to commit civil disobedience acts, despite such activity being illegal under their tax-exempt status.

Jennifer Flynn Walker, director of mobilization and advocacy at the Center for Popular Democracy, told HuffPost that the event was held to show McConnell that the Kavanaugh nomination hurt the country.

“We're not even talking about the serious issues,” Walker continued. “That's the thing about this protest today ― this is just ridiculous at this point. Half of the country is actually deeply hurt.”

“Essentially, we just think he's a frat boy,” the CPD activist added, noting that Kavanaugh will do long-lasting damage to the country if he’s appointed to the high court.

McConnell denounced the activist group’s efforts to target lawmakers earlier this week, saying the fight against the nominee reached “a fever pitch” that he has “never seen before.”

“We will not be intimidated,” he added, pointing to protesters “chasing” senators around the Capitol.