Newly-appointed Acting Homeland Security Secretary Kevin McAleenan on Thursday designated the current head of the Transportation Security Administration to be his deputy at the department, in the latest shake-up on the heels of Kirstjen Nielsen’s resignation.

McAleenan appointed TSA Administrator David Pekoske to be the senior official to perform duties of the DHS deputy secretary. McAleenan also announced he would replace Pekoske at TSA with Patricia Cogswell, who currently serves as TSA’s acting deputy administrator.

“Administrator Pekoske brings a wealth of experience and leadership to the Department, previously serving as a senior leader within two DHS agencies: the United States Coast Guard and the Transportation Security Administration,” McAleenan said in a statement Thursday. “Additionally, he has tackled impressive challenges over the course of his career, ranging from acquisition and procurement reform as the Coast Guard’s Vice Commandant to securing America’s traveling public as TSA’s Administrator.”

He added: “I look forward to working with him to meet the homeland security challenges facing our nation.” 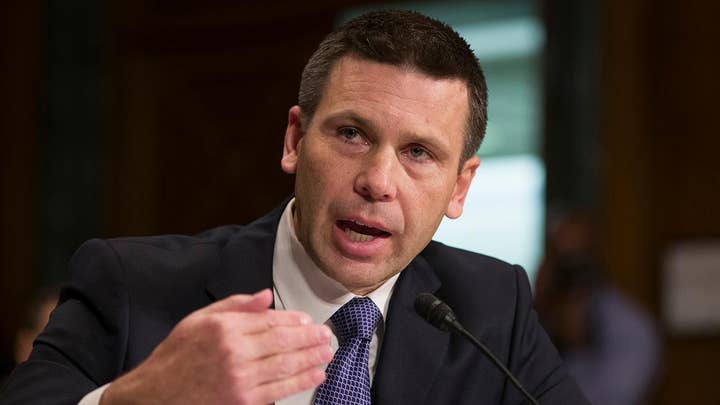 McAleenan’s announcement comes after a turbulent week for the Department of Homeland Security.

On Sunday, following a meeting with Nielsen at the White House, President Trump announced that Nielsen had resigned as DHS secretary. Trump also announced that McAleenan, who was serving as Customs and Border Protection (CBP) commissioner, would replace Nielsen as acting secretary.

Nielsen’s resignation came amid an influx of migrants at the U.S.-Mexico border. Nielsen was reportedly frustrated with the difficulty of getting other departments to help deal with the growing number of families crossing the border.

Administration officials, though, told Fox News on Sunday that McAleenan best fits Trump’s requirement of being the “toughest cop” on the frontier, and that Nielsen had been viewed as resistant to some of the immigration measures pushed by the president and his aides.

By Monday, U.S. Secret Service Director Randolph ‘Tex’ Alles stepped down from his post, after he was told to “prepare an exit plan,” in a signal, almost two weeks ago, that a transition in leadership at DHS was imminent.

White House Press Secretary Sarah Sanders said Monday that the president had picked career Secret Service member James M. Murray to take over the agency in May. Alles will remain in his role until then.

On Tuesday, DHS acting deputy secretary Claire Grady, who was technically next in line to replace Nielsen, resigned.

By Wednesday, Nielsen announced that Immigrations and Custom Enforcement (ICE) Acting Director Ron Vitiello would be stepping down by the end of this week.

“For over three decades, Immigrations and Customs Enforcement Acting Director Ron Vitiello has protected our homeland with conviction,” Nielsen said in a statement. “Ron’s knowledge and expertise as a seasoned law enforcement professional has been invaluable to DHS, and he has left a legacy of excellence as our Department has expanded and refined our efforts to curb illegal immigration and secure our borders.”

Last week, Trump confirmed he had withdrawn the nomination of  Vitiello to become the permanent head of ICE, telling reporters that "Ron’s a good man, but we’re going in a tougher direction, we want to go in a tougher direction." Administration sources tell Fox News that the withdrawal of Vitiello's nomination was the first step in Trump's plan to control the border crisis.

This week, reporters asked the president about the shake-up at DHS.

“I never said I’m cleaning house. Who said that? Don’t know who came up with that. We have a lot of great people there,” Trump said this week.