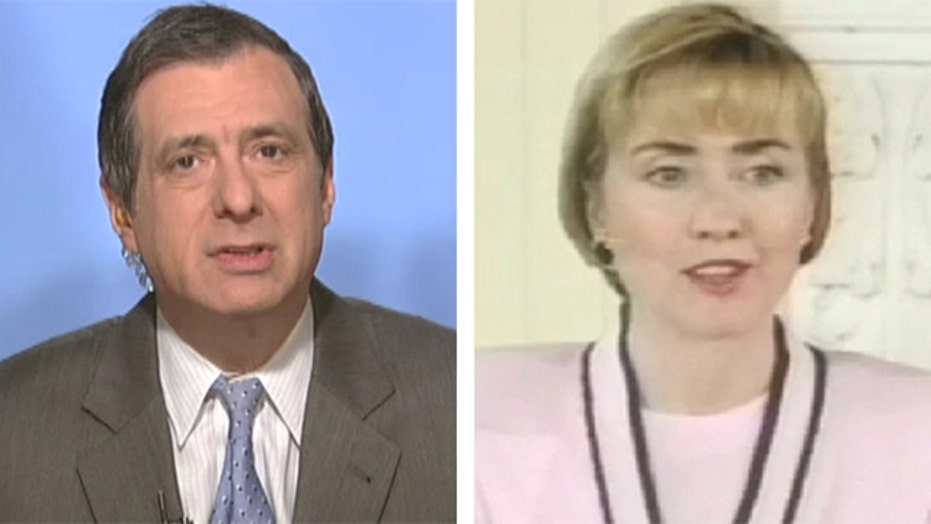 The underlying media narrative of the Hillary email furor isn’t very hard to discern: This is a woman who doesn’t always play by the rules.

Whether fairly or not, that notion is rooted in the 1990s, when first lady Hillary Clinton was surrounded by a constant swirl of allegations and investigations, all of which made for constant media fodder in that pre-Twitter age.

It's all ancient history now, with most voters under 40 barely aware of that turbulent period and a political consensus that there’s little to be gained in rehashing it. But for older journalists who covered her residence in the White House, allegations of questionable conduct reinforce a preexisting image of Hillary Clinton as secretive and less than candid.

There was a time when William Safire, the Nixon aide turned New York Times columnist, caused a huge stir by calling Hillary a “congenital liar.” That was a partisan shot, of course, but tells you something about the tenor of the times.

Some of the allegations of that era were overblown and even bogus. There was never a shred of proof tying her to the suicide of her friend, White House aide Vince Foster, despite a raft of conspiracy theories. Whitewater, which led to a special prosecutor, which led to the Monica Lewinsky scandal, was an Arkansas land deal on which the Clintons lost money.

But there was far more. The cattle futures mess:

“Hillary Rodham Clinton was allowed to order 10 cattle futures contracts, normally a $12,000 investment, in her first commodity trade in 1978 although she had only $1,000 in her account at the time, according to trade records the White House released yesterday.”

“After nearly two years of searches and subpoenas, the White House said this evening that it had unexpectedly discovered copies of missing documents from Hillary Rodham Clinton's law firm that describe her work for a failing savings and loan association in the 1980's.”

“Hillary Rodham Clinton testified for more than four hours today before a federal grand jury investigating whether there has been obstruction of justice at the White House in the inquiry into the First Lady's former Arkansas law firm.”

The fiasco known as Travelgate:

“A memorandum by a former presidential aide depicts Hillary Rodham Clinton as the central figure in the 1993 travel office dismissals, a politically damaging episode that the aide said had resulted from a climate of fear in which officials did not dare question Mrs. Clinton's wishes.”

It’s exhausting just to remember it all.

And this is without getting into her husband’s sex scandals, and how she went on the “Today” show to declare Bill Clinton the victim of a “vast right-wing conspiracy.”

In that environment, little wonder that Hillary had testy relations with the media.

“I had kept the White House press corps at arm’s length for too long,” she wrote in her memoir “Living History.” “It took me a while to understand that their resentment was justified.”

Again during her 2008 campaign, the Clinton camp’s dealing with the press were often tense as journalists perceived her as remote and inaccessible.

Hillary enjoyed a better relationship with the more policy-oriented State Department press corps, but the media polarization returned over her role in Benghazi.

Now the back-to-back media disclosures—the Washington Post on the Clinton Foundation taking foreign government cash and the New York Times on the private email—have revived some of the old questions. And Hillary’s slow-footed response—a single tweet at 11:30 p.m.?—hasn’t helped her case.

There are a raft of unanswered questions for the media, but the biggest mystery may be why Hillary Clinton, knowing the lack of a government account would some day become public, did this to herself.