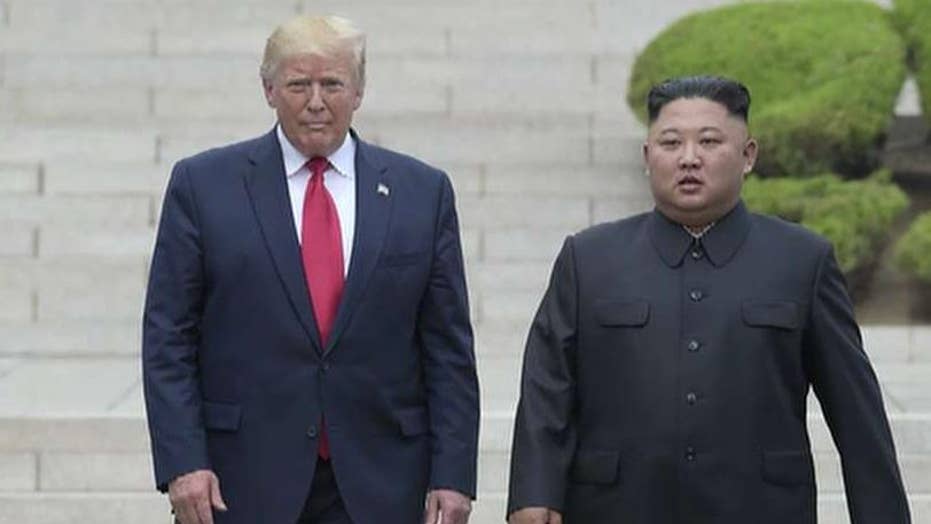 President Trump says Kim Jong Un was honored to have him step across the border into North Korea; John Roberts reports from Seoul, South Korea.

The candidates in the 2020 Democratic presidential primary put aside their squabbles on Sunday - sort of - to focus on a common enemy: President Trump.

“President Trump’s coddling of dictators at the expense of American national security and interests is one of the most dangerous ways that he’s diminishing us on the world stage and subverting our values as a nation,” Biden campaign spokesman Andrew Bates said.

Bates added that Trump’s “conduct reinforces that we urgently need a president who can restore our standing in the world, heal relationships with key allies Trump has alienated and delivered real change for the American people.”

Trump and Kim met in the demilitarized zone between North and South Korea and briefly stepped into the north – making him the first sitting U.S. leader to do so.

After asking if Kim wanted him to cross, Trump took 10 steps into the North with Kim at his side, then escorted Kim back to the South for talks at Freedom House, where they agreed to revive the stalled negotiations.

The spectacle marked the latest milestone in two years of roller-coaster diplomacy between the two nations. Personal taunts of "Little Rocket Man" (by Trump) and "mentally deranged U.S. dotard" (by Kim) and threats to destroy one other have given way to on-again, off-again talks, professions of love and flowery letters.

Sen. Elizabeth Warren, D-Mass., tweeted Sunday that Trump “shouldn’t be squandering American influence on photo ops and exchanging love letters with a ruthless dictator. Instead, we should be dealing with North Korea through principled diplomacy that promotes US security, defends our allies, and upholds human rights.”

Sen. Bernie Sanders, I-Vt., who is locked in a close battle for second in the polls with Warren, reiterated his Senate colleague’s “photo ops” comment and added that Trump “weakened the State Department.”

“The concern here is his incredible inconsistencies. I have no problem with him sitting down with Kim Jong Un in North Korea or any place else. But I don’t want it simply to be a photo opportunity, the whole world’s media was attracted there,” Sanders said during an appearance on ABC’s “This Week.”

Sanders added: “What’s going to happen tomorrow and the next day? He has weakened the State Department. If we’re going to bring peace to this world, we need a strong State Department, we need to move forward diplomatically, not just do photo opportunities.”

Another Democratic senator running for president, Amy Klobuchar of Minnesota, was skeptical that any substantive agreements would come to fruition from Trump’s talks with Kim.

“We want to see a denuclearization of the Korean peninsula, a reduction in these missiles but it’s not as easy as just going and, you know, bringing a hot dish over the fence to the dictator next door,” Klobuchar said on CNN’s “State of the Union.” “This is a ruthless dictator and when you go forward, you have to have a clear focus and a clear mission and clear goals.”

Castro, who has seen a boost in his profile since Wednesday night’s debate, also lambasted Trump for “raising the profile of a dictator like Kim Jong Un” without any substantive gains being made.

"It's worrisome that this president erratically sets up a meeting without the staff work being done,” Castro said during an appearance on ABC’s “This Week.” “It seems like it's all for show; it's not substantive.”

The former Secretary for Housing and Urban Development added: "I am all for speaking with our adversaries, what's happened here is this president has raised the profile of a dictator like Kim Jong Un and now three times visited with him unsuccessfully because he’s doing it backward.”

Kim is suspected of having ordered the killing of his half-brother through a plot using a nerve agent at a Malaysian airport in 2017. Meanwhile, the United Nations said in May that about 10 million people in North Korea are suffering from "severe food shortages" after the North had one of the worst harvests in a decade.