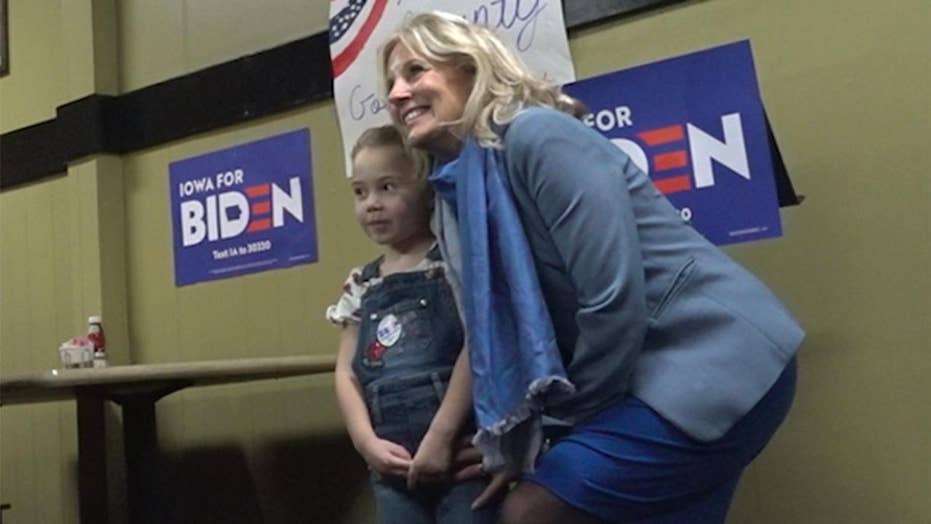 The Democrats running for president are turning to their significant others to build support and maximize one-on-one time with voters with weeks to go before the Iowa caucuses.

DES MOINES, Iowa -- The Democrats running for president are turning to their significant others to build support and maximize one-on-one time with voters with weeks to go before the Iowa caucuses.

And some candidate-spouses are now even headlining events on their own.

“We believe in every student that we teach," Mann said. "And what Elizabeth translates to the campaign stage is that she believes in everyone who is listening to her and wants them all to be a part of this."

Entrepreneur Andrew Yang’s wife, Evelyn, has taken on more public speaking engagements lately. Last week, in New Hampshire, she spoke at an event about family and autism and advocated some of her husband’s platforms.

“It’s absolutely critical that families like ours have access to things like therapies and childcare, and Andrew is again the only person running for President to talk about this,” said Yang.

She also made waves Thursday by revealing how she was sexually assaulted by her OB-GYN during medical exams when she was pregnant with their first child.

However, no spouse has adopted a more public role than Jill Biden, the wife of former Vice President Joe Biden. Though she teaches English at a community college, the former second lady has taken a leave of absence for the next four months. With a schedule almost as extensive as her husband’s, Biden and her small staff have been crisscrossing early states like Iowa and New Hampshire hoping to win over voters.

“I see it as a partner in a marriage. He supported me. And, now, I’m supporting him. That’s what a marriage is about,” Biden said in a recent interview with Fox News.

On the campaign trail, Biden often touts her husband’s electability, positing him as the best candidate to beat President Trump.

“I want all of you who are on the fence. I want to ask for you to give Joe a chance. I want you to think about it. But, I have to tell you. He’s the only one who can beat Donald Trump in the November election,” Biden said recently to a group of voters in Guthrie.

Every interaction gives a candidate’s spouse the opportunity to make an impact in a race where many caucus-goers remain undecided -- and value personal interactions. Biden is making stops in rural Iowa, places where support could give her husband an edge to win on caucus night.

BIDEN ON TOP IN IOWA WITH 3 WEEKS UNTIL CAUCUSES, LATEST POLL SHOWS

“It’s surprising to me because I think I’m a pretty decisive person. But, I respect Iowans because they take the process very seriously,” Biden said.

With a schedule almost as extensive as her husband's, former Second Lady Dr. Jill Biden has been crisscrossing the Hawkeye State, making stops in rural districts where support could give her husband an edge to win on caucus night. (Fox News)

An average of recent Iowa polls shows the race in a dead heat, and some top-tier candidates are sharpening their attacks as they aim to draw contrasts among themselves. Vermont Sen. Bernie Sanders slammed Joe Biden’s “weak” record, warning Democrats that his candidacy won’t excite the base enough to beat Trump.

“I think we need to have civil discourse. I think that it’s really important that we respect the process and just stick to the high road,” Jill Biden said.

"I think it's a close race. We're out here in rural America. We're in other first states like Nevada and South Carolina and New Hampshire, and I feel Joe's going to win," she added.

The campaign trail often keeps the married couple of 42 years apart. But, when they’re not campaigning, Biden said they’re “just like every other married couple.”

“I saw him maybe a week ago, and we just kind of tried to catch up. How are the kids? What’s going on? The dog went through a hole in the fence. I mean, just typical, everyday, ordinary things. You know, we don’t just sit down and discuss policy. It's just what you discuss with family,” Biden said.

Though the candidates may occasionally exchange jabs, Biden says the vibe among the spouses is cordial.

And, despite slight differences within the party, Biden says they share a common goal, which largely keeps her motivated.

“The one thing that keeps me inspired and invigorated is the people I meet," Biden said. "I mean, everywhere I go, I meet people who have stories that are unique or inspiring and sometimes stories that are sad to listen to. But, you know, everybody is looking for new leadership to help, to try to solve their problems. And, I think the question of leadership is really what’s on their mind."